The first posts about Kevin Clash, the voice of Elmo, appeared on my Facebook feed late in the afternoon. Reading the articles was disheartening, depressing and downright sad. And each article (from mostly quasi-reputable sources) was capped by one inflammatory headline after another. It seemed they were all trying to cram as many damning words into a single line as possible: “Sex,” “Denies,” “Underage Boy,” “Pedophilia,” “Gay.”

So I went in search of a more respectable source, one that would stick to the facts. I came upon what I hoped would be such an article from ABCNews. No such luck. Here are a few of the questionable—and some completely irrelevant—phrases peppering the story:

Clash…began using a falsetto voice in 1984 to bring life to the furry red monster.

The accuser…is being represented by…the same high powered firm hired by a victim of Penn State coach Jerry Sandusky, who was convicted of child sex abuse.

Clash spoke to ABC News last year about his passion for puppets… “I have Peter Pan syndrome we call it,” Clash said.

After learning how to sew around age 9…

“‘You sleep with your puppets, you play with dolls,’ you know,” Clash said of being teased as a kid.

Let me state that I have never been that fond of Elmo. I grew up on Bert & Ernie, The Count and Cookie Monster. Elmo is a relative newcomer, and has always seemed way over-hyped and unendingly shrill.

But then last year I saw Kevin Clash on The Daily Show promoting Being Elmo, and was amazed at his energy, his spirit, and his undeniable talent. When I finally watched the documentary I was genuinely moved by this story of an odd, sensitive, creative (and extremely driven) boy that pursued his dream of being the next Jim Henson. Clash became hugely successful at not merely entertaining or educating, but spreading joy wherever he went. 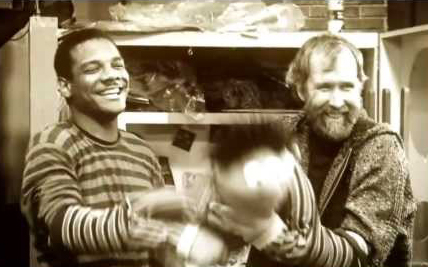 A young Kevin Clash with his idol and mentor, the late Jim Henson

I sincerely hope the accusations are untrue. Yet if the level of hyperbolic coverage surrounding this continues, it kind of doesn’t matter. Kevin’s career as Elmo (and in children’s entertainment) is over, regardless of the outcome. I just can’t imagine the talking heads and paranoid corporate sponsors will allow the truth to win out.

In response to the story, Sesame Workshop is quoted as saying, “Elmo is bigger than any one person…” But if you watched Being Elmo (and you should), you know this isn’t true. Elmo existed for several years before Kevin Clash, but Kevin Clash brought Elmo to life, imbuing him with a toddler’s wonder and loving spirit. It would be a shame for such a lively life to be stifled by the flames of homophobia, fear and sensationalism.

CAN’T WE ALL JUST GET ALONG? 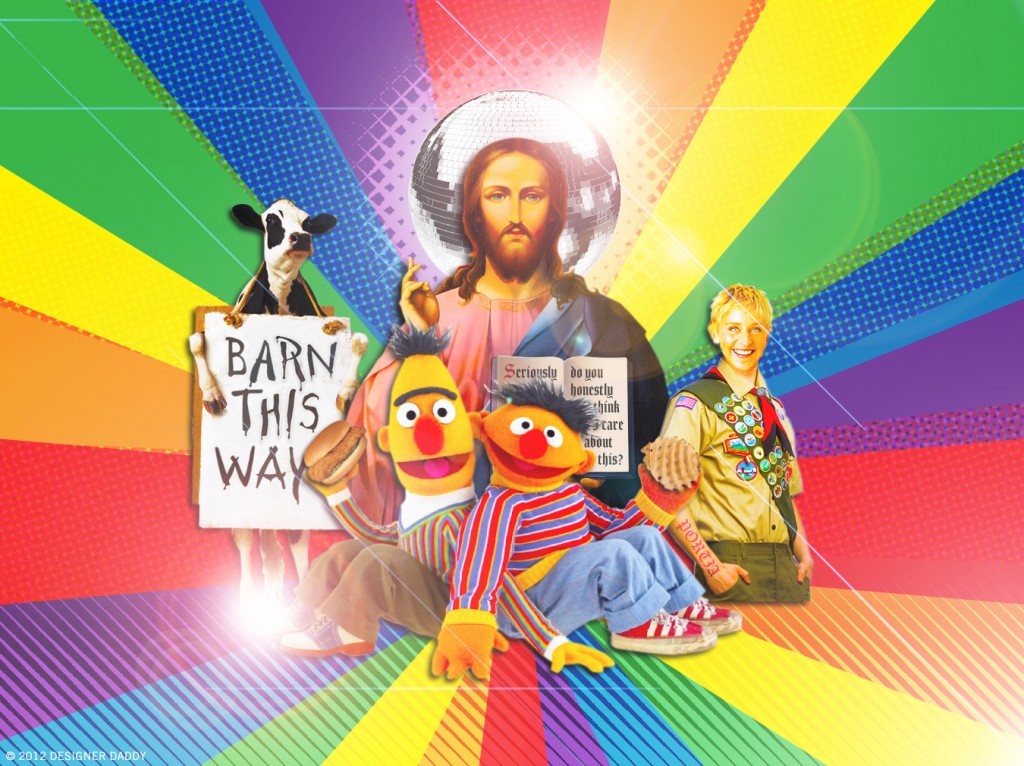 Click pic to view in all its full-sized, technicolor glory

Well, I thought I was going to just post this photo and leave it at that… no such luck.

My inspiration for this collage was thinking about how ridiculous this all seems — chicken sandwiches vs. gay marriage vs. Muppets vs. Huckabee vs. the mayor of Boston, with some scouts thrown in for good measure. Yet regardless of the silliness of this cultural cockfight, same-sex marriage is obviously an important issue to me. And obviously to a lot of people, based on the amount of discussion it’s sparked in real life and on the Interwebs.

Full disclosure: I began frequenting Chick-Fil-A during my stint in Texas, then stopped going several years ago…but for gastronomical reasons more than any other. The company has every right to sponsor Christian organizations, close on Sundays, dress up cows in sandwich boards. But someone over there is going out of their way to make sure I’m not able to marry my partner of 15 years, preventing us and our son from having all the legal benefits — not to mention social acceptance — straight couples and their children are allowed. And that deserves a response.

I don’t know if it’s what Jesus would do, but it sure beats fighting the crowds for a cheap chicken sandwich.

Every year for the last ten or so, I’ve made a mix of Christmas music for the drive to my parents’ house. This is JJ’s third Christmas — and he’s become quite the verbal and musical sponge — so this year’s mix is geared mainly towards him. A Christmas Mix 101, as it were. 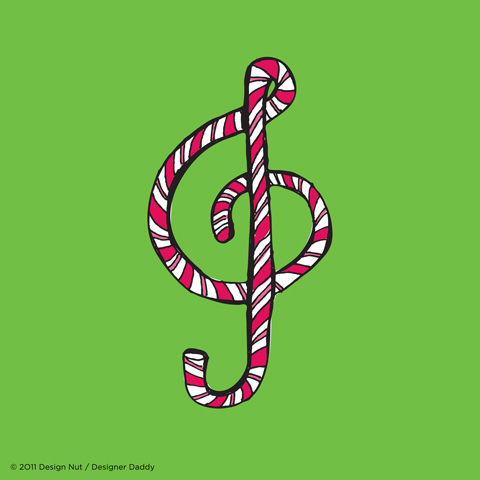 1. Jingle Bells – Frank Sinatra (Bonus points for Old Blue Eyes teaching JJ how to spell “Jingle Bells.” And sorry Babs, but your version’s too frenetic for a toddler. And don’t watch the link if you’re prone to seizures…)
2. Welcome Christmas – from How The Grinch Stole Christmas (starts at 5:30 on the clip)
3. The Chipmunk Song (Christmas Don’t Be Late) – Alvin & The Chipmunks
4. Rudolph The Red Nosed Reindeer – Burl Ives
5. Little Drummer Boy – Peggy Lee
6. Frosty the Snowman – Dan Tyminski
7. Here Comes Santa Claus – The Puppini Sisters
8. The Friendly Beasts – Sufjan Stevens (If you don’t have Sufjan’s Christmas box set, you must. I’d buy it again for the packaging and sheet of stickers alone.)
9. Linus And Lucy – Vince Guaraldi Trio (“Christmastime Is Here” is probably more recognizable, but it’s a little depressing. And nothing beats the Peanuts gang’s wacky dance party.)
10. Santa Claus Is Coming To Town – Fred Astaire
11. All I Want for Christmas (Is My Two Front Teeth) – The Nat “King” Cole Trio
12. Feliz Navidad – José Feliciano (part of JJ’s unofficial Spanish immersion program)
13. Mele Kalikimaka – Bing Crosby with The Andrews Sisters (…and his Hawaiian immersion. I wonder if the Obamas sing this at Christmas?)
14. Over the River and Through the Woods – The Chipmunks (Grandma literally lives over a river and through some woods. Just wish I could find a less annoying version of this ditty, which by the way was originally a Thanksgiving song.)
15. Carol of the Bells – The Bird and The Bee
16. Dominick The Donkey – Lou Monte (In honor of JJ’s Nonno Dominick, whose birthday is today!)
17. Christmas Is Coming – John Denver & The Muppets (Can’t wait to teach JJ to sing in a round!)
18. Joy To The World – Nat King Cole
19. You’re A Mean One Mr. Grinch – Thurl Ravenscroft
20. Dance of the Sugar Plum Fairy – London Symphony Orchestra (In honor of Daddy’s favorite Christmas character)
21. The First Nöel – Annie Lennox
22. Sleigh Ride – Relient K
23. Let It Snow – Michael Bublé
24. Hark The Herald Angels Sing – Vince Guaraldi Trio (Everybody now, “Loo, loo, loo…”)
25. Jingle Bells – The Singing Dogs (Cordi perked up for this one)
26. Silent Night – Sixpence None The Richer
27. Twelve Days Of Christmas – John Denver & The Muppets (It wouldn’t be a Christmas road trip without something from this CD. JJ applauds at the end of this classic gem every time.)

What songs did your family grow up on? Any others you’d recommend?

Like any perfect parent, I have kept JJ from watching TV before the age of two, since pediatricians recommend they have very limited exposure up until that age. Umm… no. Like any good American, TV is my back-up entertainer, schoolteacher and tranquilizer. It’s how I was raised, and I turned out okay. Ish.

Also like any good American (of a certain age), I learned the most from Sesame Street. Counting. ABCs. How to tell when one thing is not like the other. And of course Spanish. Mucho, mucho Spanish.

And speaking of Spanish… There are a lot more options vying for my toddler’s attention, and Sesame Street is pretty low on his radar. Not so low—much to my chagrin—is Dora. You know, The (bilingual) Explorah. As a designer, I must say the animation is pretty abhorrent (what’s with the disembodied eyebrows?!?) As an adult, the repetitiveness of the dialog drives me loco. And the whole talking to the kids through the screen bit? Very creepy.

But as a parent, I must admit JJ has learned quite a bit, from this adventuresome tot and her boot-wearing monkey. Probably because they hammer it into his tiny, impressionable skull. And unfortunately not a lot of what he learns is very useful.

So a big ¡Gracias, pero no Gracias! to Dora for teaching JJ such essential words as: 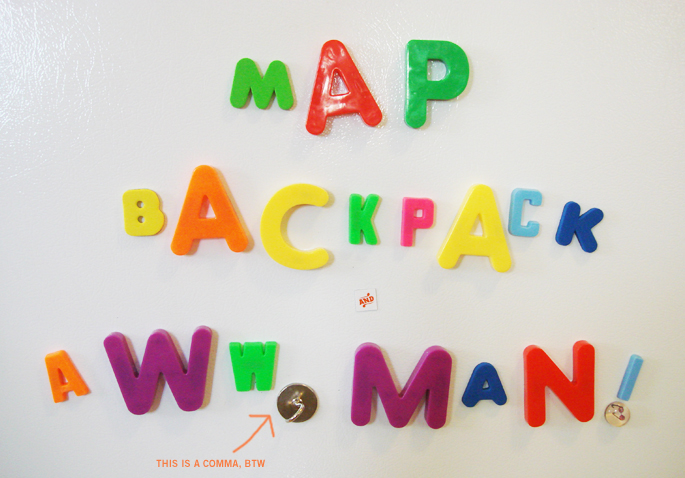 How about teaching some phrases helpful in everyday life? Something like: 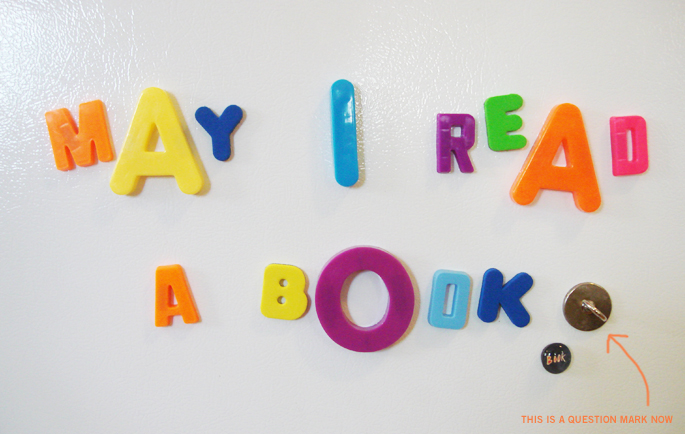 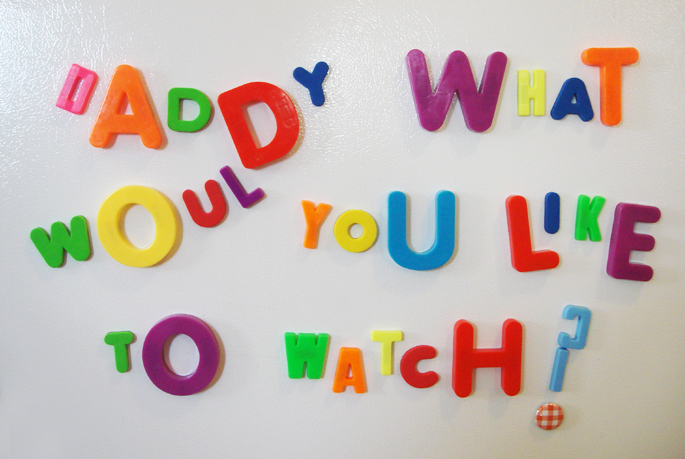 So what random and totally pointless thing did your rugrat learn from the boob tube? 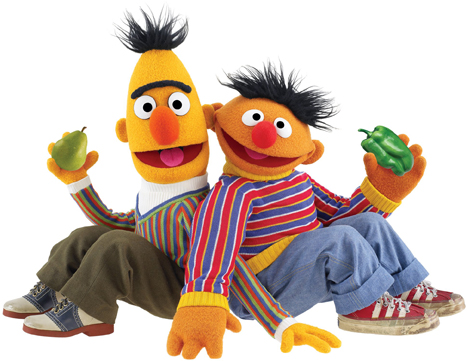 Yesterday the news cycle was peppered with the anecdotal silliness of a petition started to let Bert and Ernie get married. Today’s response is brought to you by the letters A through C.

A: I of course wholeheartedly agree with the idea of having LGBT characters / same-sex couples represented on Sesame Street. I’ve been watching children’s television pretty much daily for the last year, and I’ve only seen one fleeting reference to two dad or two mom families anywhere. (The video below runs occasionally on Nick Jr. The family in question shows up at the 1:11 mark.)

The thing is, non-platonic relationships are extremely rare among Sesame Street’s furry folk. True, Kermit has had a decades-long tumultuous affair with Miss Piggy, but that’s only been in the context of The Muppet Show. The characters on Sesame Street, other than (kind of) having a gender, don’t even really have specific ethnicity. Except for The Count, who I guess is Transylvanian.
END_OF_DOCUMENT_TOKEN_TO_BE_REPLACED