Bath Toys: When to Keep, When to Trash

Thanks to Netflix and Hulu, JJ has been watching bits of TNMT and Power Rangers, which induces lots of karate-chopping craziness, and which I do not love. So I convinced him we should scroll down the cool Netflix “By Character” menu, and JJ re-discovered one of his (and my) early favorites, RubbaDubbers.

Inspired by this welcome regression, your old(ish) pal Designer Daddy has whipped up this handy chart to help you cull that tidal wave of crap bath toys amassing in the tub.

Be sure and click on it to enjoy all its squeaky clean wonderfulness. And because teeny, tiny type. 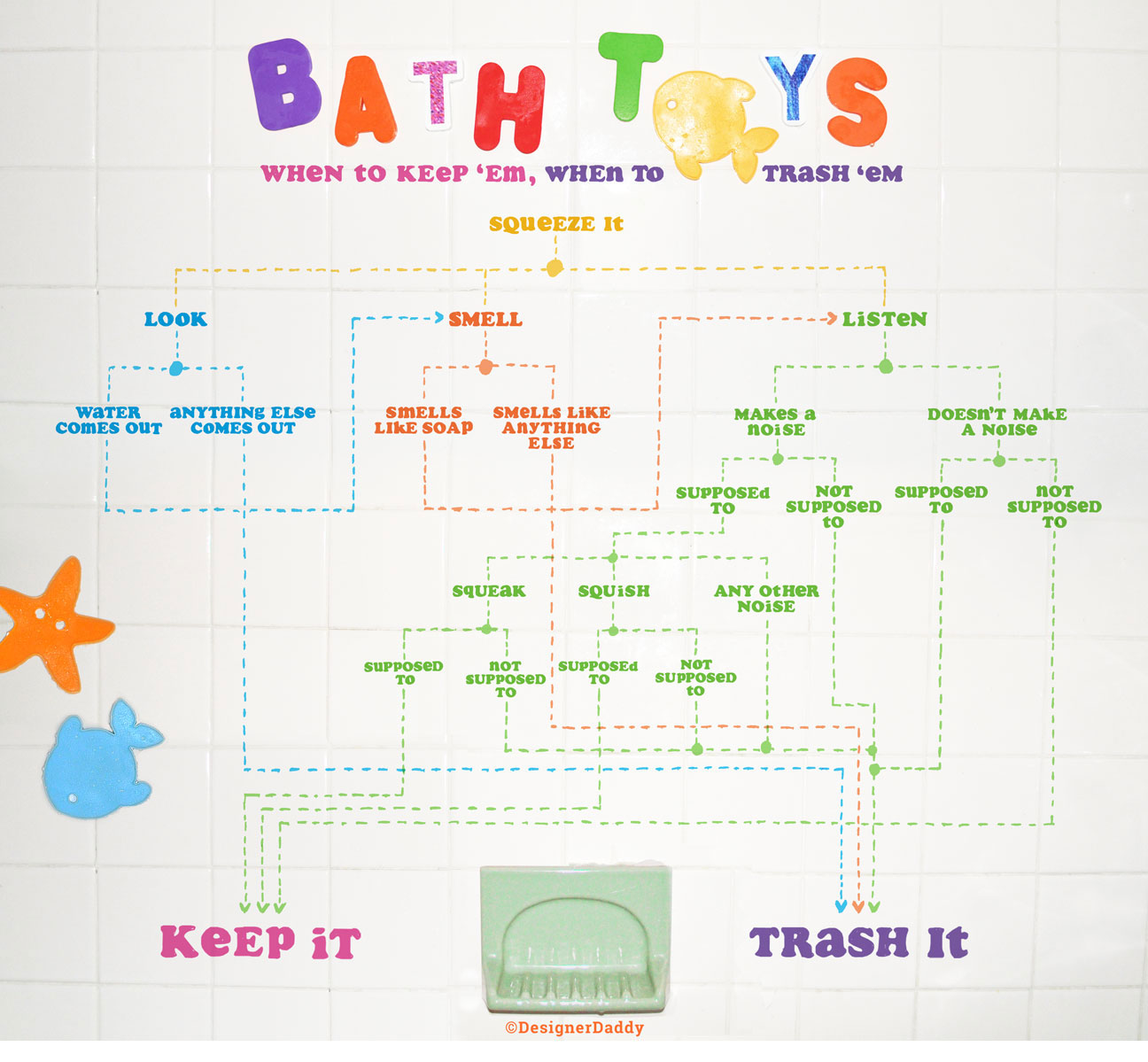 Some of you may be thinking, “But what if I want to CLEAN the bath toys instead of just throwing them out?”

I have a couple of suggestions for you:
A) Ain’t nobody got time for that!
B) My pal over at The Daddy Doctrines did a post recently on cleaning nasty bath toys.

Music may soothe the savage beast, but humor and distraction are more effective in getting the beast to do what you want. I may not do many things well, but I’ve gotten pretty good at keeping my toddler laughing and sidetracked in order to keep him safe and moving along in life. I found very early on that “Because Daddy said so” don’t mean squat.

One of the most consistent struggles has been teaching JJ to brush his teeth. Sure, it’s easy enough to get him to turn the water on (and proceed to drench himself and the entire bathroom) or to get the toothbrush in his mouth (and then suck every ounce of toothpaste off it). But to get him to use the brush for its intended purpose, I turned to two of JJ’s favorite things: zoo animals and YouTube.

I used to hold my son in my lap while brushing his teeth — but he got older and wanted to stand on his stool and hold the brush himself, and I lost control of the situation. I needed to regain control, but in a non-confrontational way — so I came up with a routine… Hint: each step should be announced with much fervor and glee:

Open mouth wide and brush the tops/bottoms of all your teeth.

Gigantic closed mouth smile, showing off those pearly chompers, then scrub back and forth to get the outsides clean.

Stick your tongue waaaay out for a good scrubbing.

Sometimes messy — but obviously his favorite — so never gets skipped.

It was an immediate success, so the next morning I pulled together some visual aids (EDUCATIONAL BONUS!) from YouTube to further bring the point home. I’m sure there are better videos out there, but these (below) worked just fine for us and were relatively easy to find.

We also got this wonderful firsthand experience on our trip to Italy: 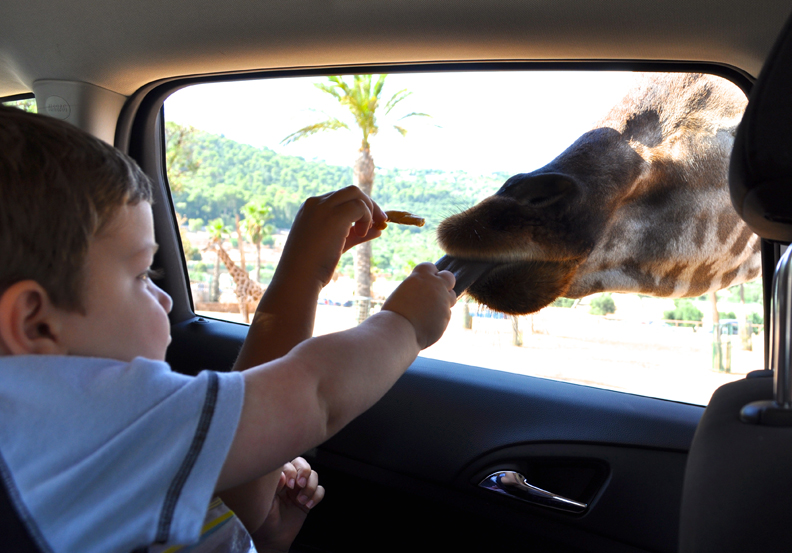 JJ and his cousin feed a giraffe a piece of taralli through the car window.

.
On the rare occasion humor and distraction fail to work, fear is a good backup motivator. If we ever have trouble with JJ at teeth-brushing time, we just ask “You don’t wanna have Joker teeth, do you?!?” 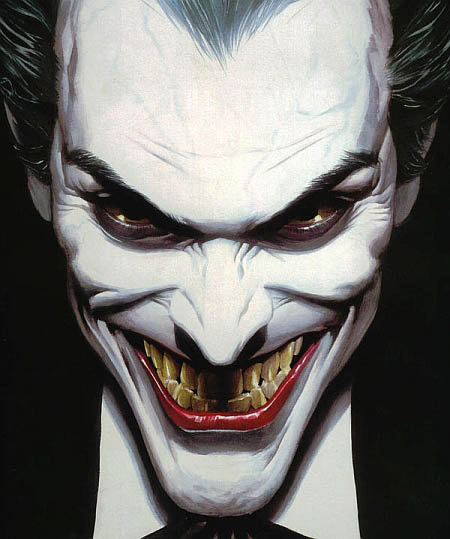 What tactics have helped you in the art of tooth brushing? Happy Hygiene!

Fridge Wisdom: Regarding the dog’s butt

I’ve found this phrase pretty useless in teaching my toddler just about anything. Yet it’s one of the top 10 (if not the #1) default commands parents use when trying to bring their wee ones in line. I know I’ve certainly spouted it at JJ in desperate situations, and always to no avail.

What was lacking? Specifics.
“Don’t poke the dog in the butt.”
“Bite your food, not your hand.”
“Those are Daddy’s toys. Please don’t remove them from their original packaging or they lose their value.”
“Buddy, no rocking the extremely large, expensive TV back and forth.”
“Stop touching that. It’s got poop on it.”

Niceness (like sharing) is nebulous and subjective. The dog’s butt is not.

JJ LOVES to brush his teeth, and I’m just going to go ahead and give myself a lot of the credit for that. There are still many fatherly things I haven’t mastered. But through persistence and creativity I’ve made this one activity both fun and productive. Here are a couple of things I’ve found help make toothbrushing your toddler a less painful ordeal.

1. Buy this awesomely fun toothbrush. A while back I blogged about the Crayola light-up toothbrush. Well, the red one started to wear out, so I got JJ two — one in each of his favorite colors. (Well, it’s two of the three colors he knows at the moment.) Now whenever it’s time to brush, he gets a choice. Plus I get to hear him say “gwee” (green) or “puh-pah,” (purple) which never ceases to be über-adorable. 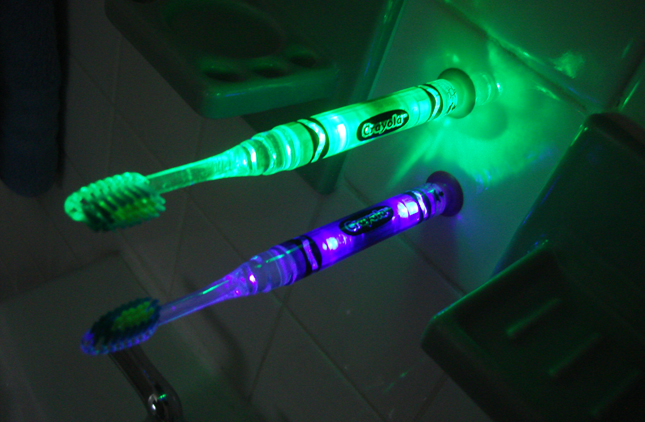 2. Buy this awesomely funny book. I originally bought “Pony Brushes His Teeth” — and a couple of others in the series — for the wonderful illustrations by Oriol Vidal, but liked this one in particular. Not just because it was pertinent to an issue we were currently dealing with, but because I was pleasantly surprised to find this story involved an activity with a little pony (no, not THAT little pony) and his Dad. 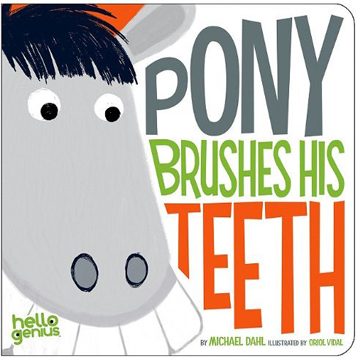 Each of the spreads involves ‘lil pony doing something with Dad pony, starting with eating and then going through all the steps involved in brushing teeth. I found it fun and refreshing to see a youngster and his Pop doing something together that wasn’t sports- or car-related. Good to see a father (even if in equine form) participating in the day-to-day life of his child. 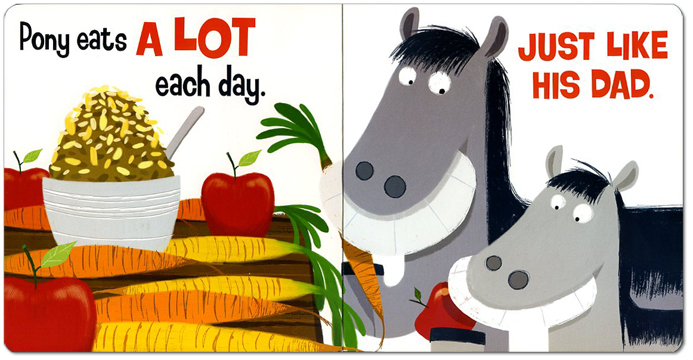 The book ends with Lil’ Pony spitting on poor old Dad. Which makes me very curious as to what happens at the end of the Duck Goes Potty book… 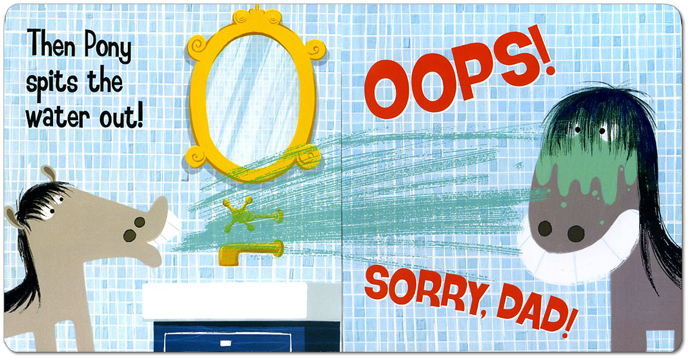 DooDad of the Day: If Tron had a toothbrush 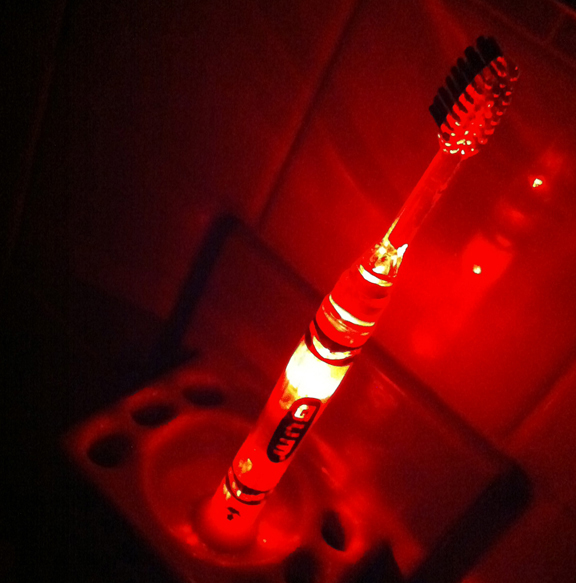 On a recent cross-country-in-a-plane family trip (what were we thinking?) — after having our flights delayed multiple times, two trips to the airport, an inordinate amount of airport/airplane food, we finally arrived at our destination to discover our luggage had (shocker!) not made it. We had to wait a full 24 hours for it to be delivered, somewhat safe and sound. The one bright light in all this (aside from our gracious hosts and an impromptu shopping trip to Target) was the fun toothbrush said gracious hosts gave JJ to use.

The GUM Crayola Timer Light Toothbrush has been around for several years it seems, but as I keep saying — none of this stuff was on my radar before, so indulge me. And not only is it a hoot to use, but it achieves what it promises! Kids (at least ours) will brush longer as they are entranced by the flashing crayon protruding from their maw. For older kids (it’s officially for ages 4-11) the light serves as a timer to let them know to brush until the flashing stops (60 seconds). For my little rug rat, it’s just plain entertainment.

Plus, it’s got a suction-cup base, which is great since no toothbrush that’s been sold since 1970 (or that costs more than 50 cents) fits in a standard toothbrush holder. (And yes, it sticks up horizontally, too…) 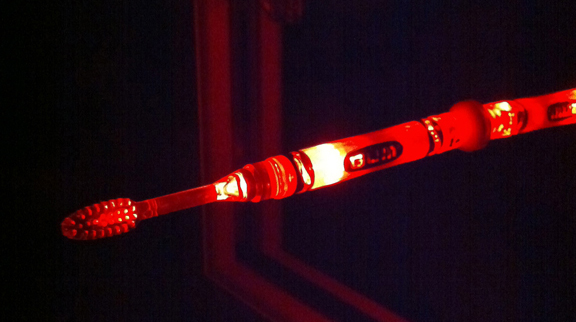 One question I have though… does this not inhibit kids from kicking actual crayon eating?