END_OF_DOCUMENT_TOKEN_TO_BE_REPLACED

Christmas is often idealized as a time of reflection, to pause and consider life, family, world peace — lightweight stuff like that. But I can’t remember the last time the days between Halloween and New Years resembled anything remotely meditative or peaceful.

I could blame consumerism, box stores and maga-malls; the colder, shorter days; my rambunctious 5-year-old; Obama. But if I’m being honest, it’s all my own doing. If there’s going to be any inner dialog, it’s on me to stop and listen. So one recent evening I sat in view of our tree* and took it all in. Glowing lights in our dimly lit dining room, twinkling and reflecting off the orbs and odd shapes adorning a sweet-smelling fir. I let my eyes wander from ornament to ornament, remembering where and when they were purchased, what was happening in my life. It was like spending time with old friends — you may not see one another very often, but your history is deep and your reconnection easy.

In taking these moments, in making these observations, I came to realize some of these baubles were among my oldest possessions. Outlasting furniture, clothes, photographs, albums, books. Tokens from nearly every year of my life hung from this tree. It was a feeling both comforting and weighty — but it had given me the space and peace of mind I’d been seeking. 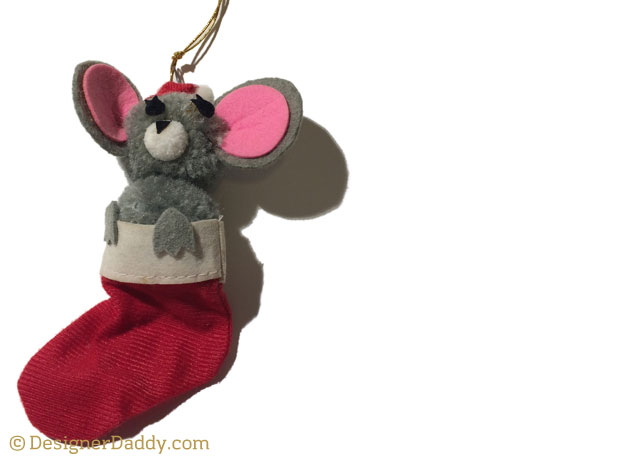 Mouse, circa 1976
I’ve owned this mouse made of felt and yarn longer than anything else in my possession. I don’t know exactly where or when it was purchased, but I’ve always known it as being from my brother. The photo may not show, but it’s yellowed and frayed in spots. Yet I’ll hold onto it as long as I can, clutching close the memory of our childhood, our innocence and friendship, before dogma and condition and uncomfortable silence took its place. And I’ll hold a little hope that some of the former will return.

END_OF_DOCUMENT_TOKEN_TO_BE_REPLACED 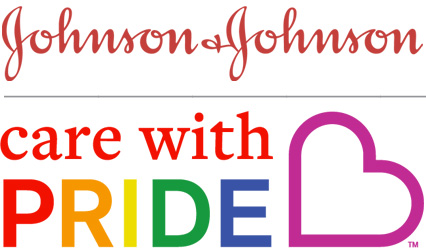 Since 1954, this has been the promise of Johnson’s baby shampoo — a brand and a phrase synonymous with childhood. Johnson & Johnson is committed to that same promise when it comes to bullying and its prevalence towards LGBT youth.

Long known for supplying the staples of parenting and family life, Johnson & Johnson extends this support to LGBT families with their CARE WITH PRIDE campaign. For the third year, J&J has partnered with charities to promote, support and protect LGBT parents and students. This year the beneficiaries include PFLAG, The Trevor Project and Family Equality Council, and by the end of 2014, it’s projected that CARE WITH PRIDE will have raised more than $500K since the program began in 2012.

Central to the campaign is the issue of bullying. Nearly one in three students report being bullied during the school year. For LGBT youth (or those believed to be), the figure rises to eight out of 10 who are verbally harassed, and four out of 10 are physically harassed at school. This doesn’t account for abuse that takes place outside the school, or the countless occurrences that go unreported. And it probably goes without saying (but it won’t) that bullied students are at higher risk of depression, anxiety, sleep difficulties and poor school adjustment. And most tragically, LGB youth are four times more likely to attempt suicide as their straight peers. One quarter of transgendered youth attempt to take their lives. And each episode of LGBT bullying or abuse increases the likelihood of self-harming behavior by 2.5 times on average.

PFLAG, The Trevor Project and Family Equality Council play a vital role in the fight against bullying by providing education, raising awareness and promoting equality for LGBT families.

END_OF_DOCUMENT_TOKEN_TO_BE_REPLACED

Narrowing down the photos I wanted to share from our big gay wedding was a daunting task — too many wonderful images and memories to choose from! So I’ve divided them into two albums representing my Gemini-esque personae: Designer and Daddy.

This one — the Designer Album — features details, graphics, colors and all the minutia I obsessed over to make our special day a little special-er. You can see the Daddy Album here. And thanks for your patience — I had to wait nearly 17 years to legally marry the man I love, so I figured folks could wait a few days to see more pics of my adorable kid. 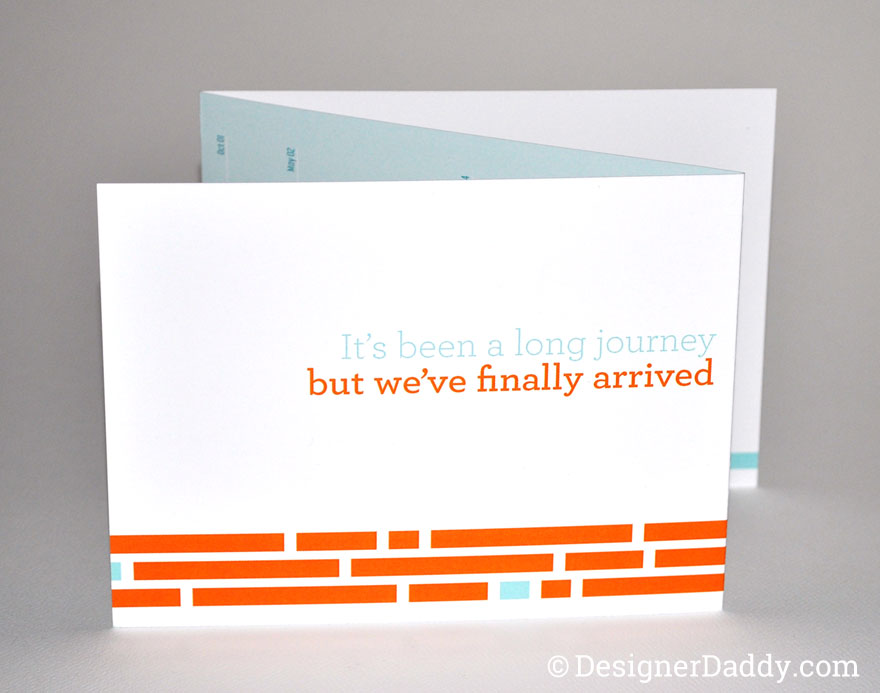 YOU’RE INVITED. From early in the planning stages, it was obvious to Papa and I that a marriage between two people that had been together for 16+ years should get some props for longevity. There weren’t going to be doves descending from the heavens and whisking us away to a magical happily ever after. This was about commitment and family and roots and the journey it took to get here.

So I came up with a stylized brick motif. Bricks may not conjure romantic imagery, but they are vitally important in that they build roads for life’s travels and the foundation for a home. They fit and work together to guide, protect and stabilize. 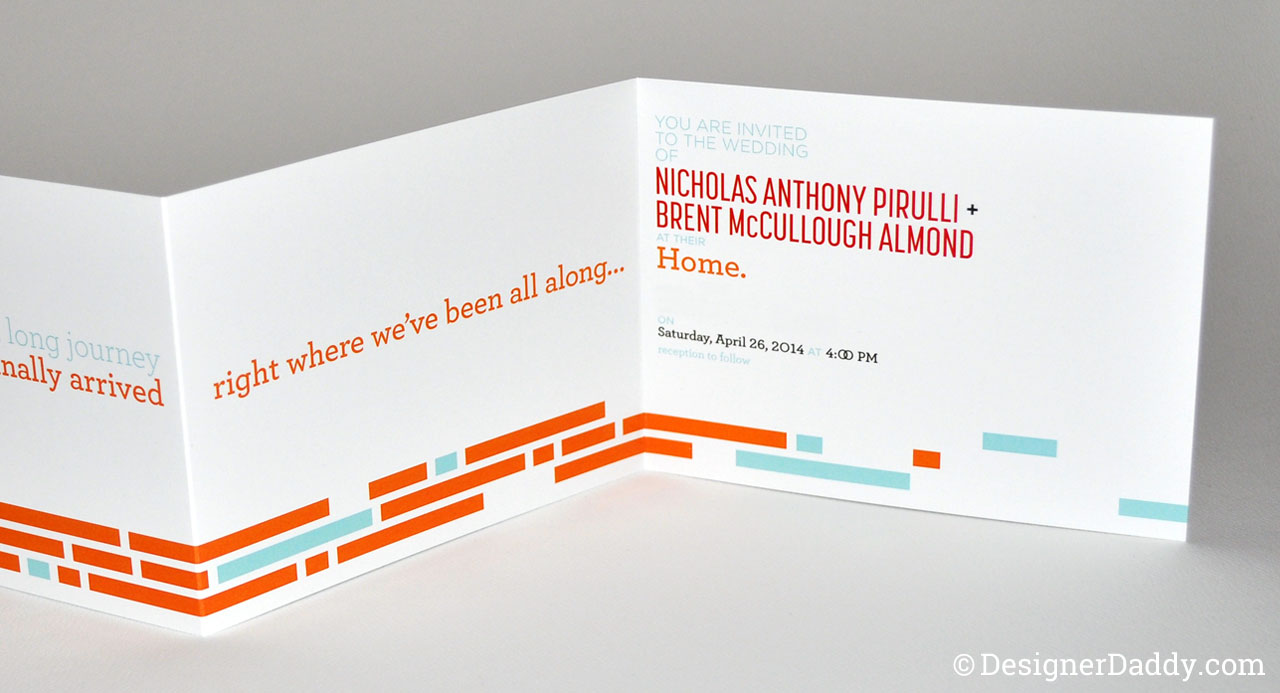 The front of the invitation unfolds to reveal a “road” leading us home.* I wanted to not only communicate the ceremony would be at our house, but also emphasize the importance of home to our relationship and our family. It also set the tone for the celebration — warm, informal and all about the love.
.

So let’s get to the photos of the actual day, shall we? By the way, the fabulous Piper Watson shot all of the wedding day photos. Please hire her — she is a sweet photographer and an even sweeter spirit.

END_OF_DOCUMENT_TOKEN_TO_BE_REPLACED

A Taste of Wedding Cake

I’m back from a weekend of weddedness, and wanted to pop in to say how truly blessed I am… with a wonderful (LEGAL!) husband, a precious son, devoted family & friends — and an awesome outpouring of love and well-wishes from all of YOU out in Internet-land! Seeing your myriad of comments, likes, tweets and all-around cyber-support contributed to what was pretty much a perfect day. 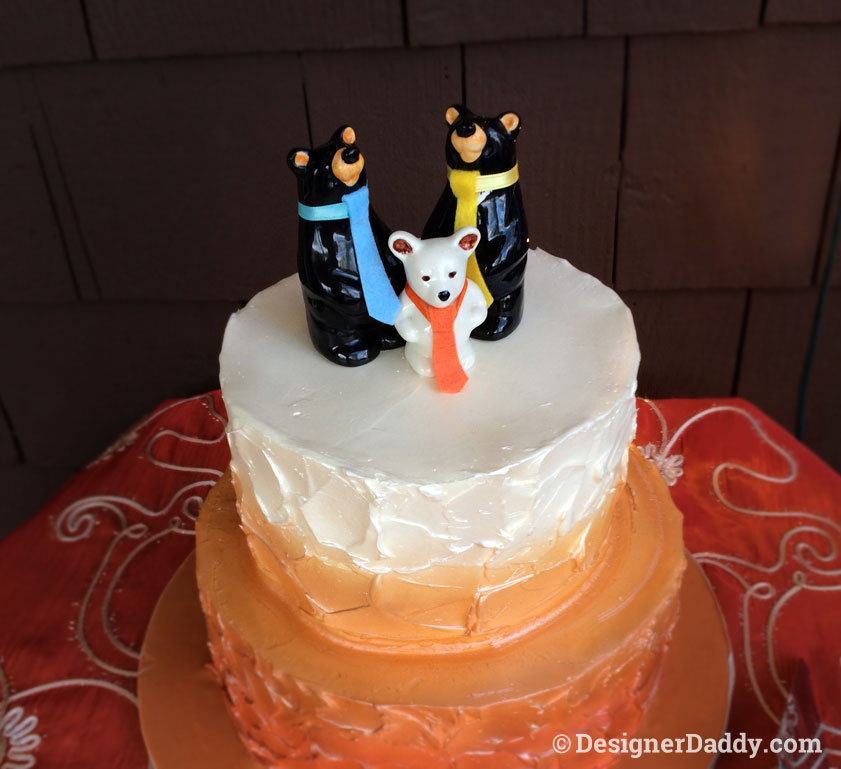 .
There are photos and details and heartfelt reflections to come, however today I shut my brain and body off to reboot. But I wanted to at least give you a little taste — of our wedding cake!* The Daddy & Papa bears (which are salt & pepper shakers) topped the cake at our commitment ceremony 10 years ago. As it was in a church and more of a formal affair, they were dressed in white top hats and bow ties. Our wedding this past Saturday was more about home and family. We had it in our backyard and were a little more casual, so after hunting down a small bear to represent JJ (and painting on some eyes, ears & nose) I made them all neckties out of ribbon and felt to match the actual colors we wore.

And oh yeah, the bottom layer of the cake was vanilla, the top layer was pumpkin, and it was ALL delicious.

END_OF_DOCUMENT_TOKEN_TO_BE_REPLACED

A (not so) Brief Note

We’re currently trudging towards the epic milestone of bowel autonomy. JJ had one rapturous success, got derailed (understandably so) by our trip to Italy, and has yet to regain his commode momentum. We’ve employed several potty training tools, which so far have produced squat in the way of results. But I thought I’d share them with you since I think they’re fun. And who knows — hopefully they’ll work for someone else in the same, um… poodicament*.

This book is all kinds of awesome — each page features a different DC superhero explaining some aspect of potty training (Superman blows away a giant stack of diapers! Plastic Man shows how much toilet paper is the right amount! Flash warns to give yourself enough time to get to the can!) Many of the pages have flaps for your child to reveal more fun and action, and there are 2 full pages of stickers! The book is nice and thick and well-laminated to avoid any bathroom mishaps or accidental drops in the tub/sink/commode. ($8.99 on Amazon) 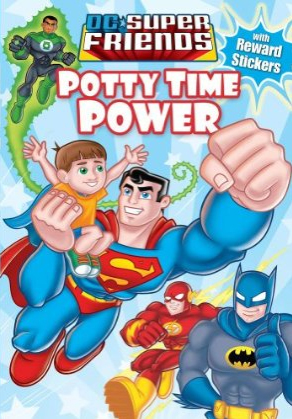 And oh yeah, my man Aquaman gives a lesson (kind of) on the importance of washing up afterwards! 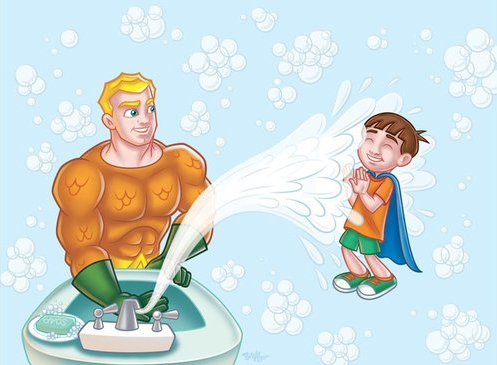 So far the book hasn’t “worked,” but its repeated use has helped JJ’s spelling. And the fact that it’s chock full o’ heroes makes it a wee bit more bearable for me to read over and over and over.
END_OF_DOCUMENT_TOKEN_TO_BE_REPLACED

Cutest Books Ever. EVER.

These are — hands down — the cutest books ever. Ever. EVER.

In case I’m not making my point clearly, let me explain…

I happened upon “In My Pond” on one of our many pre-JJ shopping sprees. I was immediately smitten by the wonderful illustration style. I was further smitten by the adorable die cut holes getting smaller with each page, revealing different scenes and all the while featuring a delightful felt fish that leads you through the story.

You can imagine my surprise (I think there was squealing involved) when I got home and realized the little felt fish WAS A FINGER PUPPET. You put your finger through a hole in the back and wiggle the little goldfish while reading the book, turning the page with your other hand.* Smittenest.