The Rockabye Baby! series of lullaby-style pop songs is must for any parent raising a musically literate kid. While I appreciate the ever-expanding catalog (from Johnny Cash to Madonna to Wu-Tang Clan), my go-tos were two volumes of songs by The Beatles. The timeless tunes translate perfectly into baby-fied instrumentals, and what better way to soothe my tot to sleep than with the greatest band of all time? Golden Slumbers, indeed.

.
STAND BY ME SOUNDTRACK by various artists (1986)

These classics collected from the 50s and 60s became a favorite of both mine and Jon’s during his diaper-changing days. Nothing calmed and entertained my wiggly youngster quite like “Everyday,” “Yakety Yak,” and “Mr. Lee.”

Pro tip: if you’re going to finger-pop the inside of your cheek during “Lollipop” (like they do in the scene below), be sure you’ve wiped the Desitin off your hands first.

I made a lot of mix CDs during my early years of fatherhood (compact discs weren’t that long ago, kids). One such puppy-themed mix included an all-time favorite, George Clinton’s funktastic “Atomic Dog.” You should have seen me beam with pride the first time my toddler uttered his first “Bow-wow-wow, yippie-yo-yippie-yay.” Who’s a good boy!

You may notice from most of this list I’m not big on children’s music. To be fair, there are a few artists I dig. However, most kid’s music strikes me as too earnest and corny.

Yo Gabba Gabba is the exception. In addition to being a freaky fun TV show, YGG is also a treasure trove of musical gems. Each episode features an original song by a slew of too-cool-for-school indie bands; but the true earworms are the cast-performed songs.

“Don’t Bite Your Friends” is a great bop with a message, and “I Love Bugs” is a fly, down-tempo groove. But nothing brings the fun like “Party in My Tummy.” Call-and-response menus set to a delicious hip-hop beat? Instant dance party every time!

The greatest superhero TV theme song of all time — fight me. Or better yet, watch my young ward bring this classic ditty to technicolor life.

Some of the best musical memories with my son involve driving around in my convertible, blasting his current favorite song for the fourteen-thousandth time. There’ve been many others since, but “Ghostbusters” is his first “top down” favorite. It didn’t hurt that this was also his favorite movie AND Halloween costume.

Batman was my son’s first favorite superhero, but Spider-Man clung to the top spot for a lot longer. Spidey also had quite a few songs to fuel the fandom. “Ode to a Superhero” is amazing on several levels in that it a) recounts the plot of 2002’s Spider-Man film, b) introduced my kid to the genius that is “Weird Al” and c) exposed him (albeit subversively) to Billy Joel’s “Piano Man.”

Michael Bublé’s jazzy take on the “Spider-Man Theme” was used in Spider-Man 2 and was one of my favorites to sing along with — often to my child’s chagrin. I may have even performed a drunken karaoke version at some point — much to the crowd’s chagrin.

Of all the songs on this list, this one holds the most memories from my childhood. While “Billie Jean” may have preceded it as the first number one from Thriller, “Beat It” was the song every kid in school was talking about, trying to decipher the lyrics, and playing the air guitar like there was no tomorrow. Who knew that 30 years later I’d be singing and dancing and air guitaring with my kid like there was no tomorrow?

Introducing your child to hip-hop is a tricky task. Lyrics are often far from kid-friendly, yet there’s no denying the ageless appeal of a sick beat and a killer hook. “Mama Said Knock You Out” and “Drop It Like It’s Hot” are two such tracks that have received heavy rotation at school pick-up. And luckily both have “clean” versions for young, rap-respecting ears.

I saved this one for last, though it’s certainly not the best. It is, however, the most personal. What started as a writing workshop exercise turned into an award-winning talent show performance that then became a professionally produced and recorded single.

.
While I cringe a little when it comes up on my song rotation, my son never seems to grow tired of hearing his dear old dad hamming it up. Earnest and corny and a little bit snarky, this country tune tells the tale of a little boy proud of his two dads. Turns out we’re pretty proud of him, too. 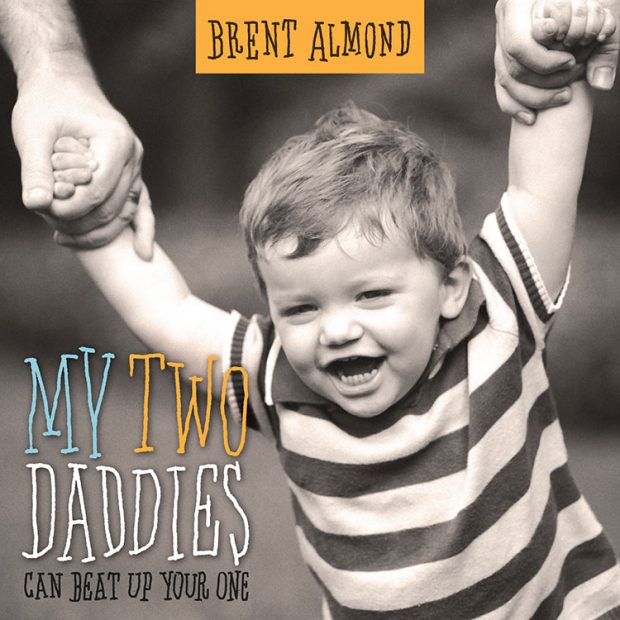 I told you it was impossible to list only ten! Here are ten more magical musical moments…
HERE COME THE ABCs / HERE COME THE 123s by They Might Be Giants
“LOVELY, LOVE MY FAMILY” by The Roots
“THE SHARK FIGHTER!” by The Aquabats
“THE TIME IS NOW” by John Cena (this song is trash, but represents the pinnacle of my kid’s wrestling-obsessed phase)
“RUMOUR HAS IT” by Adele (included for the memory of my then-two-year-old singing the chorus, “boomer has it”)
“EVERYTHING IS AWESOME!!!” (feat. The Lonely Island) by Tegan and Sara
any/every POWER RANGERS theme song
“THE NIGHT BEGINS TO SHINE” by B.E.R. (the ubiquitous prog rock anthem featured in several episodes of Teen Titans GO!)
SCHOOL OF ROCK SOUNDTRACK (we’re big fans of both the film and the stage show)
anything by RANDY RAINBOW (most aren’t very kid-friendly, but you can’t beat them for introducing your child to progressive politics and Broadway classics)

Check out my Spotify playlist of all these songs. And be sure to list any of your favorite musical parenting memories in the comments!