A few years ago, Jon went through a pretty intense wrestling phase. (Is there a non-intense wrestling phase?) His first favorite WWE star was John Cena — due in no small part to their shared name. It even got to the point where friends, teachers and coaches were calling him “Jon Cena”… at his request, of course. While I’m not a huge fan of the “sport,” I appreciated his passion, as well as the uniqueness of his costume amidst a sea of Avengers and wizards at that year’s Halloween parade. 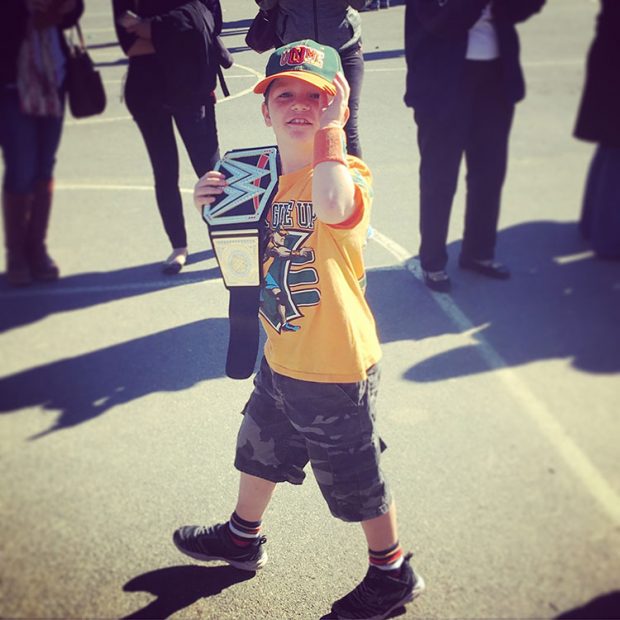 As with most things, the older my son has gotten, the more input he’s given on his Halloween costume. For his 10th Halloween, Jon changed his mind almost daily, eventually settling on a zombie hunter. The challenge for me was to find a zombie-killing weapon that wasn’t a machine gun or bloody axe. I found a cool crossbow that shot Nerf-type darts that was met with my young hunter’s approval. Note the post-apocalyptic background provided by our then under construction front porch!

WHERE TO BUY: crossbow • zombie hunter shirt/bandolier
HOW TO MAKE: Zombie S’mores! 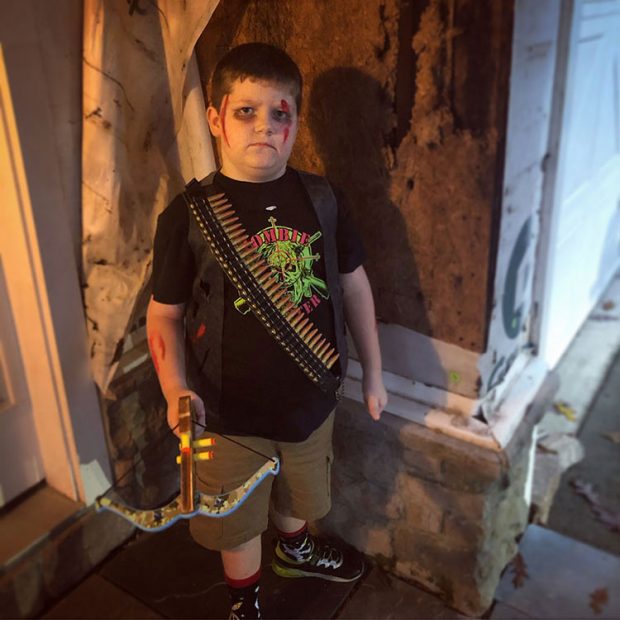 For Jon’s second Halloween, we did a family costume as Roy, Silo and Tango from And Tango Makes Three. This sweet picture book tells the true story of a pair of male penguins who raise an unwanted chick named Tango. It’s a staple in every gay dad’s library and made for some awwww-inspiring trick-or-treating.

While Jon’s penguin costume was store bought, Papa and I wore our own tuxedos. We accessorized them with red bowties and red-rimmed top hats to match our little “Tango.” 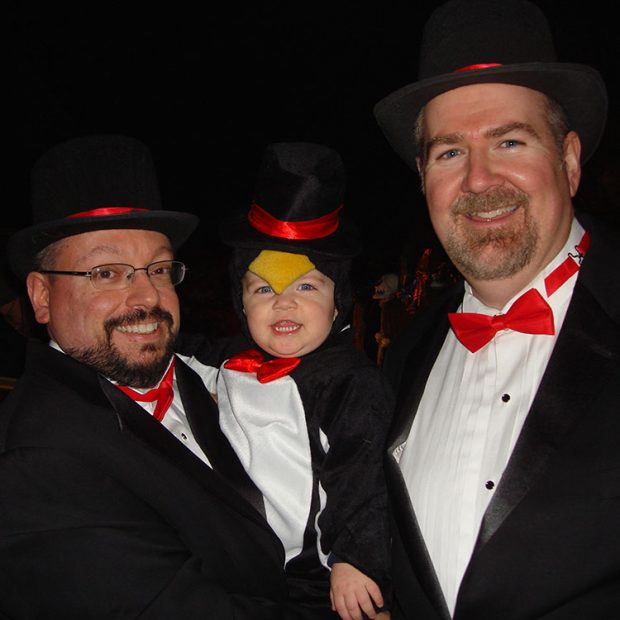 The first time I made this costume was for Papa, along with a Caesar salad costume for myself. We wore them to a Halloween party many years ago… for which we showed up a day early! So I was excited to recycle this tasty creation for a sponsored post for Amazon — about recycling boxes into costumes! Jon was a wonderfully willing model, for which was paid in, what else, pizza.

HOW TO MAKE: Includes instructions for this costume as well as a Caesar salad! 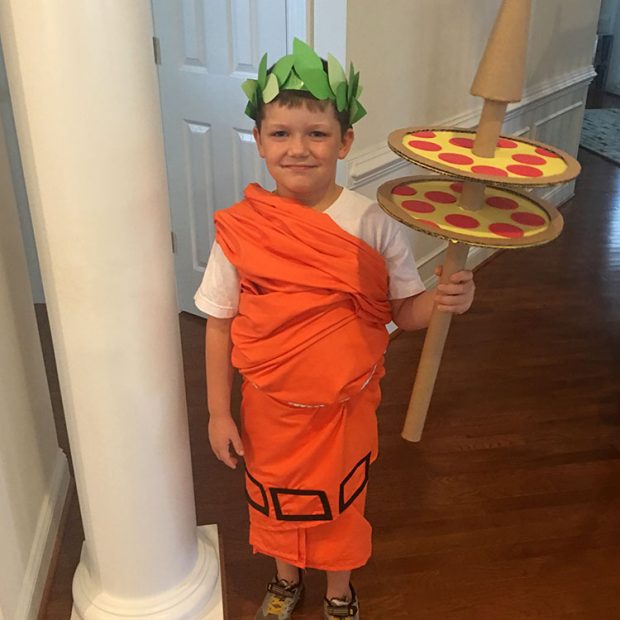 I grew up a huge Star Wars fan, and in 2015 was over-the-moon excited to introduce our kid to a brand new generation of films. Leading up to the release of The Force Awakens, we dressed up as the galaxy’s most infamous father-son pair. Papa and I of course added our own two-dad flair with some “Who’s Your Daddy?” tees that made us (and our energetic Luke) a big hit on the trick-or-treating trail. 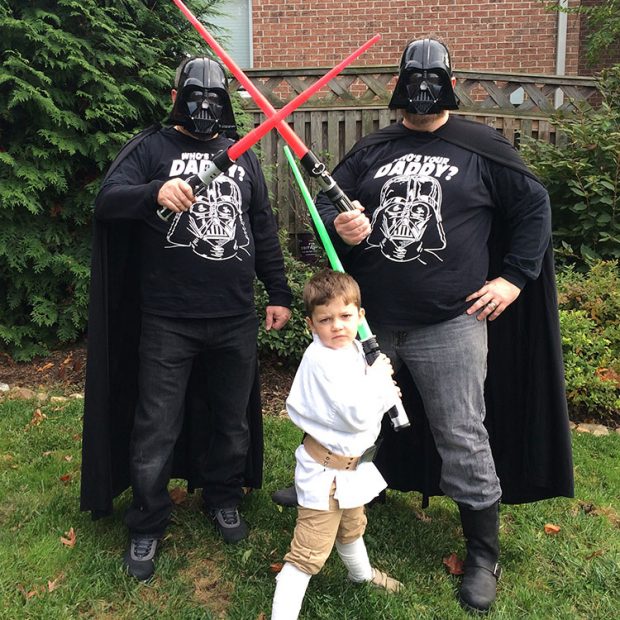 Who’s the greatest superhero of all time: Superman or Batman? The battle wages on, this time in a toddlerrific display of cuteness at ages two and three. Batman gets points for enthusiasm (and for inspiring this popular post), but Superman gets a slight edge with the help from his loyal sidekick, Krypto (AKA Cordi, the long-suffering Portuguese Water Dog) 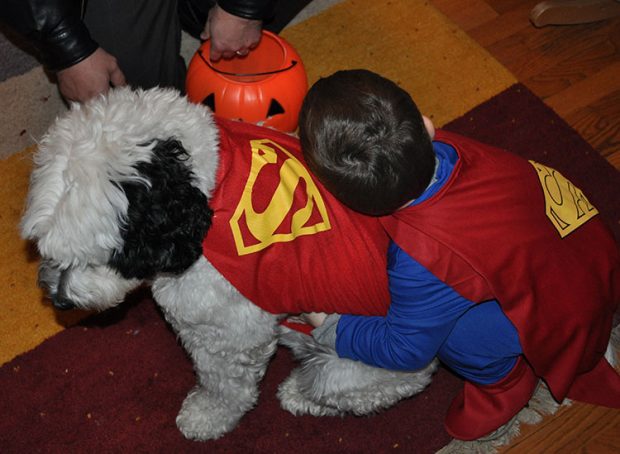 This one holds a beary dear place in my memories, as it was Jon’s first Halloween. As one half of a bear couple, I’d been planning this family costume long before our baby bear even came along. Unfortunately this was also the night Jon got one of his very first colds, but for a few moments we were the cutest Three Bears in the history of Halloween, if I do say so myself.

WHERE TO BUY: baby bear costume • bear ears & bowties • t-shirts designed by me, created at CustomInk.com 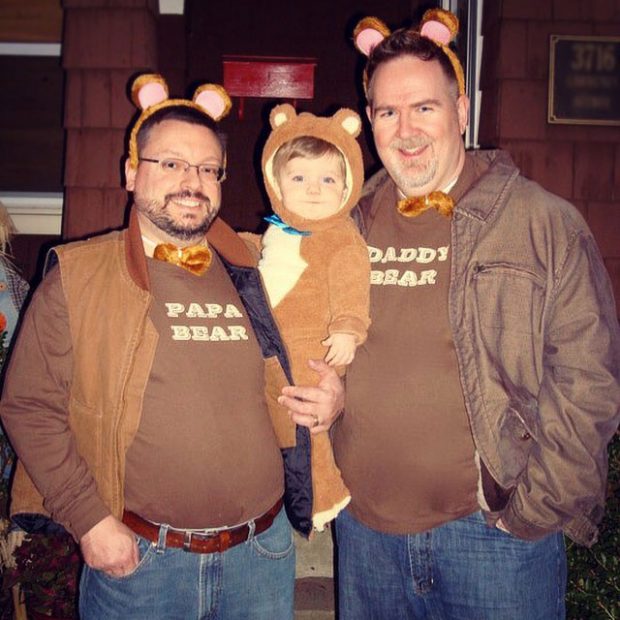 While the Three Bears wins for cutest family costume, our Spider-Man themed costumes were the most fun to make and wear. While Jon’s was store bought (he already owned the light-up Spidey sneakers), I had a blast putting together mine and Papa’s villainous personas. Pro tip: the hardware store is a great place for inspiration and supplies!

Papa’s Doctor Octopus get-up consisted of steam punk goggles, aluminum duct pipe, suspenders, duct tape and a cut up sweatshirt. My Rhino costume was created with one horn from a Viking helmet, a dog collar, industrial knee pads and a cut up hoodie. Check out more action shots here! 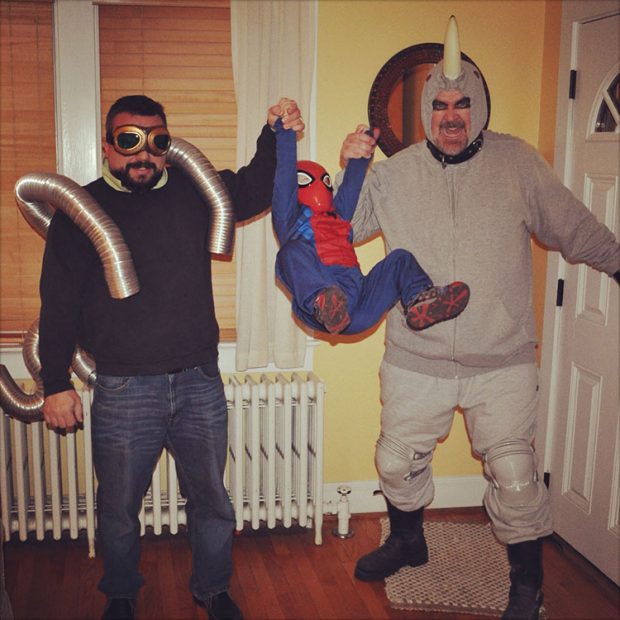 Once again, a trip to the hardware store provided inspiration for Jon’s Halloween costume. Happening upon some wood grain shelf paper sparked the idea to turn Jon into everyone’s favorite self-aware superhero, Groot!

I’m sure there was an easier way to make my son into a talking tree, but I had waited until the last minute and was running on caffeine and desperation. It lasted long enough to get some great pics but was quickly destroyed by the rigors of a pre-school Halloween party.

HOW TO MAKE: a step-by-step, twig-by-twig (with actual twigs!) tutorial 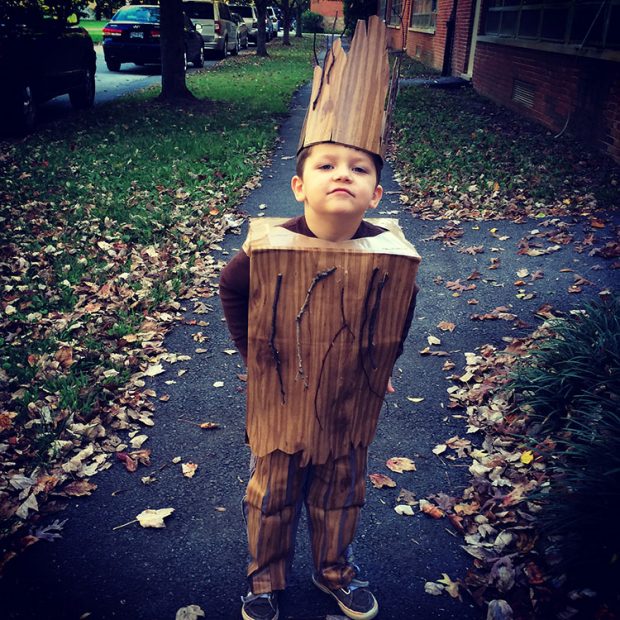 The top two spots on this list were from the same year. Hence 2014 was an insane Halloween of my own making. While Groot was fine for school, I knew it wouldn’t make it through an entire night of trick-or-treating — so I DIY’ed a second pop culture costume. The main reason it edges out Groot for my all-time favorite costume was because Jon had so much fun wearing it.

My kiddo went through a rather lengthy Ghostbusters phase, watching both original movies on repeat; requesting the theme song ad nauseam; even watching the god-awful cartoon. And for some reason, Egon was always his favorite.

I’m sure nowadays you can buy a full-on Ghostbusters costume, complete with proton pack and ghost-catcher. But back then I put my extra energy and crafty know-how to good use to make my kid the best buster on the block!

HOW TO MAKE: Proton pack was made from an old backpack, plastic tubing from an unknown toy, black foam paper, and various doodads from the hardware store and junk drawer. For reference, here are some additional photos.
WHERE TO BUY: Ghostbuster patches • Harry Potter glasses • neon light wire 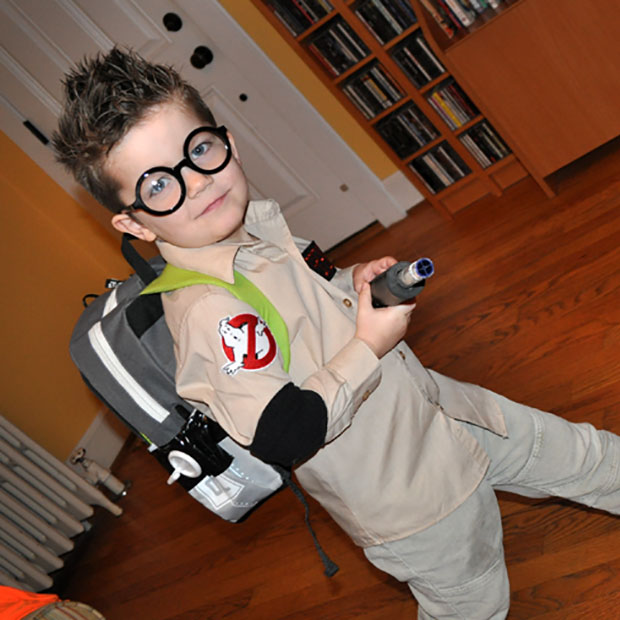 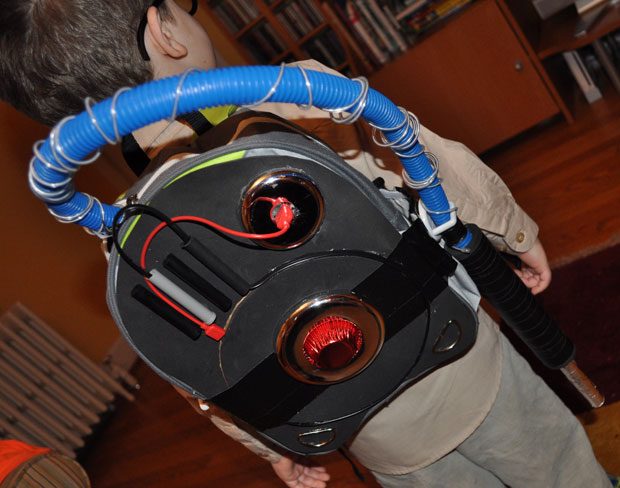 These 5 costumes didn’t make the Top 10 but were still cute, so they’re getting a shoutout.

DISCLOSURE: This post contains affiliate links — meaning, at no additional cost to you, I will earn a small commission if you click through and purchase one of the costume items.