This list is roughly arranged so that my fondest Father’s Day memories are at the end, so this one was pretty clearly going to be first. Jon was well into his terrible twos, so for some reason we decided we’d spend Father’s Day at the apartment of a single, childless friend. Our energetic toddler was the proverbial bull in a china shop… if the china shop was full of glass coffee tables, breakable knick-knacks and several frightened cats. The only thing that entertained Jon (that didn’t involve sharp edges or terrorizing animals) was repeatedly/endlessly/annoyingly opening and closing the balcony screen door.

The photo was taken on said balcony moments before our little guy melted down and sent us packing. At least we look cute (if not a little insane). 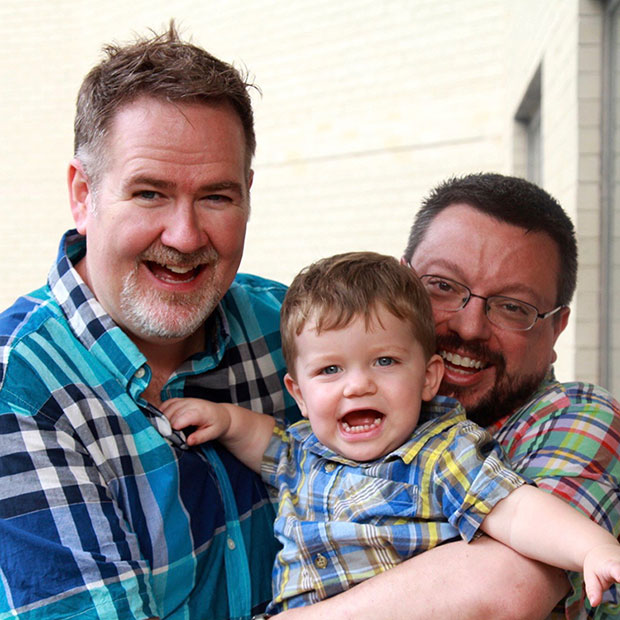 When I was scrolling through looking for photos from our very first Father’s Day, I was coming up empty. No cute family shot, no sweet smiles or matching outfits — what gives? Then I remembered Jon was a mere seven months old and we were across the country visiting his birth parents in Oregon. Between feeding him in random parks and napping in random beds, it’s a wonder we got any photos at all. Like I said, not a day of rest and relaxation. At all.

I know now — because of math — that this year was our 11th Father’s Day. But it was also our first Father’s Day spent in quarantine. While I’m beyond grateful that we were together and healthy, I’d prefer no more holidays confined to our home due to a global pandemic, thankyouverymuch. 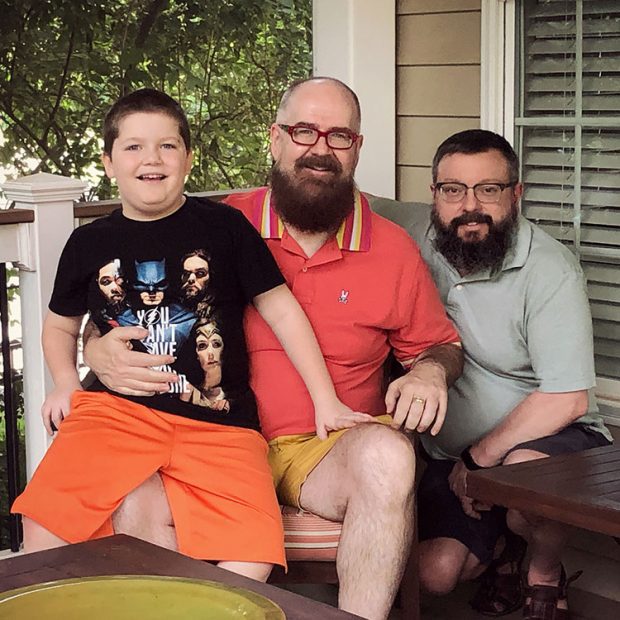 I’m pretty sure whoever invented Father’s Day put it smack in the middle of baseball season on purpose. While the day was beyond sweltering, it was extra special having my boys there to cheer me on as I sang the National Anthem with the Gay Men’s Chorus of Washington. GO NATS! GO DADS! 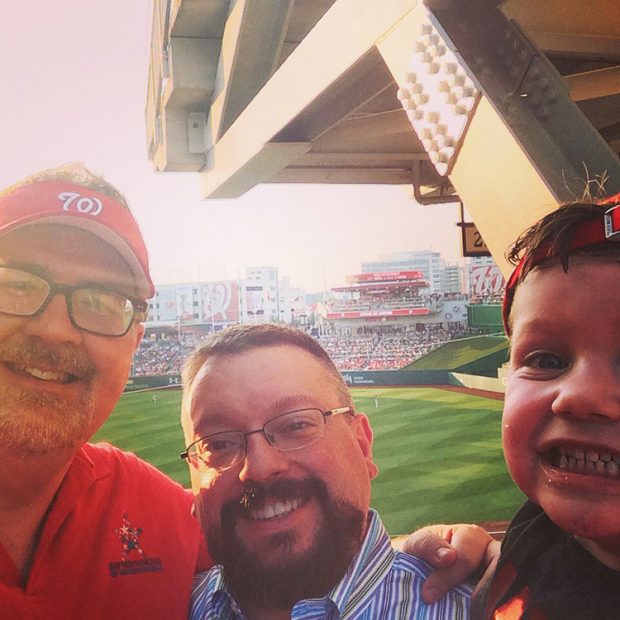 Sometimes the best days are spent just laying around all day in matching socks. Sometimes those days are also Father’s Day. 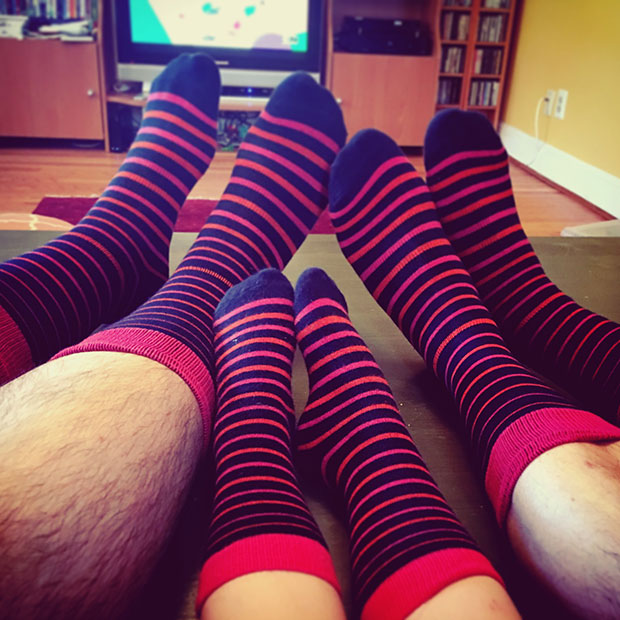 While we typically spend Father’s Day as just our family of three, there have been a few times we’ve visited my parents. I’m grateful for any time Jon gets to spend with his grandparents… and for the naps I get to take. Honorary award for 2019 and our matchiest outfits, courtesy of JCRT.

Speaking of grandparents, living relatively close means that not only does Jon get to hang with his Grandpa, but I get to hang with my Dad. It’s always great to be reminded how much I need to learn as a parent. And how thankful I am for the father I have. 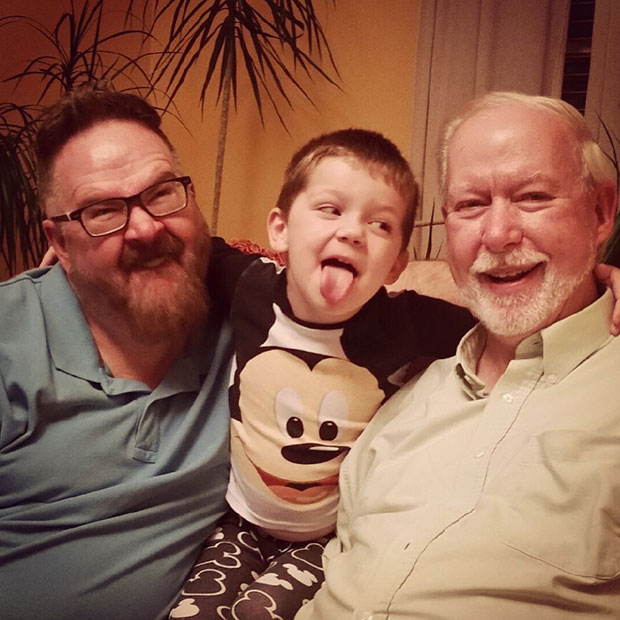 A few years ago we had an especially cool Father’s Day with a family trip to Awesome Con (DC’s version of Comic Con). Between finding some cool Star Wars throw pillows, playing a roomful of video games and signing a tribute wall to the recently departed Adam West, we were three very happy, geeked-out dudes. 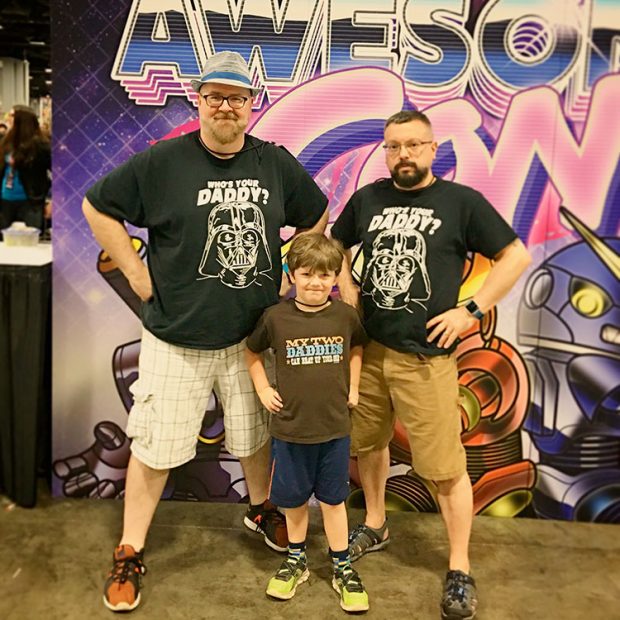 Just like laying around in matching socks, some of the best days involve doing something easy and fun. When Jon was younger, many summer weekends (and this particular Father’s Day) were spent at a local park. Scootering up and down the paths, riding the carousel and of course ice cream sandwiches made each of those days perfectly simple. And simply perfect. 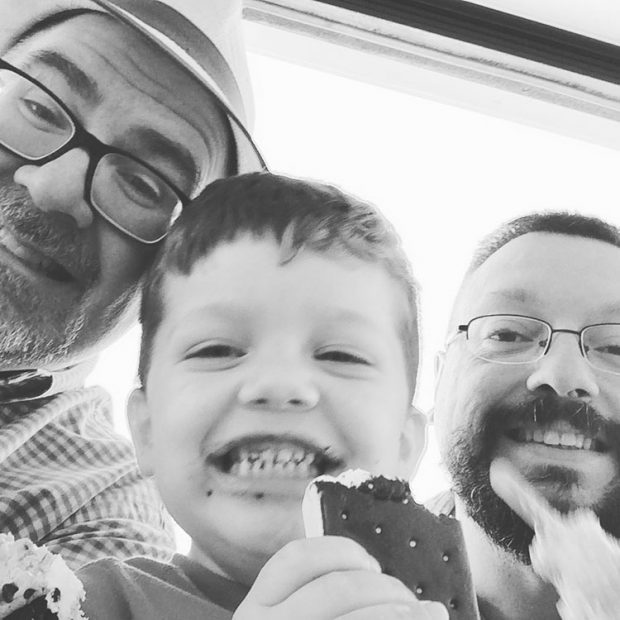 My birthday is June 12, and falls between my two favorite holidays — Father’s Day and LGBTQ Pride. A couple of years ago we combined all three with a trip to the Capital Pride street festival. We found a water slide for Jon, ate greasy food on a stick, and generally enjoyed being a family amongst our community.

Nothing makes me more proud than openly celebrating my love and my family, my fatherhood and my queerness — all in one place with with the people I love the most. 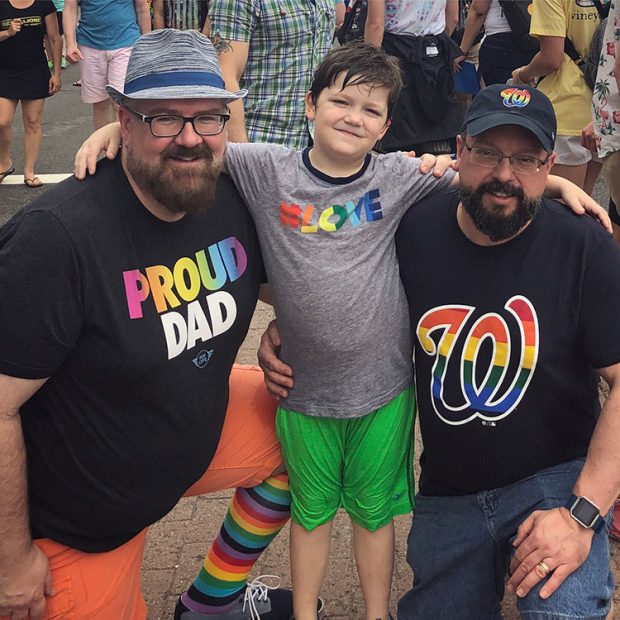 What is your family’s favorite holiday? Do you recall one in particular that brings back the fondest memories? Take some time during quarantine to reminisce, and let those you love know how much you mean to them.