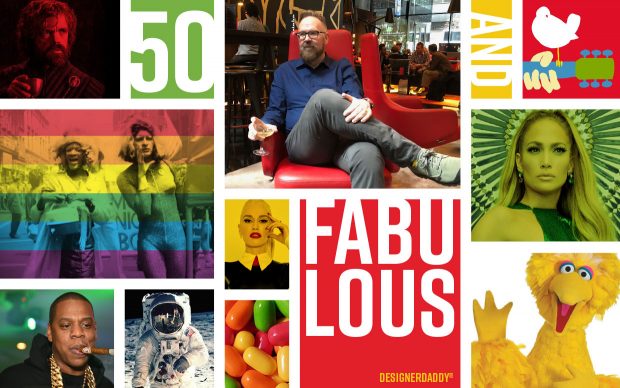 .
The list of things, events and people hitting the half-century mark this year is staggeringly impressive — but not in a commemorative “remember when they were cool” kind of way. Five decades in, and they’re still making an impact, affecting change, and knocking our socks off.

For example… Sesame Street continues to gently teach children us all to understand and include everyone, regardless of gender, race, disability, or fur color. • In the spirit of the original “Peace, Love & Music” festival, Woodstock 50 boasts a lineup of talented, activist artists partnering with charities dedicated to the environment, gun violence, and vulnerable youth populations. • The Stonewall Riots kicked off the modern LGBTQ rights movement — which is still going strong, and still very much needed.

Famous folks turning 50: J Lo just got engaged to A-Rod, and hosts nearly every reality show competition. • Gwen Stefani hosts the rest of them. • Jay-Z gets to stay married to Beyoncé. • Peter Dinklage is an Emmy and Golden Globe-winning star on the most epic TV show of all time, which is gearing up for its final, most epic season of all time. • Paul Rudd is a freaking Avenger.

A few honorable mentions go to the Moon Landing (let’s see how this Space Force stuff plays out), The Internet, Very Hungry Caterpillar, and Tic-Tacs.

.
And like J Lo, Big Bird, and every drag queen, I plan on having a FABULOUS year. But I haven’t always felt this way about turning 50.

This time a decade ago I had lost a little weight, joined the Gay Men’s Chorus of Washington, vacationed in the Caribbean, and threw a huge blowout for my 40th. Then a few months later reality crashed hard on my thinning, graying head when I became a dad.

Don’t get me wrong… I was beyond proud to be a father. It had been a long journey for Papa and me to get approved for and then matched with our adopted baby boy. And I was proud to be a gay dad, still somewhat of a rarity at the time. It was a thrill being a trailblazer of sorts, and added to the adventure and “fuck the haters” of it all.

But as any parent knows, raising a child takes its toll. As a new father I’d never felt younger, while simultaneously having never felt older. I relived my own childhood while introducing my kid to art and music and Star Wars and superheroes. But the middle-of-the-night feedings and continual state of High Alert wore me down, both physically and emotionally.

I’ll spare you the degenerative details of the last ten years, but as I crept up on 50, I took some much-needed steps to disrupt the aging process. This meant not only taking care of my body, but nurturing my mind and soul as well. 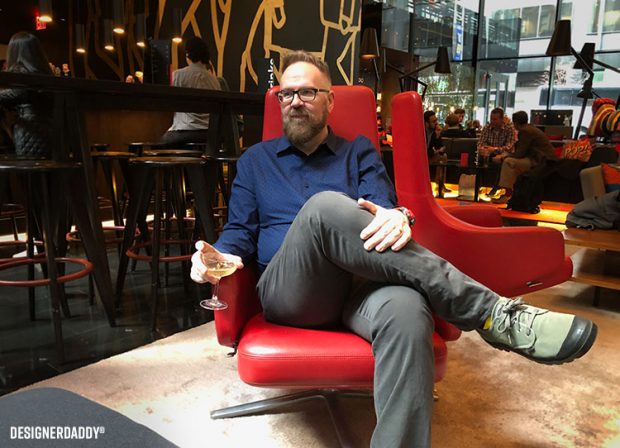 I started dyeing my beard. Initially, I rationalized doing this because I didn’t want my son’s earliest memories of me to be confused with Santa… or worse, Grandpa. This may seem silly and shallow to some, but little things like covering my gray have been helpful in how I see and hold myself as both a man and a father.

I saw a therapist. The stress of the adoption process as well as coming to terms with my shortcomings as a father led me down some dark, twisty paths. Finding someone to help me navigate the journey in a deliberate, healthy way has made all the difference.

I put myself out there. Being a stay-at-home parent / primary caregiver can be lonely and isolating. So I started a blog and connected with a community of like-minded parents. I volunteered my time and talents to help make my world (and the world) a better, kinder place. I have 50 years of fabulousness to share, but it’s up to me to share it.

I had gastric sleeve surgery. Fun fact: losing weight gets harder the older you get. As I entered my late forties, I struggled with a painful back and arthritic knees. I was lethargic and depressed; a disengaged father, husband and friend. I was teetering on the edge of high blood pressure, high cholesterol, and diabetes… but I was resolved not to topple onto the other side. So I made a choice to help change the course my life was headed. I’m just six months out, am down 80+ pounds, and it’s one of the best, most important decisions I’ve ever made.

Every parent says they want to be around longer for their kids. Yet I didn’t make these decisions and take these steps just so I can live longer; I did them because I want to live better.

I partnered with Disrupt Aging from AARP for this post, however all words and opinions are my own.