1. HE CAN TALK TO THE ANIMALS

As a child, I didn’t enjoy sports or horseplay with my brothers. I wasn’t a fan of toy guns or cars or anything very loud or mechanical. My favorite activities were watching cartoons and drawing — neither of which involved going outside or contact with other kids. Both of which frequently involved my pal Aquaman. 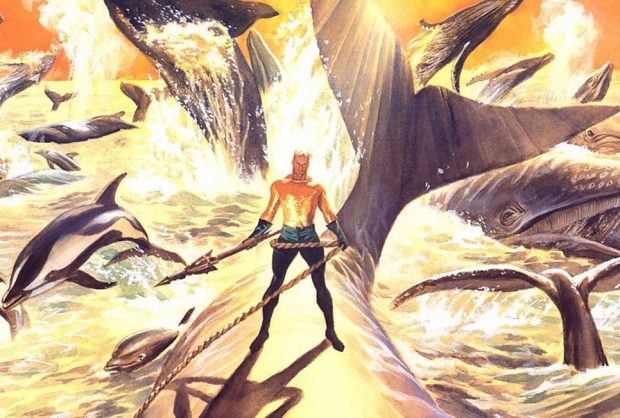 While most superheroes performed their heroic duties by punching, blowing up, or bataranging their enemies, Aquaman employed the help of his fishy friends. Many view this as silly or weak, but I was drawn to his non-confrontational approach. Aquaman commanded the fish, but never to their detriment. He was a just and compassionate ruler — both to his fellow Atlanteans and the creatures of the sea.

Sure, seeing him ride a seahorse or waterski on flying fish is a little goofy. Yet that was much more relatable to this gentle-spirited kid than zooming around in a souped-up car, racing locomotives, or even cruising in a transparent jet.

Aquaman’s relationship with fish and other aquatic animals showed me that heroes (men, in particular) can be kind and understanding while still being brave, strong and powerful.

Aquaman is once more the odd man out when it comes to his color scheme. While nearly all of the big names are decked out in red or blue, the King of the Seas sports an orange and green uniform. Even though these secondary colors aren’t seen as bold or strong, I was drawn to the costume’s originality. 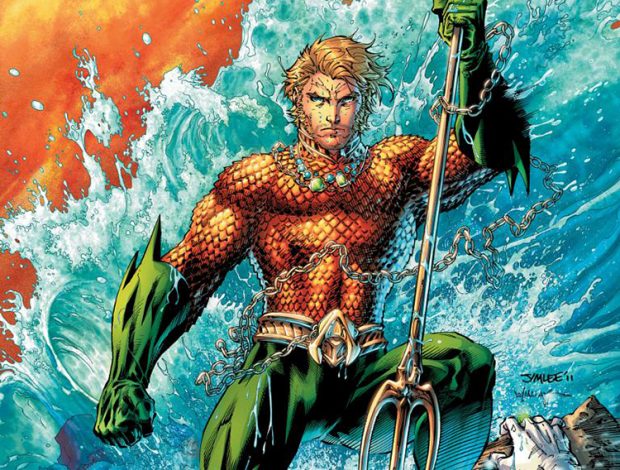 And then there’s his blondness, when most other well-known heroes have black or brown hair. There are other tow-headed heroes, but their hair is typically covered by masks (Captain America), helmets (Thor), hats (Green Arrow), or fire (Human Torch). Whereas being blond may not seem like a handicap, in fictional male characters it often carries connotations of weakness and femininity — again, something I could relate to as kid on the sensitive side.

It’s the fact that Aquaman’s look isn’t typical that attracts me to him. I appreciate that he has moments of weakness. I admire that he doesn’t just go along with the other dudes and throw on a red cape or blue mask. His uniqueness and outsider status spoke to me, both as a graphic designer and a closeted youngster.

3. BEST SUPERHERO IN A SUPPORTING ROLE

I’ve always been attracted to supporting characters — ones that are part of the gang, but rarely (if ever) get the limelight. Think Schroeder; Chewbacca; Lisa Simpson; Joey Fatone. I root for them as if I were rooting for myself.

Aquaman was a founding member of the Justice League and had his own animated series in the late sixties, but his first, best-known pop culture appearance was as part of the Super Friends. The Saturday-morning cartoon’s lineup included superherodom’s triumvirate, yet Aquaman was included right along with them as one of “the world’s four greatest heroes!”

His second-tier-yet-vital status has continued throughout each iteration and medium, whether as a member of DC Comics’ “big seven,” a scene-stealing guest star on Smallville or Batman: Brave and the Bold, or getting under Batman’s skin in Justice League.

4. RIDING SHOTGUN WITH A PRINCESS

An added bonus of being second-string is that when Superman and Batman are off doing important, leadershippy stuff, Aquaman gets to hang with Wonder Woman. 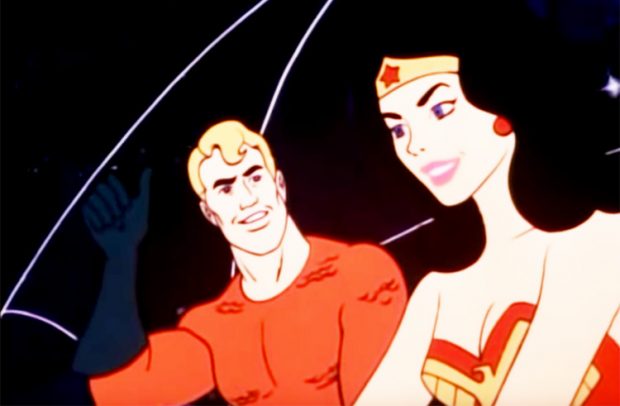 Perhaps if I’d grown up in more progressive times I would have declared my adoration of Wonder Woman freely. Instead I enjoyed being her BFF vicariously through Aquaman.

Most know Batman lost his parents, Spider-Man lost his uncle, and Superman lost his entire planet. Yet few realize how much sorrow and suffering Aquaman has had to endure.

The short list includes the murder of his young son; loss of his hand to evil piranhas (ironically replaced by a harpoon); wife Mera leaving him on several occasions. He’s died at least three times in various comics, and I can’t even count how often he’s been crowned king of Atlantis only to then be betrayed, dethroned or banished.

Duality is a common theme for the likes of Superman, Batman and Hulk, yet no one rides the waves betwixt two worlds like Aquaman. The conflict between his human and Atlantean sides — and his roles as team member and king — are central to his character, and are present in nearly every one of his storylines, including his solo film debut.

You’d think a lifelong Aquaman fan would be into scuba diving or study oceanography or have their entire house decorated in fish motifs. Not the case.

However, I very recently (as in, while writing this) realized my attraction to the sea exists on a cosmic (and also romantic) level. My first serious boyfriend was a Pisces. My second — now my husband, 20+ years together and going strong — is an Aquarius. No other fish in the sea for me!

You can’t swing a dead catfish without finding an Aquaman joke in pop culture. South Park, Family Guy, Robot Chicken, Big Bang Theory, Spongebob, Entourage, Teen Titans, Go!, an endless sea of memes, and pretty much every talk show host ever — they’ve all reduced Aquaman to so much chum with wave after wave of talking-to-fish jokes. Hell, sometimes even I can’t resist. 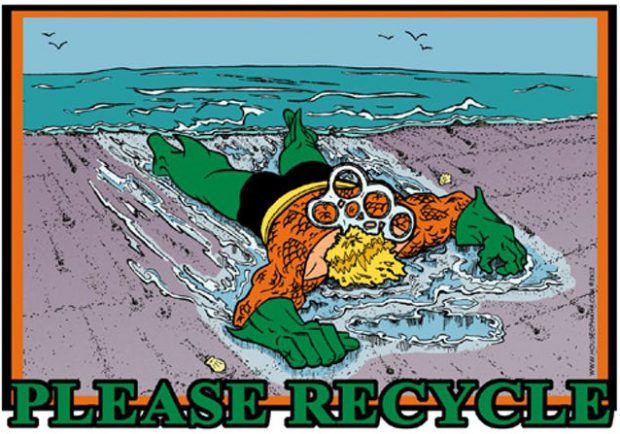 Nevertheless, most of what Aquaman is mocked for is what makes him my main man. I admire the fact that he works with sea creatures to defeat evil. I dig his out-of-the-ordinary duds. Anyone can fawn over Batman, Spider-Man or Wolverine — it takes originality, intelligence and bravery to be a fan of my guy.

I’d like to think my love of Aquaman helped me be the advocate that I am. Being a long-suffering fan of an oft-mocked character takes patience, compassion and loyalty. It takes sticking up for the unpopular and the overlooked. 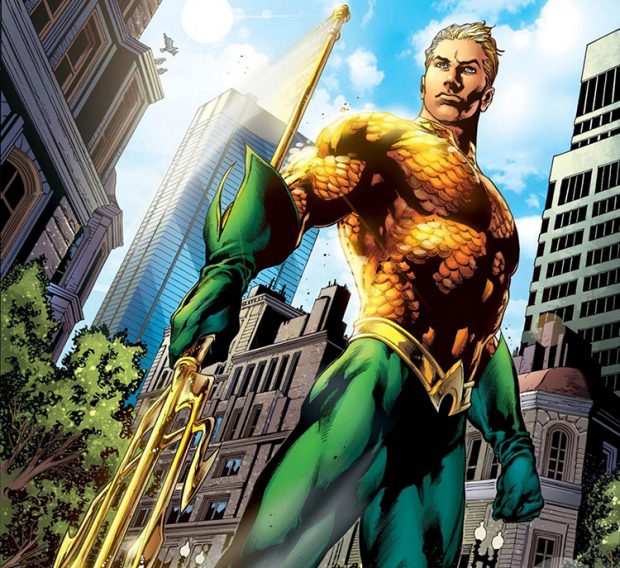 Thank you, Aquaman for being the best hero a sensitive boy, closeted young man, proud father and lifelong comic book fan could have. Also, you could totally kick Batman’s ass.

EPILOGUE: What About Jason Momoa?

I’ll talk more about him in my review of the film. For now let’s just say Aquaman is a delicious sundae I’ve been enjoying my whole life. Momoa is the big, beefy cherry on top. 😉 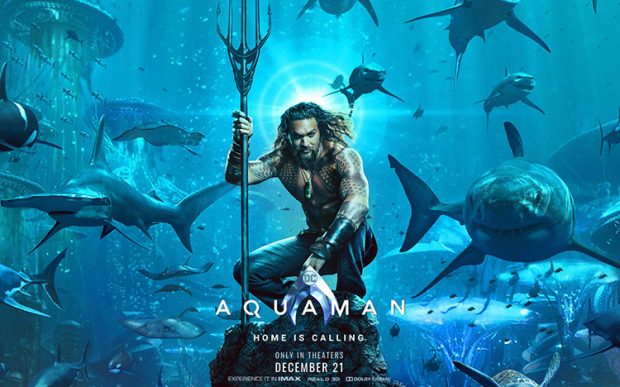 A special shout-out to the now-shuttered Aquaman Shrine and its author, Rob Kelly. This was the first blog I read regularly, and one of the inspirations to start my own. You can still get all the latest Aqua-news by following @AquamanShrine on Twitter.

Did you catch all the water/fish puns? Leave a comment with your count!

Never miss a parenting, political or pop culture moment — subscribe to Designer Daddy at the top of this page, and be sure to like Designer Daddy on Facebook!