I went into fatherhood with a lot of insecurities. A lifetime of internalized homophobia and the unknowns of open adoption were at the forefront. But I also questioned how I could be a strong, manly example to my son without any knowledge of or interest in sports, car maintenance, or the great outdoors.

The answer to the latter was superheroes. I knew them, I loved them, I could draw the hell out of them. I was ready to rock my niche and be the best comics nerd dad around. And I was going to equip my kiddo with an education of both comics universes, so that he could be the coolest, most superhero-savvy kid around.

As in my own childhood, I began my son’s superhero training through the small screen. Cable TV offered an endless supply of comics inspired cartoons. Netflix provided a non-stop stream of source material, both classic and new. My kid had the added benefit of growing up with mobile devices, where YouTube allowed us to binge on “Spidey Super Stories” — the same ones I’d grown up watching on The Electric Company.

The next logical step was play-acting, which was especially fun at Halloween. After a couple years of adorable anthropomorphic costumes, we ventured into superheroes. Two standouts were the year we went as a family of Spider-Man characters, followed the next by Jon rocking a homemade Groot costume.

In addition to dressing up for candy, on rare occasions we got to dress up for money. One of my favorite sponsored posts saw our entire family (dog included) decked out in Marvel gear to promote their #WhoIsYourHero campaign. And yup, all four of the characters were Stan Lee creations. 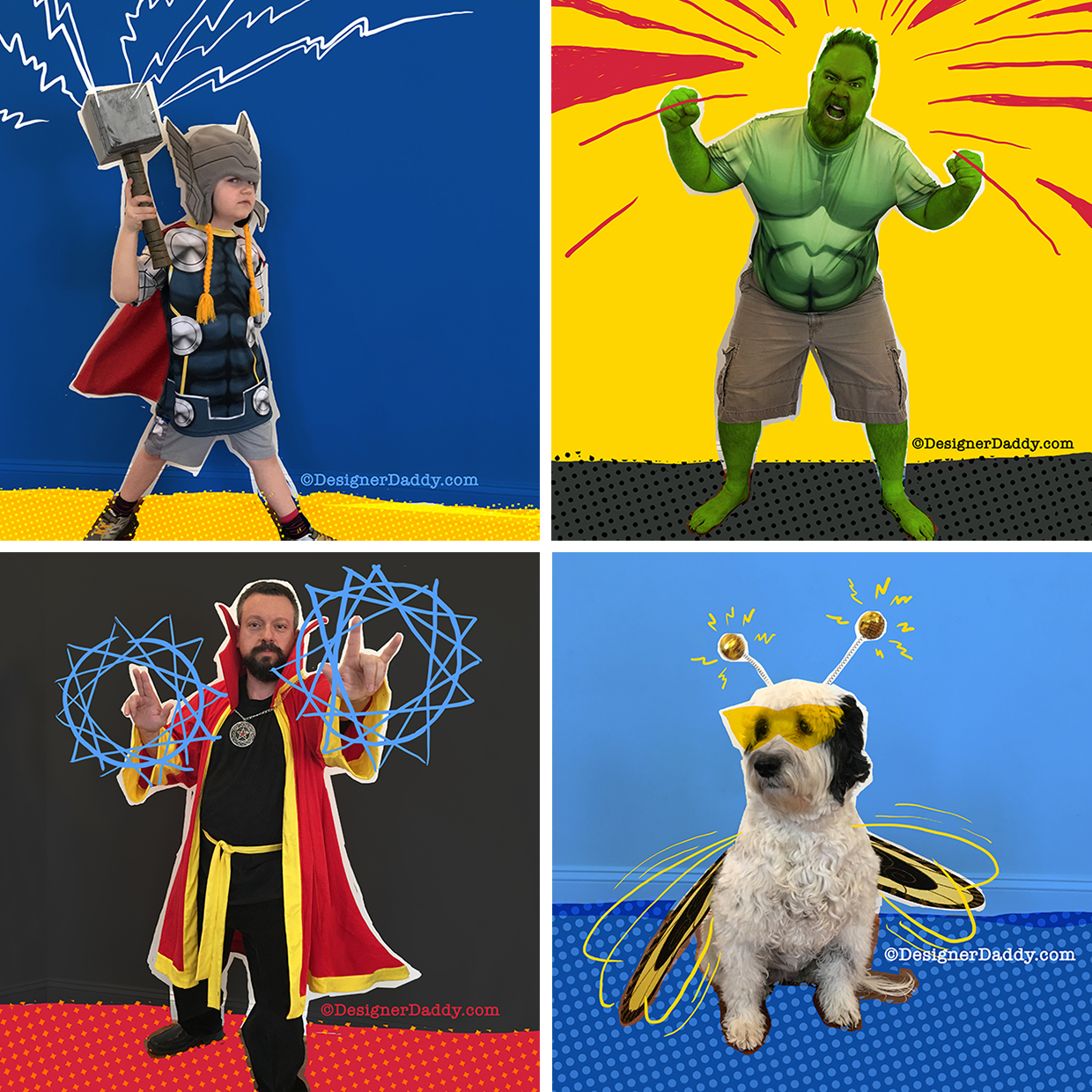 Jon as Thor, Me as Hulk, Cordi as The Wasp, Papa as Doctor Strange

COMICS AND MOVIES AND MERCH, OH MY!

As Jon got older, I started introducing him to actual comic books. Marvel series like Squirrel Girl, Ms. Marvel, Spider-Man and The Runaways are frequent visitors during our nightly bedtime reading.

The most epic form of bonding has been the Marvel Cinematic Universe. I still recall from my own childhood how mind-blowing it was to see Superman and Batman on the big screen for the first time; the last ten years with Marvel films has been a non-stop thrill ride of the same. And to share these experiences with your kid? Living vicariously through his reactions is like another level of special effects!

With the onslaught of Marvel films came the inevitable onslaught of related merchandising. Action figures, LEGO sets, posters, clothing, school supplies, video games and more (much more) can be found in pretty much every inch of our house.

Blockbusters and mountains of merch aside, the place that’s fostered the most bonding and my best Marvel education has been in the creation of my son’s lunch notes. Upon a (not very) quick review, 43 characters created by Stan Lee have made an appearance in my son’s lunchbox. Many of them multiple times. My anal retentive/OCD side would love to show them all to you, but the sheer numbers would crash my blog… and test the patience of mere mortals. But here are (more than) a few of my and Jon’s favorites from the past four and-a-half years of lunchbox doodles: 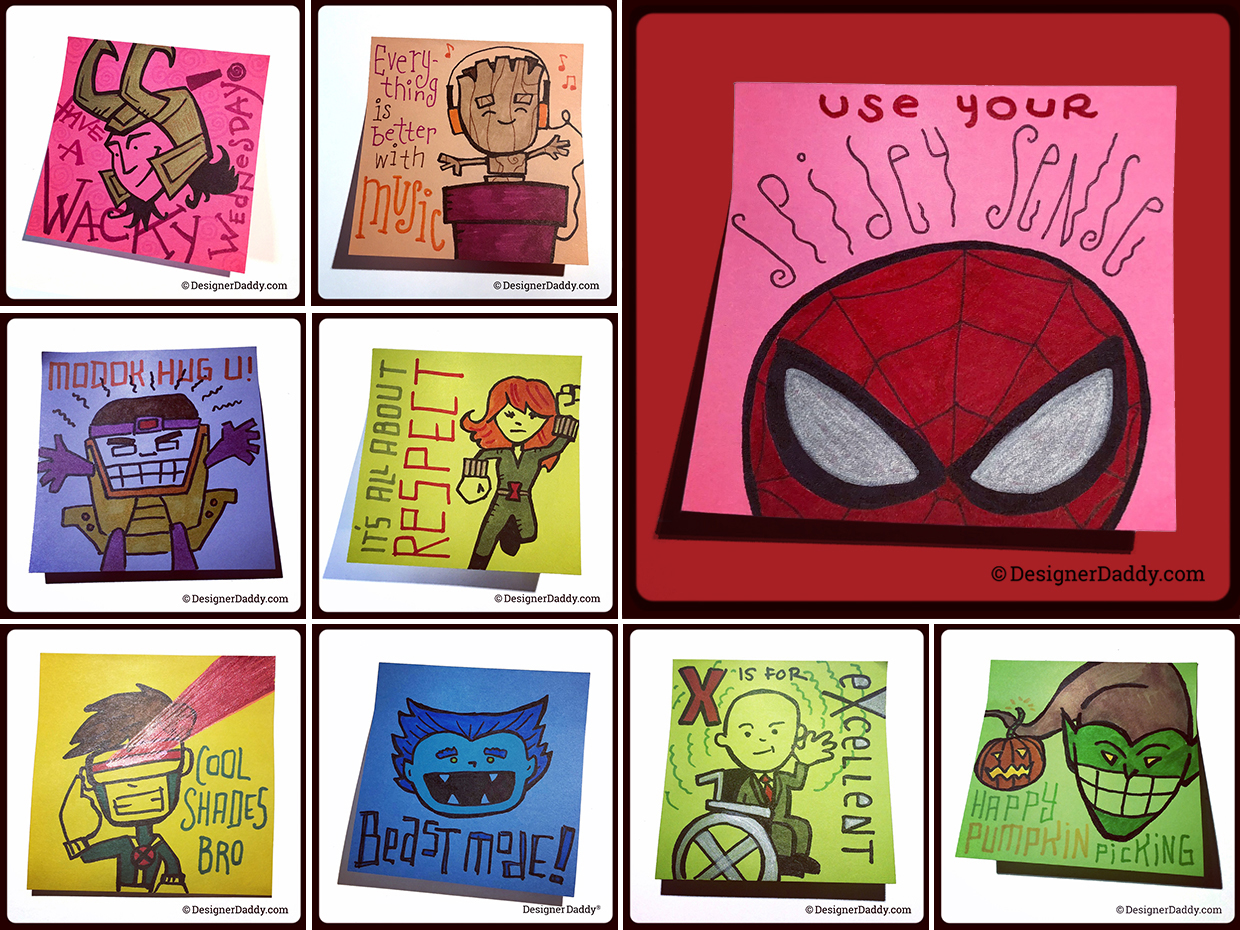 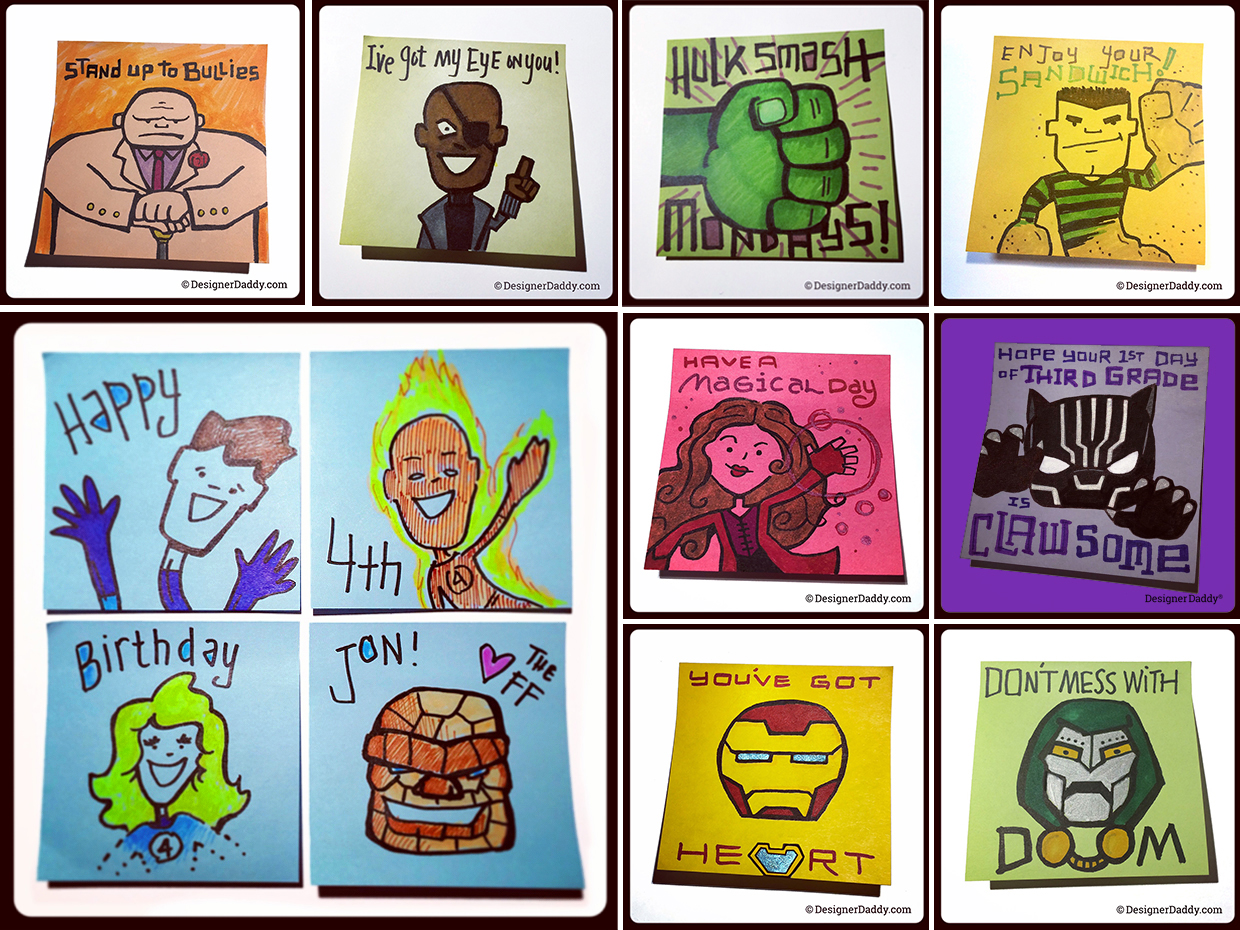 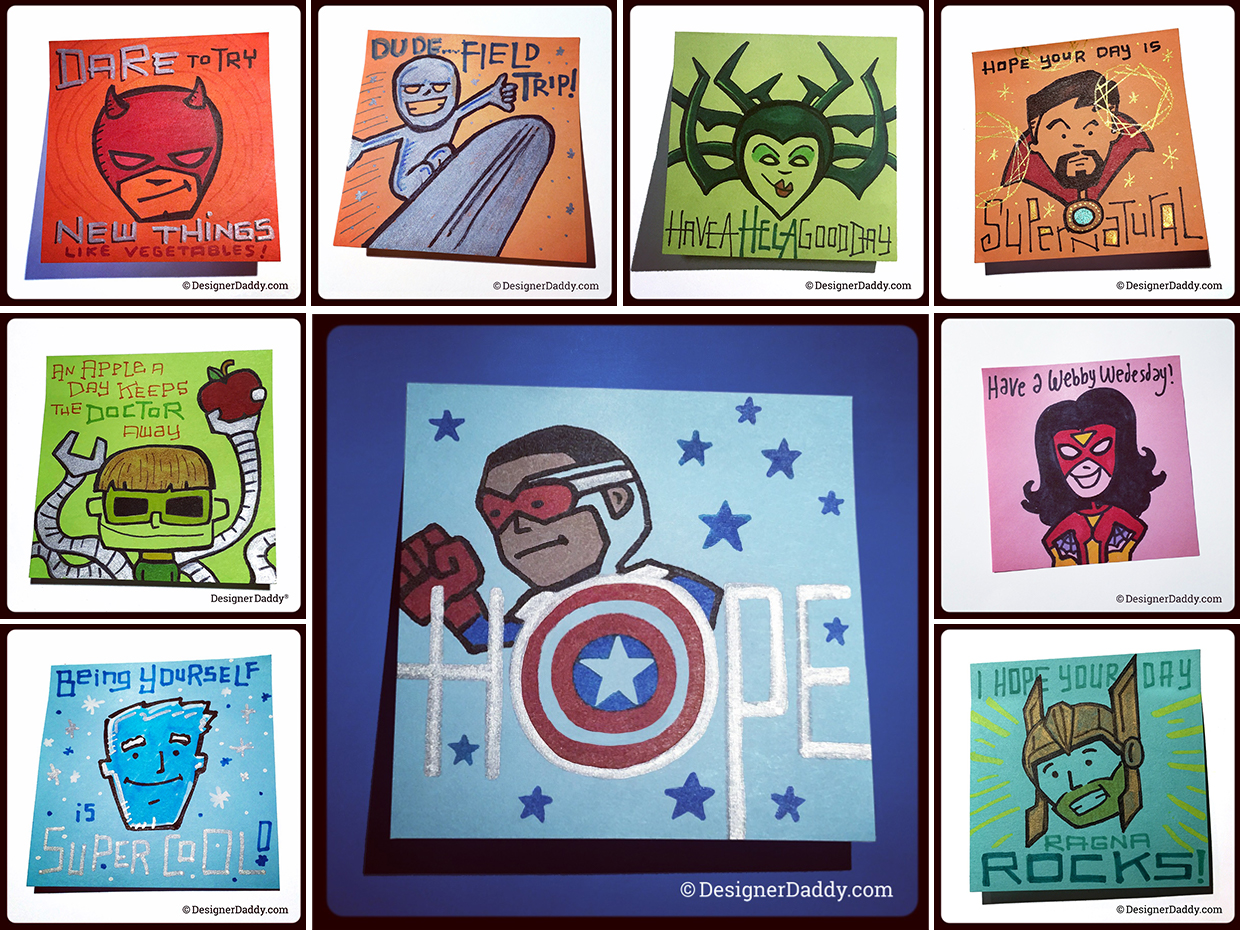 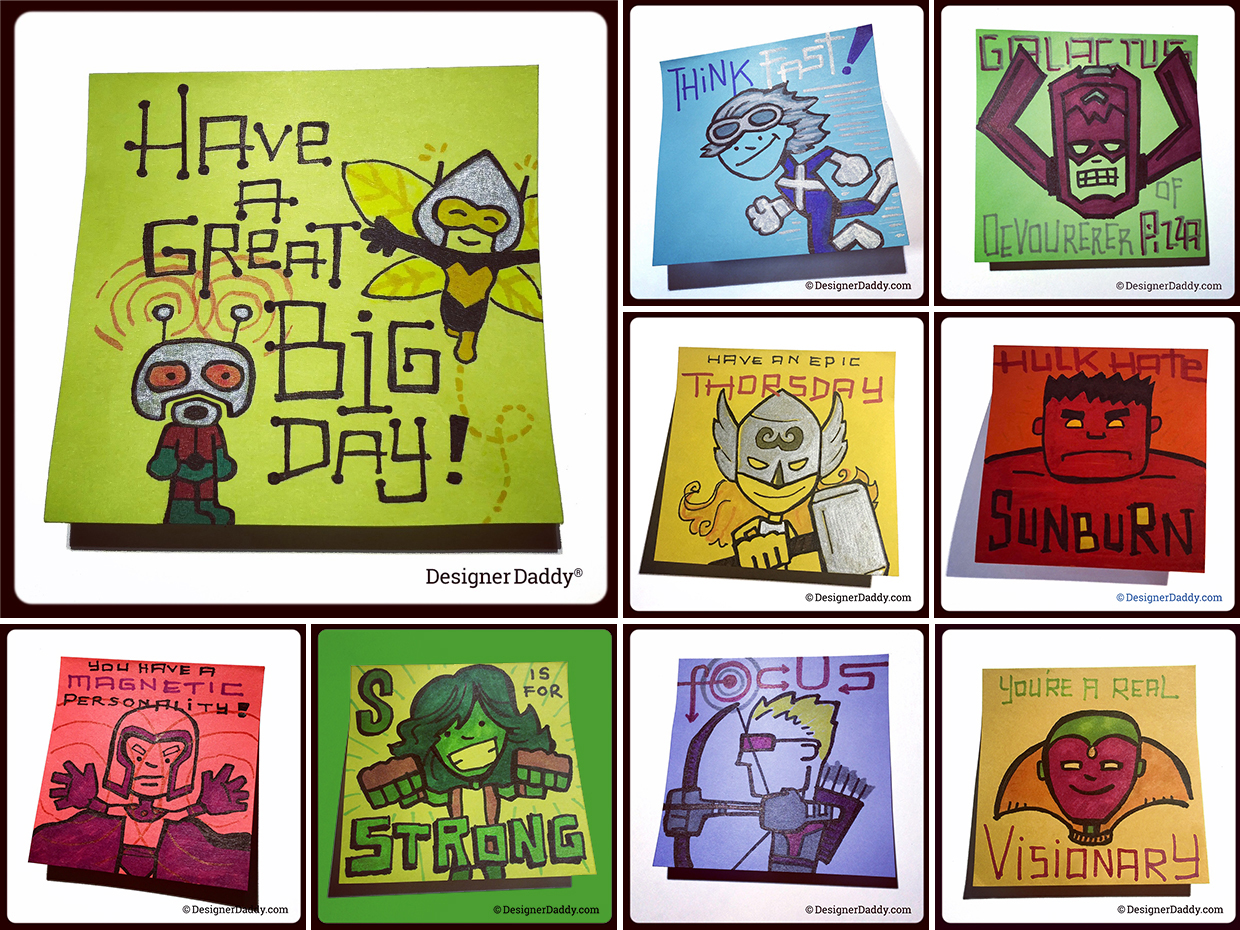 But here’s the thing about these characters Stan Lee wrought — I wasn’t just teaching my son about these fantastically heroic (or villainous) super beings. I was also teaching him about racism, girl power, homophobia, teamwork, forgiveness, and responsibility. Their humanity (or mutantity?) is a large part of what makes Spider-Man, Hulk, The Fantastic Four, Magneto and all the others so popular — but it’s also what makes them inspiring works of art.

Against all odds and the laws of the galaxy, in the process of schooling my son in superheroes, I found myself becoming a dual comics fan. In addition to the lunch notes, movies, and bedtime comics with my son, I’ve had a blast discovering the full expanse of the Marvel universe and Lee’s creative genius on my own — it’s been almost like a second childhood! Dozens of Marvel characters, books, and storylines now rank among my all-time favorites. I may have been a DC kid, but along the way I also became a Marvel dad.

So thank you, Stan Lee, from my family and me. Thank you for all of the thrills, laughter, heroics, and out-of-this-world imaginativeness we’ve experienced from your creations. Wherever you are (Valhalla, hangin with the Watchers, swirling around the ethos with all of those snapped into oblivion by Thanos), know that your characters — and your character — will live on in the next generation and into infinity.

Note: While Lee was the face of Marvel Comics, he by no means worked alone. Every character attributed to him was a collaborative process, alongside creatives like Jack Kirby, Steve Ditko, John Romita, and many, many others.

2 responses to “Stan Lee Made a True Believer of Me”