For several years now, Cartoon Network’s Teen Titans GO! has been the go-to show for me and Jon to watch together. The combination of slapstick humor and superhero shenanigans are the perfect recipe for some nerdy, father-son TV bonding.

While we were obviously pumped for the Titans’ cinematic debut, I didn’t expect anything beyond a feature-length version of the show. I was pleasantly, hilariously surprised.

The film dishes out show staples (the aforementioned fart jokes, booty-shaking, riffs on Robin’s tiny hands), yet does so sparingly, to make room for a story that’s equal parts clever, exciting, and really, really funny.

Where the series tends to incessantly mock the Titans themselves, the film takes on the entire superhero genre. And when I say entire, I mean A-listers to D-listers; both DC and Marvel. But it doesn’t stop there. Teen Titans GO! to the Movies lampoons other Warner Brothers properties, inspirational 80s pop, revered Disney classics, DC’s bleak cinematic track record, and the entire film industry itself.

Between kids giggling at the rapid-fire silliness and adults guffawing at the endless pop culture references, the laughter literally never stops. TIP: If you have to pee, try and hold it through the time travel sequence.

What about the haters?

I’m not talking about parents whose tastes don’t skew quite young (or loud) enough for Teen Titans GO! I’m referring to the diehard comic nerds. The ones who adored the original, less slapsticky show. The ones who claim the current iteration is blasphemy and the cause of all suffering in the world.

To them I issue a challenge: If you let yourself, you’ll get a kick out of TTGTTM. Put aside your criticism and enjoy what iO9 calls “…a PG, animated Deadpool.” I’ll bet you a mountain of waffles you’ll be too busy hunting for Easter eggs and smugly laughing at obscure comic book references to hate. And be sure to stay for the mid-credits button.

• Great soundtrack highlighted by several insanely catchy songs
• Awesome voice talent: keep an ear out for Kristen Bell, Will Arnett, Nicolas Cage, and a certain swarthy 80s crooner.
• Superpowered action sequences, which are kind of rare on the TV show
• Important life lessons (also in short supply on the show) 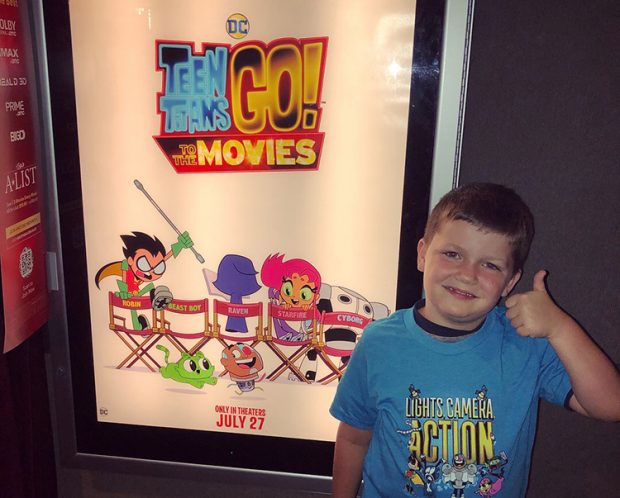 Really, the only review you need.

How funny is it, really?

The biggest laugh from me was for a scathing Aquaman joke. ‘Nuff said.

Disclaimer: I received complimentary movie passes to the film. However, all opinions are my son’s and my own. For more info on the film, visit TeenTitansGO-movie.com.

Have you visited and liked Designer Daddy’s Facebook page? GO!