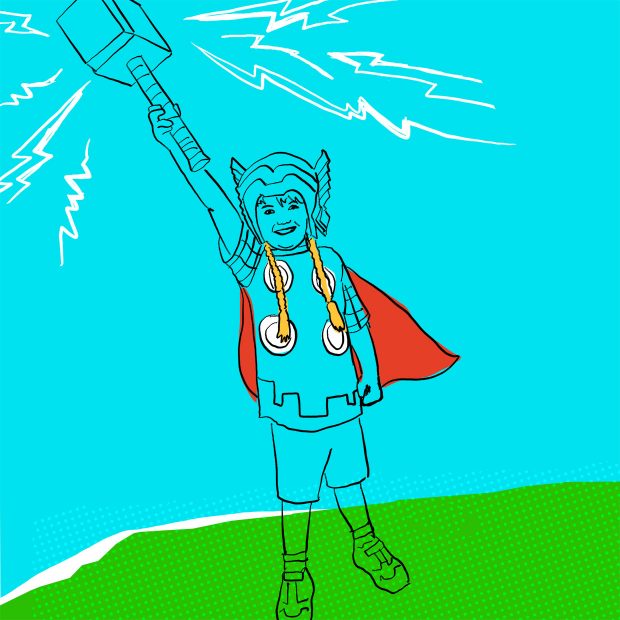 Often not the biggest kid in the class/team/club, Jon has been known to keep an eye out for those even smaller than him. Ask, and he’s happy to regale you with tales of standing up for friends being bullied, calling out an injustice, or reassuring pals he has their back. He’ll also gladly tell you what he thinks of our president… and what he’ll do to any wall or travel ban threatening to displace his brown-skinned friends.

While Jon certainly excels at the bravura of a champion, he also shows strength in tenderness and true friendship. From an autistic neighbor with challenging social skills, to a classmate with Down syndrome, to an aging family dog, my son has shown time and time again that he truly cares for all kinds of people (and animals), particularly those that need it most.

Jon has grown up knowing he’s the adopted son of two gay dads. Long before he was born, I feared this would be too much for him to carry, but I shouldn’t have worried. Jon never shies from telling anyone and everyone that he’s got a Daddy and a Papa… as well as a birth mom in Nebraska and a biological brother in Oregon. He’s proud of who he is, where he’s from, and of who loves him. And if you don’t like it, he has several books he can recommend or perhaps a rainbow flag you can borrow.

Team Thor, warriors at the ready

One of Jon’s and my favorite fictional warriors is Thor. Actually, mine is Thor, Jon’s more of a Hulk fan. Either way, we both LOVED Thor: Ragnarok when we saw it in the theater, and can’t wait to watch it on Blu-Ray/DVD and reenact all of the epic battles, great heroics, and laugh our butts off at the inevitable gag reel. Thor: Ragnarok is far and away the most fun, most colorful, most over-the-top film in the Marvel Cinematic Universe so far. So get your copy, grab a bucket of popcorn and your favorite warriors, and get ready to Ragna-ROCK!*

*Apologies. As a dad, I was contractually required to make that joke.