I started December with a character from one of the strange, new shows my son watches, and am doing the same here… kind of. While Unikitty (who’s half unicorn, half kitty) made her debut in The LEGO Movie, she now has her own show on Cartoon Network, shown here the day after her eponymous program’s premiere. I love Unikitty’s duplicitous sweetness and rage, which I identify with as both a Gemini and a father.

Building off Unikitty, I decided to do a Cat Week. Below are four feisty felines from the worlds of cartoons, comic books, video games, and internet memes. I actually hate cats, so was happy for this week to end. 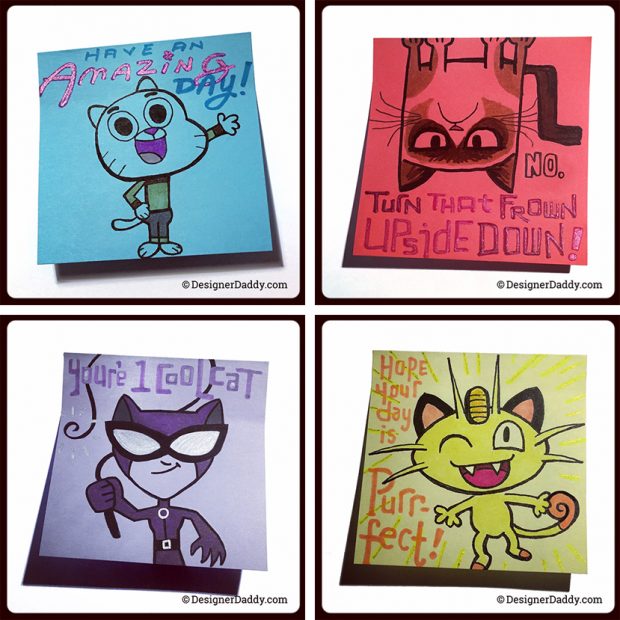 While I’d enjoyed the first Paddington movie, I didn’t feel the need for another full-length film. Yet when Paddington 2 was released, it was soon touted as “the best-reviewed film on Rotten Tomatoes EVER.” It amassed a score of 100%, which led many to think it was a really great movie. After (reluctantly) seeing it on a rainy, weekend afternoon, I left thinking of it as just not terrible. Your marmalade mileage may vary. 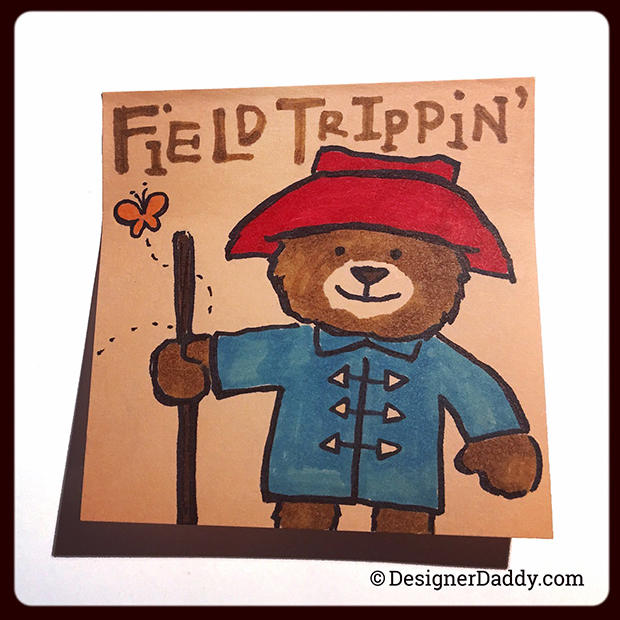 On the previous Friday, I’d been the Mystery Reader in Jon’s class. The teacher schedules these months in advance; parents or grandparents who volunteer to come read to her room of rowdy 7- and 8-year-olds. Jon had pestered me off-and-on during the first half of the year, wanting to know if I was NOW going to be the Mystery Reader. I don’t think he quite understood the meaning of “mystery.”

Alas, my turn finally came, and I was asked to give five clues for the teacher to read to the class prior to my introduction. The teacher’s clue prompts:

The teacher reads the clues and kids start guessing. The assumption is that the child of the reader will eventually guess correctly, then go fetch the reader waiting stealthily in the hallway.

Here were my clues:
#1: My first stuffed animal was a lion
#2: I was born outside of Maryland
#3: I like going to the movies
#4: I love Star Wars
#5: Aquaman is my favorite superhero

Jon (along with a couple of classmates) easily sleuthed my identity when #5 was read. 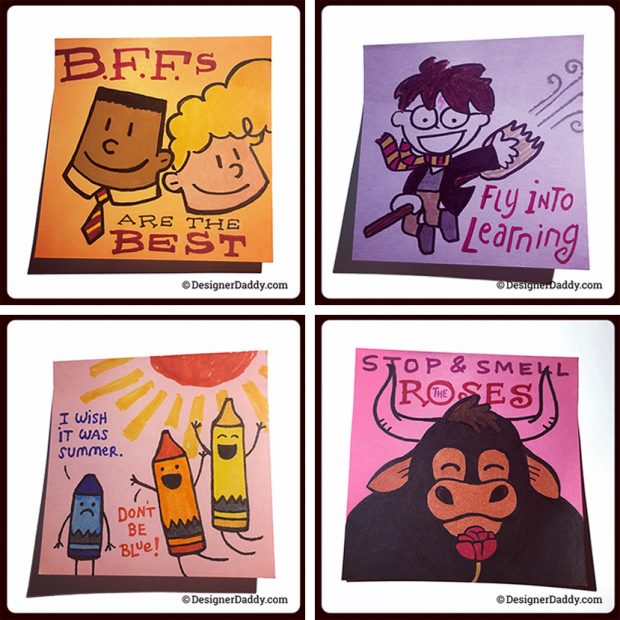 In my role as Mystery Reader, I ended up reading three books — two of which were also represented during this week of all book-inspired lunch notes.

First was The Day the Crayons Came Home, sequel to the wildly popular The Day the Crayons Quit. These are a favorite of mine to read aloud, as I can utilize my arsenal of silly accents and voices. Second was a wonderful book called Marvelous Cornelius, about a street cleaner in New Orleans before and during the time of Hurricane Katrina. The illustrations are magical, the story is sweet and sad and hopeful. It’s also a nice way to introduce conversations about race and racism to younger kids.

Lastly was one of our family’s favorite books, And Tango Makes Three. It’s pretty much a staple in gay dad families, as it tells the true story of two male penguins raising a chick in the Central Park Zoo. While Jon’s class already knew he had two daddies, I think to hear one of those dads read a book about it really helped it hit home. I saw some wide eyes at times and was glad to be the one opening them. And Jon seemed very proud, too. 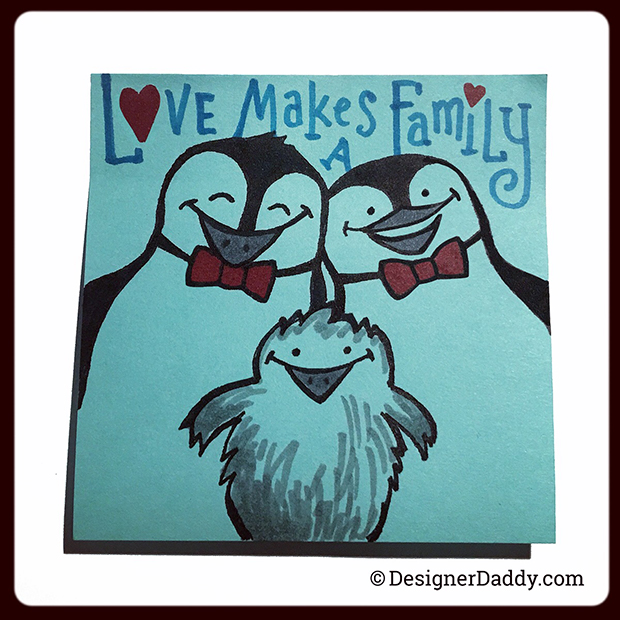 Our second Halloween as a family, dressed in our version of And Tango Makes Three. I sure do miss those days of dressing my kid up as baby animals! 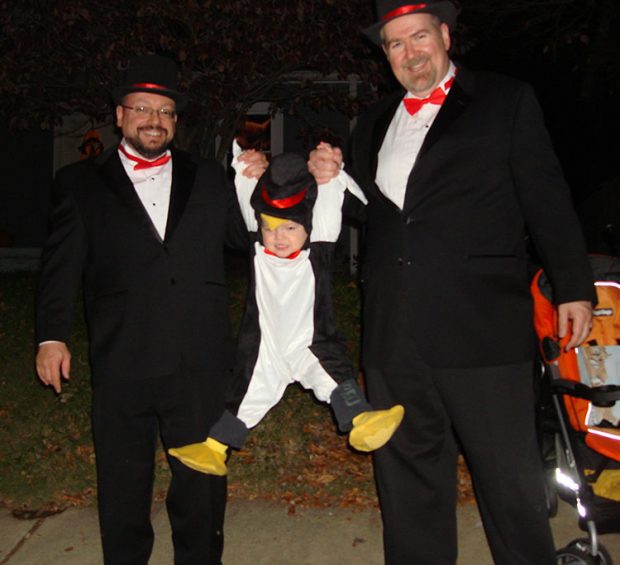 There were many short weeks in January due to teacher days, holidays, and snow days. This week was another one of those, which I started as a Spider-Man themed week. Jon had been watching Ultimate Spider-Man on Disney XD, so I was excited to finally do a Miles Morales note. For those unfamiliar, Miles is a Black/Latinx Spidey from another universe… who natch gets trapped in ours and gets to hang with Peter Parker, the OG Spider-Man. My version of The Vulture is Michael Keaton’s portrayal in Spider-Man: Homecoming. And while Kingpin was most recently seen on Netflix’s Daredevil, his very first appearance was in Amazing Spider-Man #50 (1967). Jon learned about the character through the Runaways comics, which we’ve been making our way through on comic book night.

In the middle of Spidey Week, our family experienced a big, boisterous, sparkly milestone — our first WWE match! While Papa and I are in no way fans of the “sport,” our son is decidedly a true believer. His #1 guy John Cena was not at this show, but another of his favorites, Randy Orton, was.

The “RKO” in the note is one of Orton’s signature moves, and is a play on “TKO” but with an “R” for “Randy.” Or so I assume. Below is a video of Mr. Orton in action, as well as a couple of photos from our very loud, very dramatic experience. 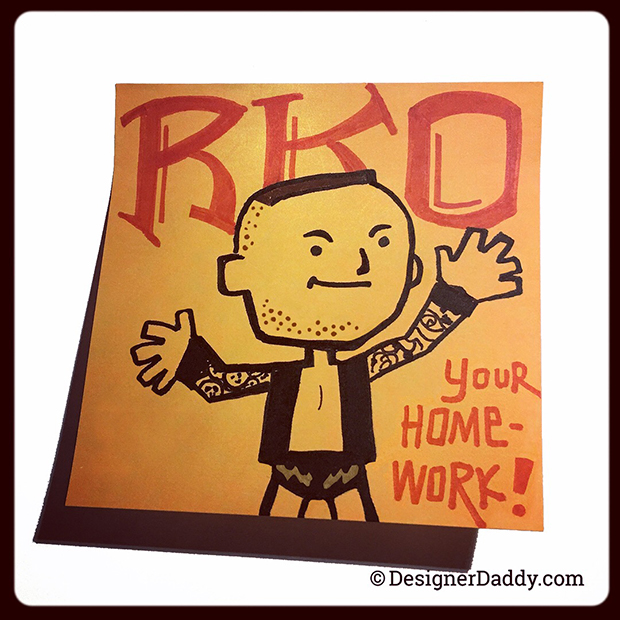 Here’s Mr. Orton in action. He’s the one in the black trunks throwing the other dudes to the ground. 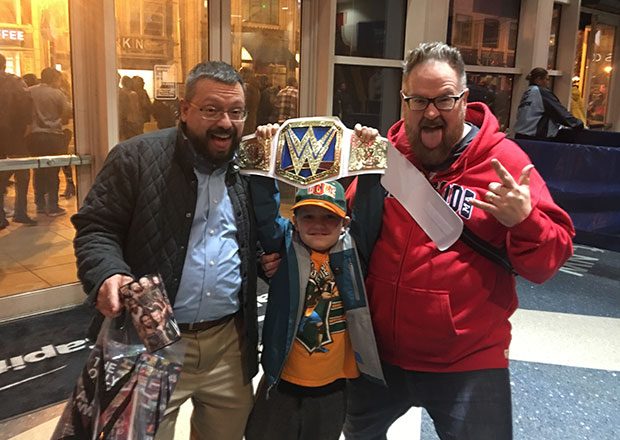 The last week in January saw me heading to New Orleans for the Dad 2.0 Summit. While this was my fifth time attending the blogging conference, it was the first year I’d finished all my notes ahead of time. I chose to feature famous animated and comic book dads, three of which are below. The final two kicked off February and will appear in that wrap-up post.

.
While there were a lot of great requests (as always), I had to go with Rose Tico from The Last Jedi. Especially since she was requested twice! She’s the epitome of girl power, so I drew her in the famous Rosie the Riveter pose, throwing in a spacey zapper tool and X-Wing for reference. 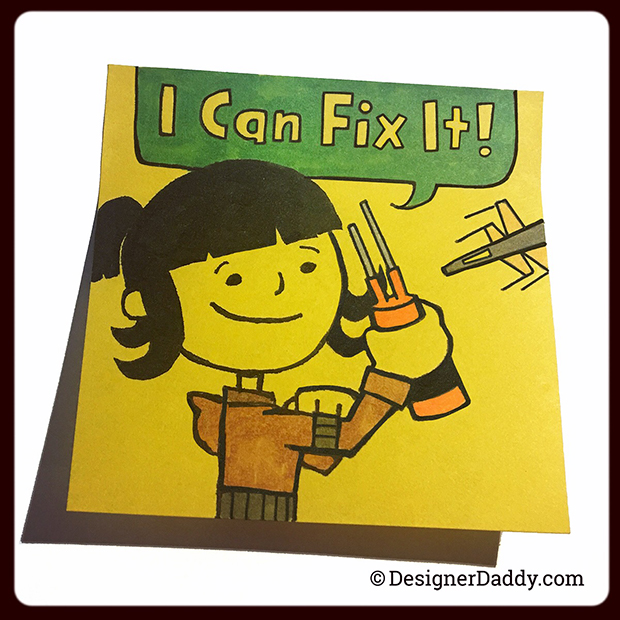 One of my winners posted the photo below to Instagram, showing how she used the note in her daily planner. Very creative! 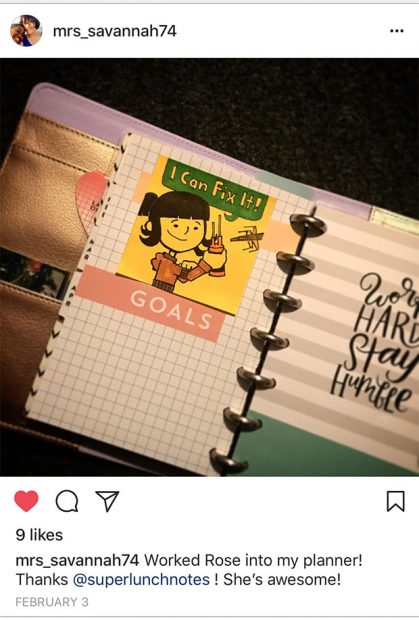 See you soon for February’s recap of life and lunch notes! (Ooh, should I use that as a new name for this? The answer is yes!)

Disclosure: This post contains some affiliate links. Meaning, at no additional cost to you, I will earn a small commission if you click through and make a purchase.

Be sure to get your daily serving of lunch note inspiration at SuperLunchNotes on Instagram. Already following? Share with a friend! Or three!