The last couple months of the year are a downhill avalanche of festivities for our little fam. Halloween quickly gives way to Jon’s birthday week, which then steamrolls into Thanksgiving, and then it’s just all-holidays all-the-time until January 2nd. Mixed in with the holidays and birthdays was a lot of movie-going â€” all of which provided some great lunchtime inspiration. So grab some popcorn, a turkey leg, and a slice of birthday cake â€” here comes November’s SuperLunchNotes!

Thor: Ragnarok was a fun, candy-colored departure from the previous two Thor films. And it was amazeballs. Amidst the dazzling effects, incredible action, and brotastic humor sits Cate Blanchett’s scene-devouring, villainous Hela. The headdress alone warrants a gasp or two, as does the borderline profanity on her day’s lunch note. ðŸ˜‰

Jon’s birthday is November 7th, so in honor of his 8th trip around the sun, I did a week’s worth of similarly-named superheroes. The apex was on Jon’s actual birthday â€” his favorite real-life hero, wrestler John Cena. 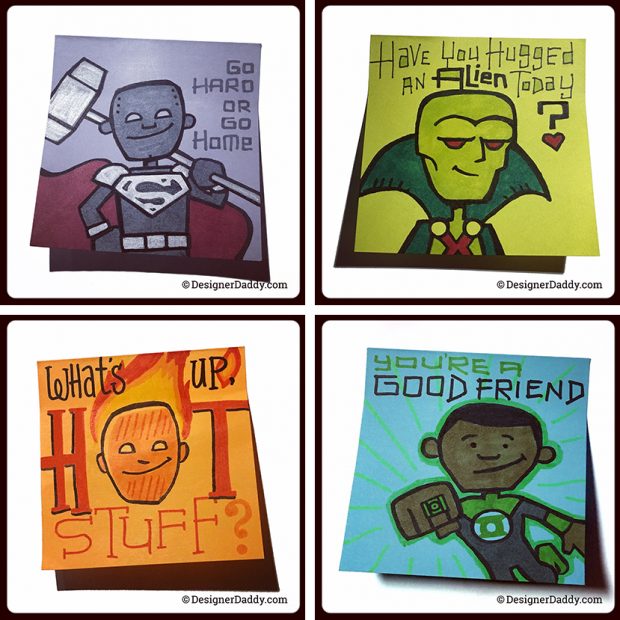 Not only did our full-tilt 8-year-old get a John Cena note in his lunch, he also dressed as Cena at his birthday party (as he did for Halloween). His crafty dad even customized a cake with some Cena flair, complete with a wrestling ring made of silver string and swizzle sticks. 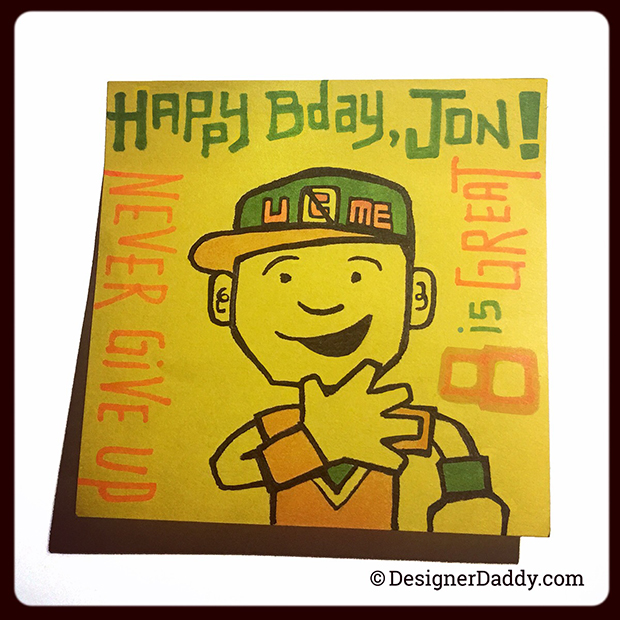 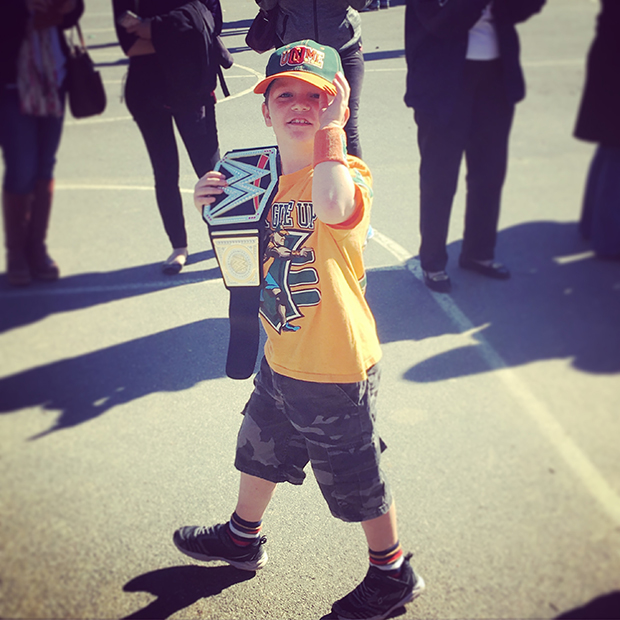 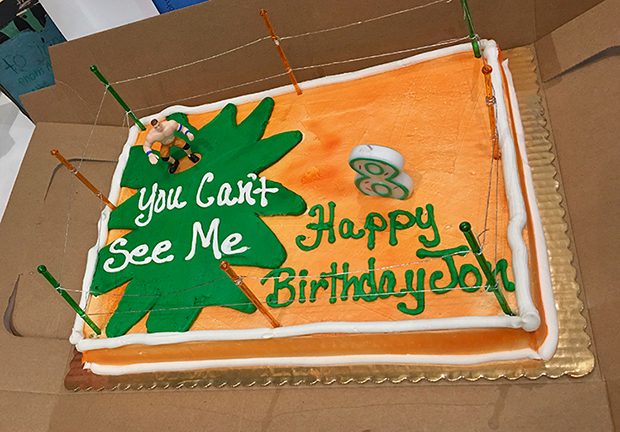 I got a little crafty with a John Cena-themed birthday cake. 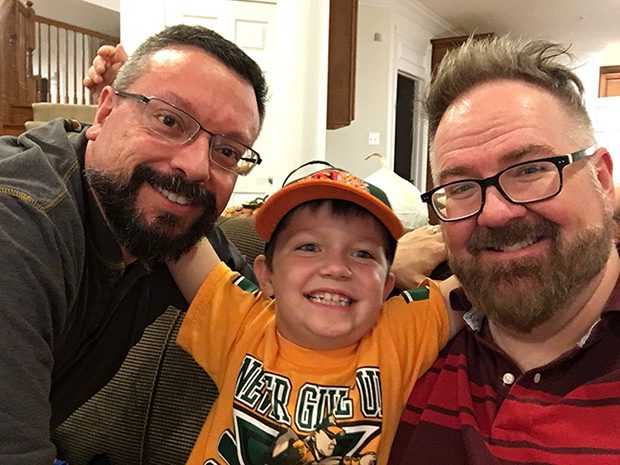 Happy kid at the end of a very happy birthday!

The next week was another momentous one â€” the premiere of the Justice League movie! Yeah, I know the critics panned the hell out of it, but being able to see Aquaman on the big screen was mind-blowing for this lifelong Aqua-fan. And by the end of the film, Jon claimed Aquaman was his favorite Justice Leaguer now, too!

I took inspiration for the notes from the movie posters, which included a tagline incorporating the symbols of the six Leaguers. I’m not sure if Jon picked up on that, but I sure had fun doing it. ðŸ™‚ 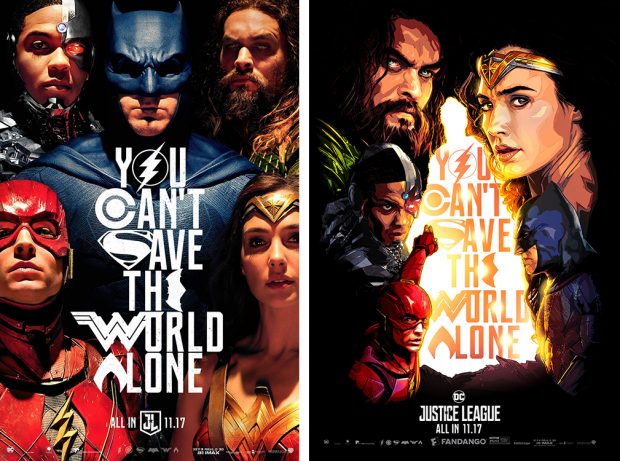 The week before Thanksgiving was a short one, so initially I was befuddled as to what the theme would be. But then the show Runaways debuted on Hulu, so I doodled mine and Jon’s favorite character, Nico. Every Wednesday night is comic book night at bedtime, and for the last couple of months we’ve been reading through the Runaways comics â€” highly recommended reading. The show, however, is a bit too mature/talky/boring for Jon, much to his chagrin. 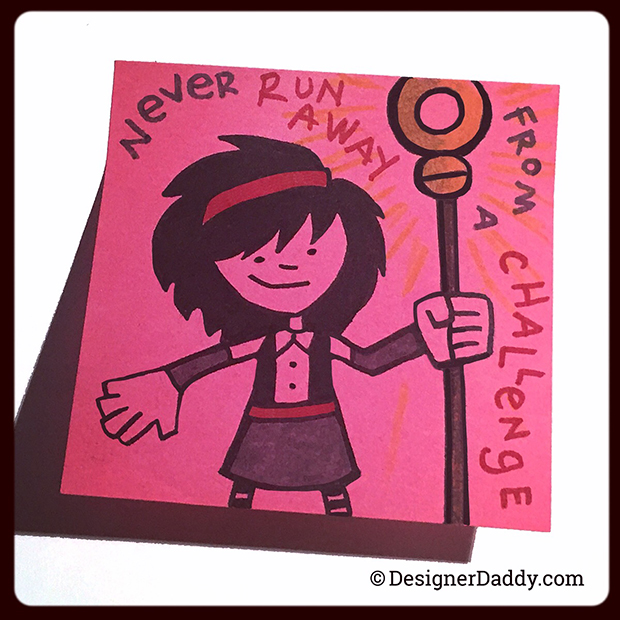 However, instead of doing more Runaways characters, I followed the magic theme instead. Fun fact: this is the second appearance by Aladdin‘s Genie. The first time was in August of 2014, as a tribute to the recently-passed Robin Williams.

Due to a short bout with strep throat, the final week of November was another short one. Having just seen Disney’s Coco, I chose to draw the senseless/streetwise dog, Dante. This inspried me to do a couple more movie sidekicks: Iron Man’s right-hand iron man, War Machine; and everyone’s (new) favorite droid, BB-8*.

And yes, there will be more Star Wars notes in December’s wrap up, related to the release of The Last Jedi! 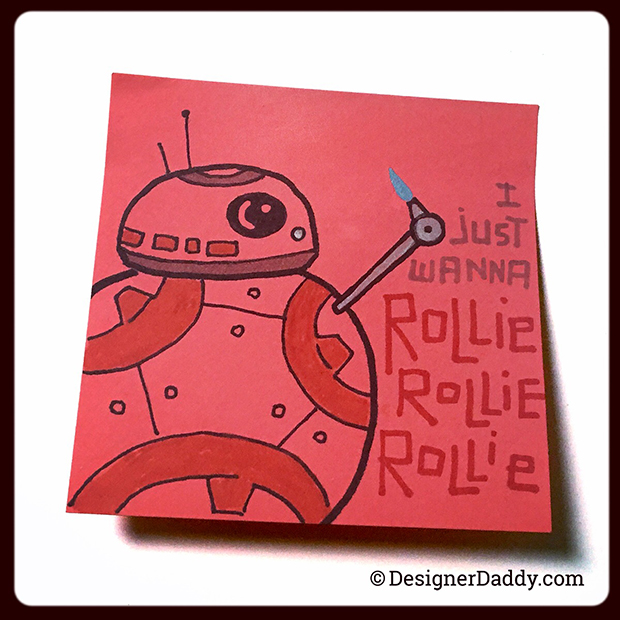 Finally, a very special request lunch note. For the last two year’s, one of Jon’s classmates has been a boy named Finn, who has Down syndrome. Jon considers Finn one of his “buds.” One afternoon at pickup, Jon was visibly upset â€” he informed me that the following day would be Finn’s last at his classmate. Finn was transferring to a different school (for special needs kids). A couple of times on the ride home, Jon explained how he was happy for Finn and his new school, but sad his friend was leaving.

I floated the idea of doing a lunch note for Finn, which Jon immediately liked. “Do Garfield!” was his quick and excited response. “He’s Finn’s favorite!” 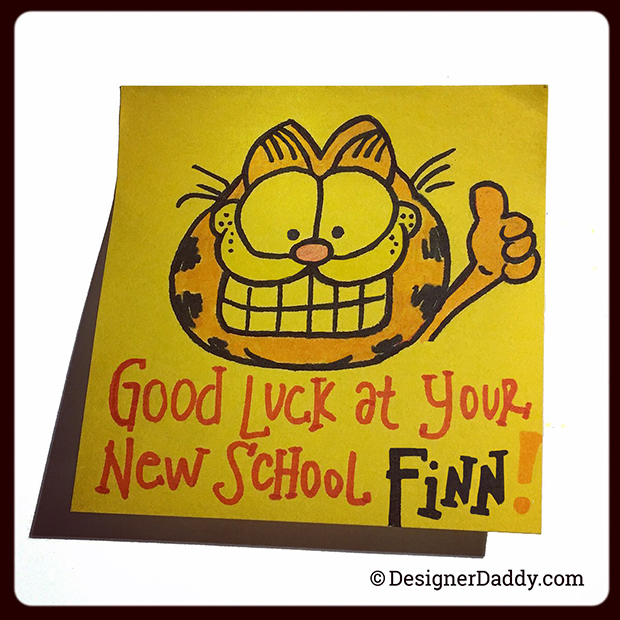 Be sure to get your daily serving of lunch note inspiration at SuperLunchNotes on Instagram. Already following? Share with a friend!

*In case you don’t get the BB-8 note reference: