“Their story is one of the reasons I love my job.”

A couple of my favorite gay dads (and favorite people in general) recently appeared on The Ellen DeGeneres Show to talk about one of my favorite charities, Comfort Cases. I got some behind-the-scenes scoop on the experience from this amazing family I’m privileged to call friends.

The latest adventures of Rob and Reece Scheer & family found them being contacted by Ellen’s people back in February. They had seen the video produced by Upworthy, which at that point had over 11 million views. (It currently has over 83 million.) Inspired by the Scheer’s story and Comfort Cases mission, Ellen asked them to be on her show.

The interview happened back in March, but Ellen was so moved by the Scheers, that she decided to produce an original video segment to accompany their appearance on her show. If you haven’t watched the video yet, scroll up and do it now to avoid any spoilers! 🙂

Fun fact: The segment was filmed on the Warner Bros. back lot, in front of the Gilmore Girls house!

Tell me about the moment in the video when Greyson (their 10-year-old son) teared up.

“Oh my gosh, that was so not expected. That was absolutely — ugh — it just tore my heart out. But it validated to Reece and I that while we may not be perfect, but we are trying our best to make it work.”

Other than the interview, did you have any other interactions with Ellen? What was it like backstage?

“Ellen was really super nice. She came behind the stage to meet our kids and talked with them in the hall. She did a photo op with the whole family; it was perfect.”

“But it was also crazy. President (George W.) Bush was there that day, which made a hectic situation even crazier. (Hip-hop artist) Future was there as well, and so of course my kids were going berserk. We met him and he was so nice to the kids.” 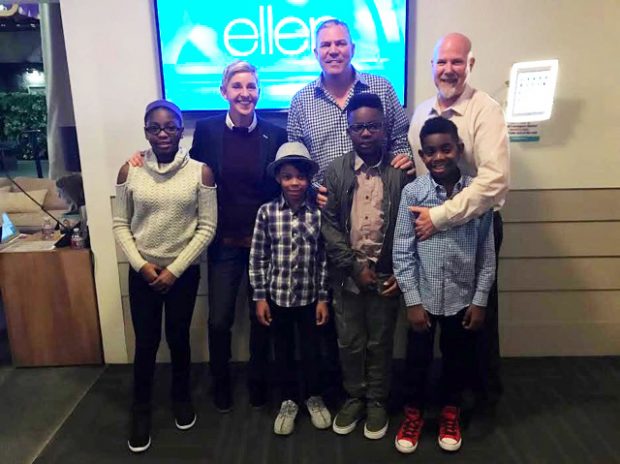 It’s only been two days since the segment aired — what kind of increase in donations have you seen?

What’s next for Comfort Cases? You mentioned on the show about going national — what does that entail?

“Well, first of all, Samsonite was absolutely amazing. This was one of the biggest donations that has been given out on the Ellen show. $50,000 is going to help so many kids. And it’s going to give us the chance to go national, with the goal of having a Comfort Cases in every state.” 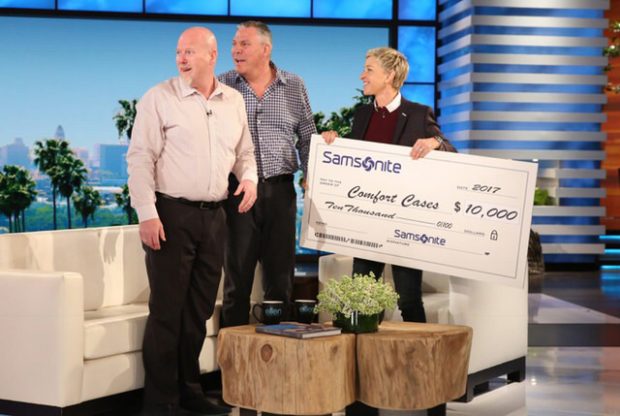 What can readers do if they want to get involved with Comfort Cases?

“Easy! Go to ComfortCases.org and click “GET INVOLVED!” We’re always in need of supplies and volunteers, and it also gives some ideas of how to fundraise on your own.”

(There’s also a big DONATE button on the top of the page. –DD)

Last question. What are you guys doing for Father’s Day?

“In the morning I’ll be taping an interview with Chris Wallace on Fox News. Then we’re all going to Awesome Con (DC’s Comic Con). Our charity was chosen to be featured and we’ve been asked to make an appearance. (chuckles) So we’ll be spending our special day doing Comfort Cases stuff!”

I’ve heard Rob tell his story many times, and each time he talks about the importance of leading by example and teaching his kids what it means to give back. Considering all that this family has gone through in their lives, this level of generosity is both inspiring and challenging.

Dads, I challenge you (and myself) this Father’s Day to find a simple way to teach your kids about giving back. Donate to a charity like Comfort Cases; volunteer at a soup kitchen; clean up the neighborhood. These lessons instilled in them — and the people this will help them to become — are far better than any necktie you’ll ever get. Happy Father’s Day!

New to Comfort Cases? Read all about the organization and the Scheer family here.