Who Is Your Hero?

I’ve written about Super Heroes on this site a lot. Like, a lot a lot. Spandexed super beings have been part of my life for as long as I can remember; and becoming a father only deepened my fandom as I passed down all this adoration, excitement, and knowledge to my son. Yet while I ensure that Jon is up on his origin stories and rogues lists, I want him to know heroes exist in real life, too. 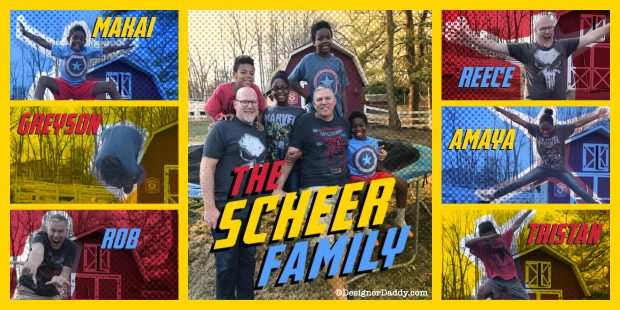 A Family of Super Heroes

We’ve been lucky enough to know such a team of heroes, in the form of The Scheer Family — who I’m nominating as part of Marvel’s Heroes Come In All Sizes campaign!

I’ve written about the Scheers before, too, but am always thrilled to share their heroic story.

Dads Rob and Reece, along with kids Amaya, Makai, Greyson, and Tristan live on a small farm outside Washington DC. We first met them a few years ago at one of their epic pool parties, their house and yard packed to overflowing with other families like ours: gay dads and their adopted kids. While our special community has some things in common, each family has their own unique origin — and Rob and Reece’s is one of the most amazing I’ve heard.

The couple initially looked to international adoption to build their family. But Reece urged Rob to consider the local foster system, as Rob himself had grown up in foster care. Orphaned from abusive parents at the age of 10, Rob then bounced from home-to-home, eventually becoming homeless his senior year of high school. One striking memory he often shares is of carrying all his possessions in a trash bag as he was sent to each new foster home.

Rob and Reece soon became foster parents to a pair of siblings, shortly thereafter taking in two more children. Within four months, their family went from two to six (all of the kids have been adopted), and it’s been a whirlwind of love ever since. But to Rob’s amazement, each of their children also arrived carrying trash bags.

In response, Rob started a charity — Comfort Cases — so that no foster kid would ever be reduced to carting their belongings like so much garbage. He called upon friends and colleagues to donate backpacks and duffel bags, pajamas, toiletries, blankets, stuffed animals, and activity books. They packed them up according to age and gender, and delivered them to local foster care offices.

That was in 2013. Since then, Comfort Cases has delivered over 25,000 cases to kids in the DC, Maryland, and Virginia foster care systems.

Though Rob is the founder, the entire family gets involved in “packing parties” held several times a year, where supplies are packaged assembly-line style. Our family has attended a couple of these, and they are truly a sight to behold, with dozens (sometimes hundreds) of people working together to help deliver hope and care to children in need.

Certainly the Scheers’ charitable work is heroic, but so are their everyday lives. Merely by existing as a family, they tackle issues of gender norms, sexual orientation, race, economic disparity, abuse and disability on a daily basis. But you wouldn’t know it to meet them. They’re a family — one that was hard fought and full of struggle and baggage, but one that thrives and loves and shares that love with others. Super Heroes, for sure.

Heroes Come In All Sizes

Marvel has long been at the forefront of pop culture in addressing topics like gender, race, religion, disability, and sexual orientation. And Marvel has a hero for everyone — for all the brave and inspiring people you know and admire: the babysitter who possesses Black Widow-like skills when maneuvering your kids into bed; the friend that employs Deadpool-esque humor while bravely battling cancer; the classmate who defends against bullies with the loyalty of Wolverine. 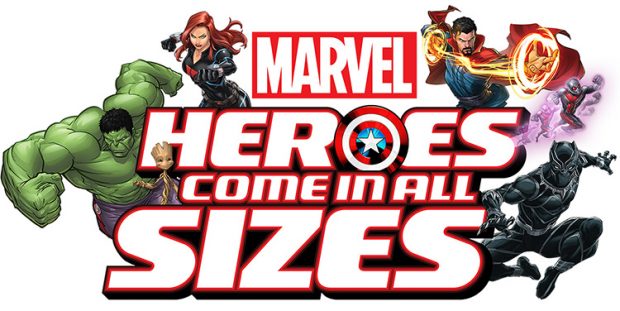 Who are the real heroes in your life? Tell me in the comments, and be sure to nominate them on Facebook, Twitter, or Instagram. Use the hashtag #WhoIsYourHero, so I can check it out and give it a share or retweet!

Want to brag about your hero AND win them some cool merch? Visit Life of Dad’s Facebook page and add your nomination there, too!

I collaborated with Marvel and Life of Dad for this campaign, but my opinions are my own.