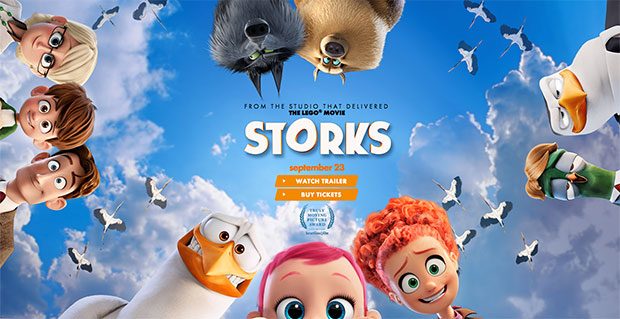 Additional trigger warning: If your child is adopted — particularly if they were in foster care — note that they refer to the character Tulip as “Orphan Tulip” several times. For the most part, this stops when Tulip explains, “that makes my heart hurt.”

Final trigger warning: If your child has questions about where babies come from, expect this film to raise even more.

Multiple triggers aside, I enjoyed the movie more than I anticipated. Maybe it’s just my conditioning to lower the bar for any non-Disney film, but I found myself sincerely belly laughing at some of the sight gags — and even more so at the subtle, meant-more-for-mom-and-dad jokes.

To revisit the Disney comparison, Storks certainly lacks some of the story and character depth the Mouse House is known for. It’s quickly apparent that Nate’s parents don’t want/can’t have any more kids, but it’s never explained why. That in itself didn’t bother me too much, but it seemed like they were on the verge of explaining why a couple of times, but it was left unanswered.

But to Storks’ credit, no parents are washed away at sea or eaten by barracudas or trampled by wildebeests or shot by hunters. Tulip is an “orphan” because she was never delivered to her parents. While there are some sweet parent/child reunions, the movie also addresses the idea that “family” isn’t just who you’re related to.

Now that I’ve picked it apart, let’s get to the fun stuff. The rapid-fire dialog, wacky action/adventure shenanigans, and melange of colorful characters all make for a big, fun ride. While the swift pace doesn’t allow exploration of some of the sensitive topics raised, I think that’s okay. Enjoy the fun of experiencing the movie, then have some great conversations afterward.

My favorite part: A determined pack of wolves, able to transform themselves into a bridge, a submarine, and several other hilarious, inventive formations.

Our very most-favoritest part: When the baby is delivered at the film’s end, the family poses for a photo: dad, mom, brother, sister. This fades into another family photo, then another and another, each one different in size, ethnicity, and make up. Four or five families in they show a baby being cuddled by two mothers, immediately followed by a family with two dads. Jon and I both cheered with excitement, my son exclaiming, “Two dads just like me!”

On the trip home, Jon explained his idea for a sequel:

“It will happen six years ago, when I was born, and be a real life people movie. Storks deliver me and it will be about how you found me!”

Whattaya say, Warner Bros.? Sounds like a hit to me.

Disclaimer: I received complimentary movie passes to the film. However, all opinions are my son’s and my own. For more info on the film, visit storksmovie.com.

Have you visited and liked Designer Daddy’s Facebook page? Fly on over and pay me a visit!

One response to “Movie Review: ‘Storks’ Better Than Expected”