We Are the Dreamers of the Dreams: RIP Gene Wilder 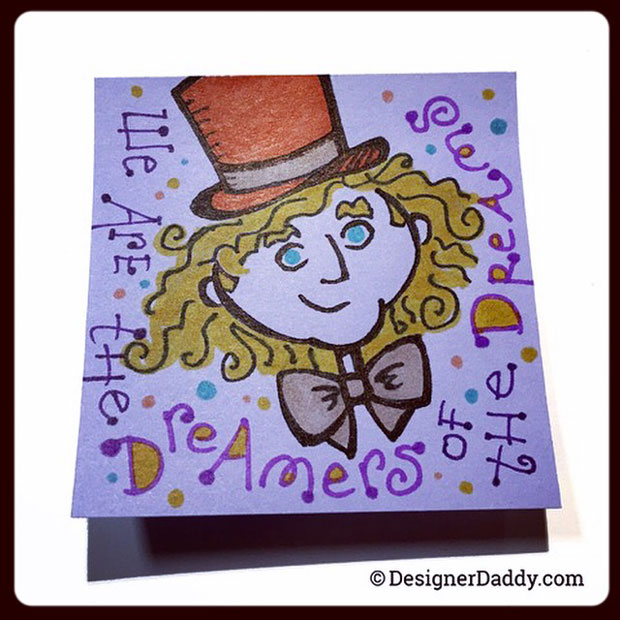 I love Gene Wilder’s Willy Wonka so much. Like most people my age, I saw Willy Wonka & the Chocolate Factory many, many times growing up. I was drawn to Wonka as a kid, and even more so as a parent. Not because he’s sweet and colorful and cheesy — well, not JUST those things. It’s because Wilder also plays him as clever, sarcastic, and a little intimidating.

My son doesn’t scare easily. He was largely unfazed by The Avengers  or The Force Awakens or Jurassic Park. Yet Willy Wonka & the Chocolate Factory is one of the few films that sent him crawling into my lap — of course during this scene. Any kid’s movie that can creep out my un-creepable kid (and cause him to need some cuddles) — while encouraging him to both behave and follow his dreams — is tops in my book.

Speaking of following dreams, the quote on my son’s lunch note today is from one of my favorite WWATCF scenes. Just reading the words themselves, this looks to be an inspiring, heartwarming sentiment. But when Wonka said it, he was smooshing Veruca Salt’s face in his hand, scolding her for doubting the existence of snozzberries. As well he should have, because Veruca was being a whiny brat. And because if Wonka says something is real, it’s real, dammit.

My other favorite role of Wilder’s was Dr. Frederick Frankenstein in Young Frankenstein. In it he played opposite the most amazing comedic actress of all-time, Madeline Kahn. I’d like to think they’re up in heaven reenacting this romantically riotous moment…
.

Rest in Peace, Gene. Thank you for sharing your magic with us — your smart, stupid, silly, sarcastic, snarky, sweet, scary, splendiferous magic.