Original vs. Remake: What’s the same?

Pete is still a shaggy-headed orphan (does Disney love their orphans, or what?); the setting still quaint and remote; and a big-hearted heroine still takes Pete into her care. And while CGI Elliott is decidedly better at flight than his animated predecessor, much of his goofy charm remains in the form of botched landings, and a single, chipped fang.

They show Pete getting orphaned. Subtle and exquisitely filmed, the car accident that kills Pete’s parents sets a sad tone that permeates much of the film — though not necessarily to its detriment. In addition, the lighthouse from the original is replaced by a sawmill, along with a gentle, pro-environment subtext.

But most notably missing are the musical numbers. Daniel Hart’s rich, mystical score and a handful of perfectly chosen songs from the worlds of folk and indie music have supplanted the corny character performances. The film includes originals from The Lumineers, Bonnie “Prince” Billy, and Andrew McMahon in the Wilderness, as well as songs by St. Vincent and Leonard Cohen. The soundtrack did much to maintain the movie’s otherworldly, yet down-to-earth tone.

But what did my kid think?

Three months shy of 7, my son tumbles and tramples through life with a squad of ninjas, Avengers and dinosaurs. But Pete and Elliott resolutely worked their more soft-handed spell on him, too.

As the credits started to scroll and we stood to leave the theater, my son put his hand on my arm.

“My eyes got watery, and a little bit of tears came out.”

On the drive home we talked about why we both cried — he when Elliott was in danger, me when Pete and Elliott were reunited. The conversation also veered into talk of death, adoption, finding a new family, differentiating between real-life and make-believe, and the importance of seatbelts. 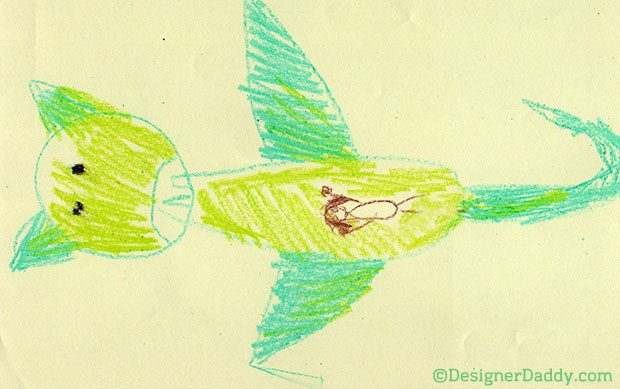 My 6yo illustrates his (and my) favorite part of the movie — Pete riding Elliott in flight.

At one point in the story, Redford’s character — his older, wiser eyes still sparkling — speaks unironically of how magical it was to meet the mythical beast. From any other film company, it would have come off hokey. Yet once again, Disney sprinkles its brand of magic on moviegoers, and the results are part breathtaking, part heartbreaking, and all wonderful.

Disclaimer: I received complimentary movie passes to the film. However, all opinions are my son’s and my own. For more info on the film, visit Disney.com/PetesDragon.

Have you visited and liked Designer Daddy’s Facebook page? Fly on over and pay me a visit!