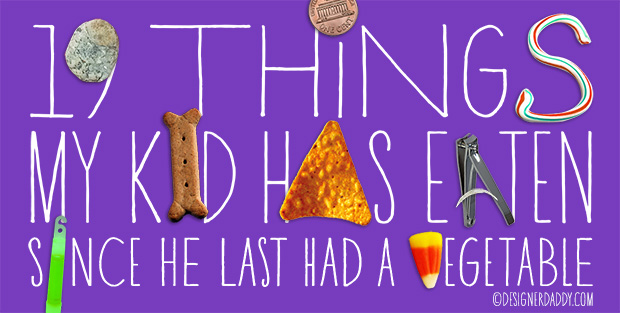 As parents, one of the most common struggles is getting our kids to eat. To eat healthy. To eat what’s set before them. To eat at all.

My son’s mealtime issues are multi-tiered — a parfait of frustration, if you will. Sitting still (or down) is a frequent battle; and as he’s gotten older, he’s become more resourceful in acquiring between-meal snacks. But the biggest hurdle has been his continuously dwindling palette, particularly when it comes to vegetables. While we do sneak them in sometimes (pureed cauliflower in pasta sauce is a favorite), the fact remains he won’t knowingly put any sort of vegetable in his mouth.

But before I go on… If you’re one of those Type A parents whose kids have eaten only well-balanced, organic, locally-grown meals since birth, you can just keep on scrolling. We have plenty of inadequacy on our plate already. And besides, don’t you have some homemade kale-quinoa-almond milk popsicles to whip up?

Okay, now that they’re gone, the rest of us can relax a bit and get down to business. As an exercise in catharsis, I’ve compiled a list for you. A ridiculously long, ridiculously gross list of 19 things my kid has eaten (or chewed, or put in his mouth) since the last time he willingly ate a vegetable.

Cringe at the carnage, be strong in the solidarity, and be sure to share your own weird, stomach-churning tidbits in the comments.

I figured I might as well get this one out of the way. While one of the most common and arguably most disgusting things kids ingest, I just don’t get the appeal. Maybe it’s the convenience of the short delivery route, or perhaps it’s a child’s first way of practicing recycling. Whatever the reason, I have no idea what the chemical make-up of boogers are, and I’m okay with that. But I’m pretty sure it’s not vegetables.

As if the boy needs another bad habit. Here’s hoping it’s just a phase, and he doesn’t start biting his…

Shoving his chubby, little feet into his mouth was cute when he was a baby. But now that he’s grown into a human toenail clipper… well, let’s just say I’m keeping the number of the traveling circus handy.

And sometimes collars. Applies to all long-sleeved garments, including shirts, hoodies, windbreakers, and sweaters. He’s freaky, not picky.

This makes me throw up in my mouth a little. But at least he’s getting hydrated. #silverlining

6. Weird strings pulled from the underside of the bath mat

This makes me throw up in my mouth a lot.

No, this isn’t a new super sugary, punch-flavored, Power Rangers snack. It’s what they call the padded sparring gloves my son wears in his taekwondo classes. Apparently their coating is quite tasty, and it’s always a treat for me to see my son’s smile peppered with tiny bits of black rubber at the end of each lesson.

Sometimes he sucks it off the brush, sometimes straight from the tube. Either way, Yay for minty-fresh intestines!

I’ll wager this is one of the more familiar items on lists like these. (What do you mean you don’t make lists of the weird crap your kid eats?) It’s so colorful and smooshy, I understand why children can’t resist a nibble or two. But I’m curious — does it have more nutritional value if it’s in the shape of a carrot?

11. Fringe from a chenille throw

This is why we can’t have nice things. Or at least things with fringe.

Yup, I said rocks. I would say my kiddo doesn’t have the sense God gave a goose, but I’m pretty sure a goose would eat a rock, too. Stupid gooses.

One of the few actual foods on the list, though that’s debatable. We never have these in the house (Because who wants bright orange dust all over their chenille throw?), but whenever my son comes in contact with them at a birthday party or school function, he acts like a rabid dog in a pile of postal workers. It’s not pretty, even with all the bright orange dust.

These handy heroes are the perfect on-the-go snack, especially if you’re in the mood for molded plastic and paint chips. And they go great with almost any beverage. My son’s preference is Robin, The Boy Wonder, paired with a strawberry Gogurt. Holy heartburn, Batman!

Like #13, candy corn, unwrapped Kisses, and stray Smarties are also edible, but not when found on the floor of my car. In June.

Last July 4th, my exhausted child was mindlessly chewing on his glow stick necklace on the ride home. Without warning, he started screaming that his lips and mouth were stinging. After checking the glow stick for leaks (and finding none), it turns out the burning was caused by the layer of bug spray on it. So I guess we can add bug spray to the list, too.

Also normally counts as food. However, “normally” does not include being temporarily rested on the toilet paper dispenser in a gas station bathroom.

While some are actually made from vegetables (the one in question contained sweet potatoes) and do smell quite tasty, I still can’t fathom why my child prefers to put a dog treat in his mouth rather than real human food. Ain’t parenting a bitch?

While I did indeed partner with SmartyPants Vitamins for this post, my list was well under way prior to meeting these fine, vitamin-making folks. It just seemed like such a natural fit. Because my son — he of the oh-so-particular palette, my finicky progeny, the Boy with the Eating Habits of a Deranged Goat — is not the healthiest eater.

I have hope he’ll get there eventually, but in the meantime, I’m glad there’s SmartyPants to supplement what he might be lacking. And besides, I hear they go great with toenails.

What’s so great about SmartyPants Vitamins?

•  Convenient! This first all-in-one gummy vitamin includes a full multivitamin, Omega-3, Vitamin D3 & B12 in each serving.
•  Economical! Buying the same combo of individual vitamins would cost 2x as much.
•  Yummy! Comes in 3 flavors: orange, lemon & strawberry banana. And hey, if my kid will eat them, anyone will.
•  Altruistic! For every bottle purchased, SmartyPants makes a nutrient grant to children in need. 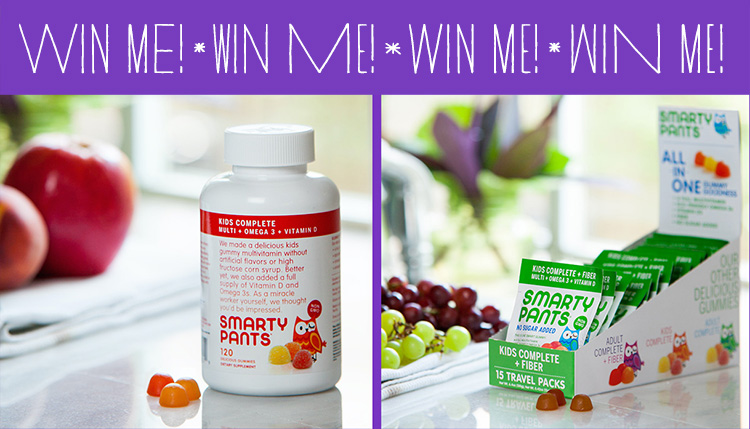 Thanks for reading, entering, and sharing. Don’t forget to take your vitamins!