Merida is my favorite of all the Disney princesses. Certainly because of her tomboyish charm, but mainly because of that magical hair. No, I’m not confusing her with Rapunzel. How else can you explain a girl gallivanting through the forest, shooting arrows on horseback, who a) never misses a shot due to hair getting in her face, or b) never seems to need conditioner?

Egon has always been my son’s favorite Ghostbuster, so it shouldn’t have surprised me when he saw the “E” note and proclaimed, “Egon never got slimed — that was Venkman!” Take a look at the Egon costume I made for my little Ghostbuster. 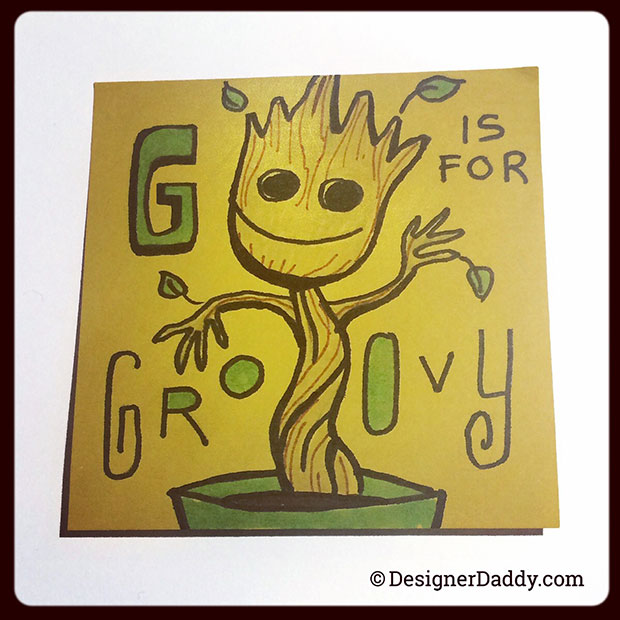 Who doesn’t love Groot? And a dancing Baby Groot? If you’re not smiling, you obviously need a hug. Or to see my son dressed as Groot. 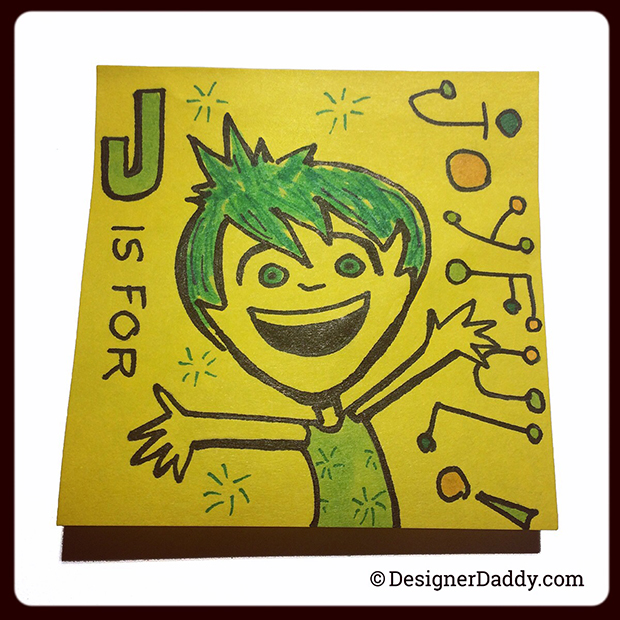 A couple of serendipitous days fell during my run through the alphabet. The first was getting to add some Joy to my son’s lunch the day after Inside Out’s Best Animated Film Oscar nomination was announced (which it went on to win). The film had also won a Golden Globe just a few days prior. 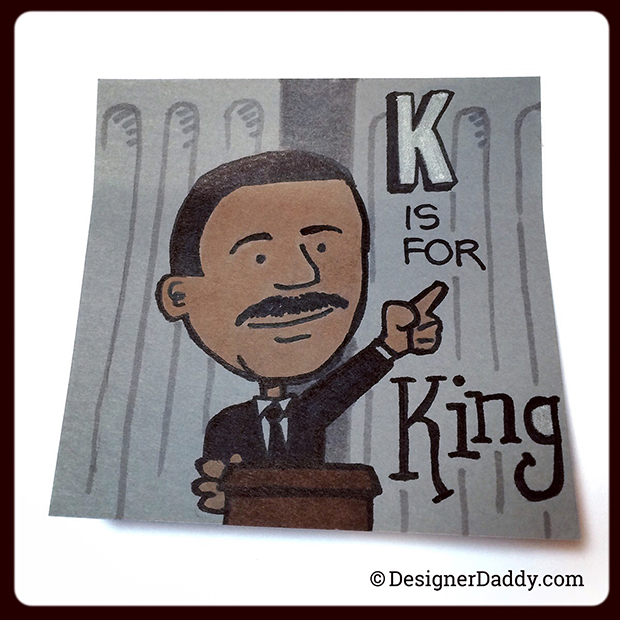 The other wonderful coincidence was getting to the letter “K” on Martin Luther King, Jr. Day, celebrating a real life hero. As I wrote with the Instagram post that day, “It’s kind of amazing to have conversations about MLK with my 6yo. ‘He was a man who changed the laws. Because before, brown people had to be at different restaurants & water fountains. AND THAT’S JUST NOT FAIR!’ Now if I can just get him to stop calling him ‘King Luther.'”

There’s also an incredible children’s book about MLK by Brad Meltzer. I had the pleasure of meeting Mr. Meltzer at the Dad 2.0 Summit recently, and he was kind enough to autograph a copy for Jon. 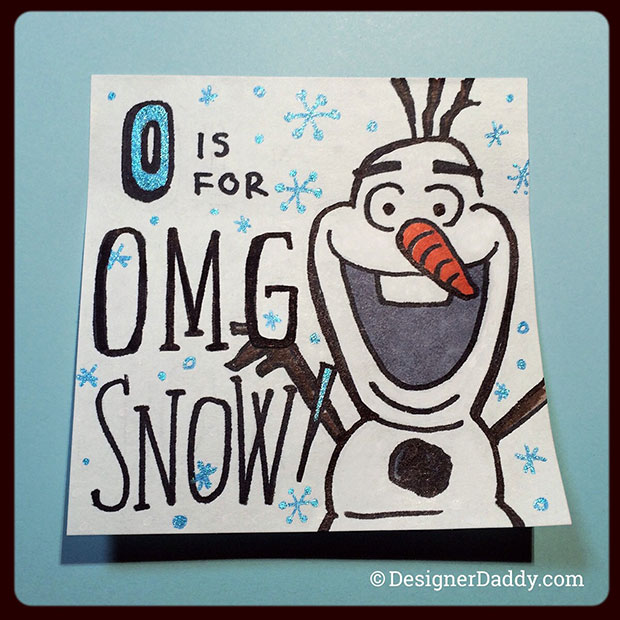 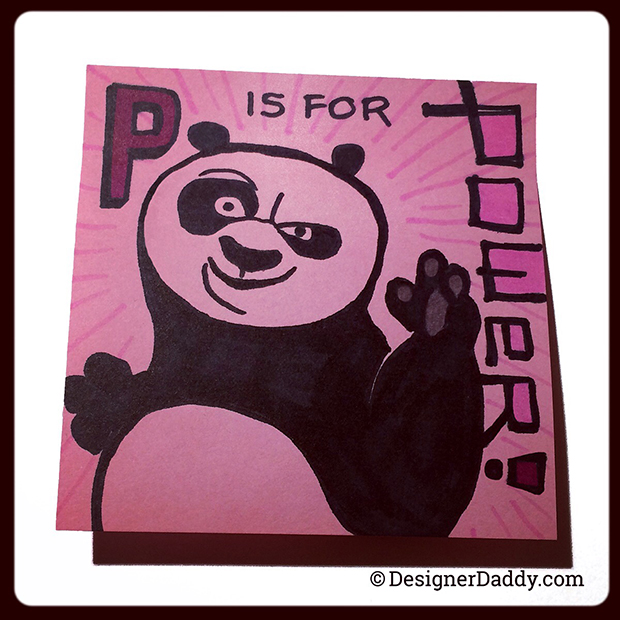 The last super-well-timed lunch note was the “P” note featuring the powerfully funny panda, Po. It popped up in Jon’s lunch the Monday after we saw Kung Fu Panda 3, and the same day my review of the film was published. It focused on the adoption aspect of the movie, specifically regarding Po meeting his birthfather and interactions with Po’s adoptive dad. You can read it here.

A couple of old-school faves from my childhood. Q*bert was also the best part of Pixels, which we had watched during one of the numerous snow days.

A couple more favorites from my youth, both of which have gotten upgrades in recent years. Contemporary depictions of Scooby Doo’s pal, Velma have been pretty cool, as her nerdy look has a certain hipster charm. Underdog, however, flopped in his live action film version, and should have been left well enough alone. 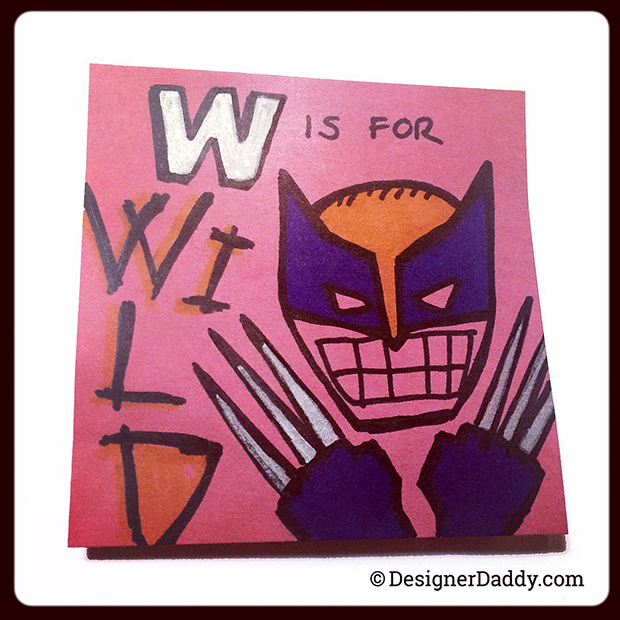 If you’re not watching The Flash TV show, you should definitely check out this current season. Zoom (shown zig-zagging on the “Z” note) is one of the scariest comic book villains I’ve ever seen depicted on television. It probably has something to do with them replacing his bright yellow costume from the comics with an all-black get up, complete with S&M mask.

Where’d I get that awesomely clever title? My pal Chris Routly wrote and illustrated a children’s book by the same name. Be sure and pick up a copy — makes a great read, either at bedtime or mealtime! 🙂

2 responses to “SuperLunchNotes: Now I Eat My ABC’s”