It was especially heartwarming to see Po discover all the ways he’s like the other pandas, as well as Mr. Ping watching the village’s cubs, recognizing similarities to his own young panda. Many transracial adoptive parents strive to help their children connect with a differing heritage or ethnicity; this film sheds some light on what such a journey might entail.

Only two things gave me concern. Though in order to protect Po, it was still disturbing to see the flashback of his mother abandoning him as an infant. And at some point, both of Po’s fathers lie to him: Li Shan, when he lures Po to his village with the promise of teaching him to find his chi; and in an offering of solidarity, Mr. Ping confesses to Li Shan that he “lied to Po [about his adoption] for twenty years. He still thinks he came from an egg.” A little cavalier for my tastes, but as we’ve always been honest with our son, it shouldn’t pose any problems.

What ended up (pleasantly) surprising me was how the movie transformed the adoptive vs. biological plot from one of conflict to one of co-parenting. It assuaged my fears of planting doubt in my son’s mind about who might be his “real” parents, and instead turned it into a declaration of how having two dads is just plain awesome. 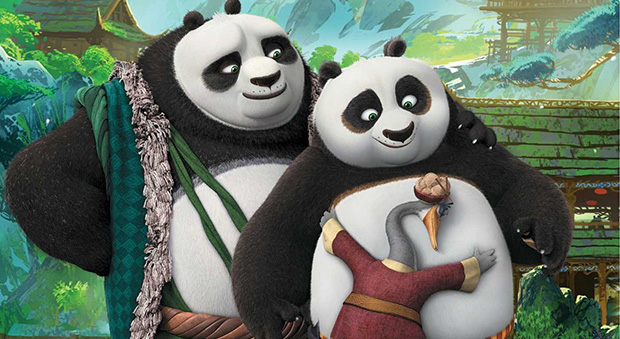 Ultimately, Mr. Ping and Li Shan put aside their differences and came together in support of their son. As each character was shown gearing up for the final battle, father goose and father panda were shown working in tandem, exclaiming my favorite line from the movie, “TWO DADS DEFENSE!”

While Mr. Ping and Li Shan weren’t a same-sex couple, I don’t think that made a difference to my son. All he saw was a kick-ass hero with two kick-ass dads.

It’s my fantasy that some friend or classmate of Jon’s will see the film and recognize my son and his family — perhaps opening a few young (and old) minds in the process.

On all kinds of levels, Po’s journey in Kung Fu Panda 3 is about self-discovery. Near the end of the film, he sums it all up as only a poignant panda can:

“Who am I? I’ve been asking the same question.
Am I the son of a panda? The son of a goose? A student? A teacher?
Turns out, I’m all of them.”

Check out the Moms Movie Minute and Kung Fu Panda 3 page on Fandango for more reviews, articles, and exclusive interviews.

Have you visited and liked the Designer Daddy Facebook page? SKADOOSH! Hop to it, my little dumplings!

One response to “An Adoptive Dad Reviews ‘Kung Fu Panda 3’”