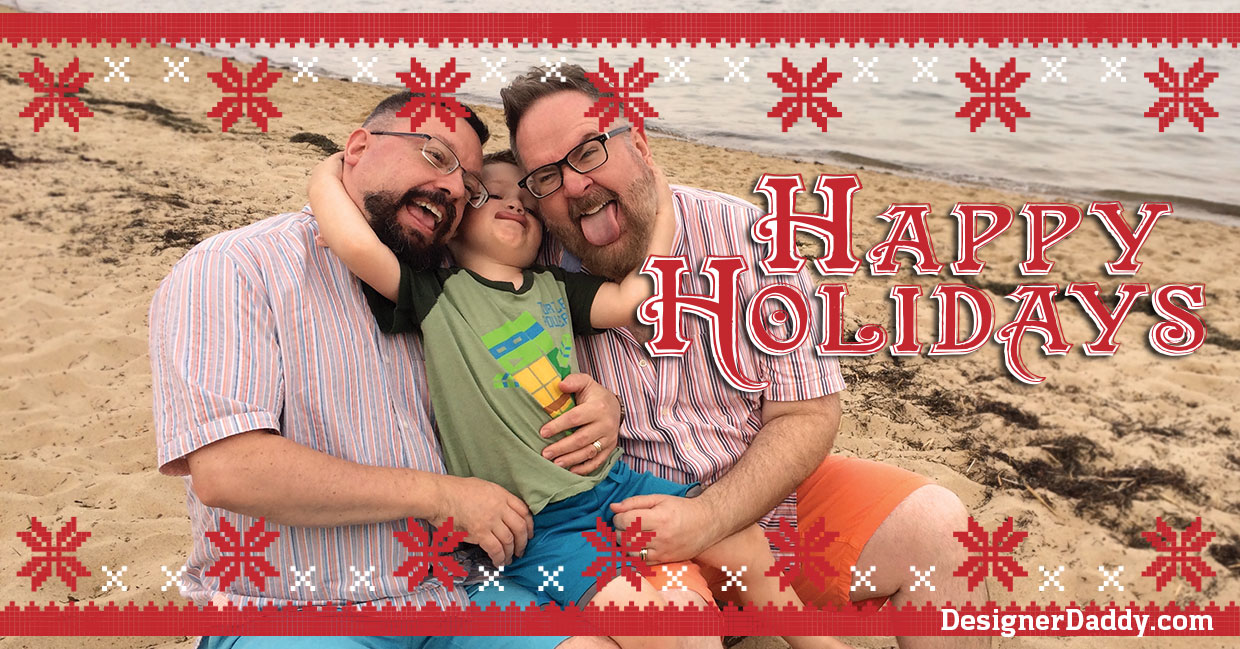 It’s been a banner year for same-sex parents. Marriage equality finally became the law of the land; and as marriages increased, so have the number of LGBT parents. Gay dads and lesbian moms appeared in national ads for soup, shampoo, pain reliever, and formula. And as is becoming a yearly occurrence, NPH and his family slayed with their Halloween costumes on social media.

Yet with all of this increased exposure and acceptance comes increased expectations; expectations to have THE MOST FABULOUS WEDDING, THE MOST PERFECT HOUSE, and of course THE MOST ADORABLE, WELL-BEHAVED CHILDREN. On top of that, I can’t tell you how many times I’ve been told how “lucky” or “blessed” our son is to have my husband and I as his dads. That’s nice and all, but that’s a lot of pressure. And I’m pretty sure he’d beg to differ sometimes. (See #2 below)

I’ve heard it said that parenting is the great equalizer. Stop by our house sometime, and we’ll be happy to demolish every stereotype you’ve ever heard about gay men being tidy… or put together… or having the energy to stay up past 9:00 pm.

So in lieu of THE MOST LEGENDARY HOLIDAY NEWSLETTER, I’m opting for something a little more honest. Unfiltered, even. Please enjoy a glimpse into our family’s 2015 — along with a few holiday “traditions” — in this (very loose) version of The Twelve Days of Christmas.

“Why does a 6-year-old have a wish list?” you ask. Let’s just say Papa has been working very hard to provide for our family, and had a momentary lapse of sanity when he suggested it. I reluctantly set it up, all the while stressing that this was a WISH list, not a WILL DEFINITELY GET list. That information went in one ear and… no, I’m pretty sure it just bounced off his little, determined head.

The list is now up to 204 items. TWO-HUNDRED AND FOUR. Which, apparently is okay, because “Santa can make them all… He’s Santa!!” This is not going to end well…
.

My son is quite the budding artist. His favorite subject matters include rockets, dragons, aliens, superheroes, and dinosaurs. Yet they all end up looking like penises. I’d share some of them with you, but this is a family-friendly blog.
.

I only have one son, but it seems like there are ten of him sometimes. Especially when he’s hopped-up on holiday-level sugar intake. Between school parties, fundraisers from neighbor kids, treats from Grandma, bribes from trips to the mall, stocking stuffers, and leftover Halloween candy, we end up with one loopy, leaping lad.

The living room is the venue of choice for his one-man Cirque du Sucrose, where he bounces from one piece of furniture to the next, until collapsing into his inevitable, emotion-filled sugar crash.
.

…or attending concerts, eating expensive dinners, having adult conversations, or an evening not wearing sweats and a t-shirt. I remember one pre-child year my husband and I went to three holiday parties in one night. It was fun and festive, and we felt very much in demand. Nowadays, we’re still in demand (of a different kind), yet more often than not have to decline holiday parties, Christmas concerts, and caroling expeditions. A) Because we’re old and tired. B) Because our kid is a literal party animal. C) Because babysitters are expensive.

Luckily the bar is always open at home.
.

Seriously, why do we even buy them? Are mismatched mittens a thing now, like for hipsters? If not, I’m making it a thing.
.

I’m not sure why we don’t just decorate our Christmas tree with cotton balls and bubble wrap. If my son’s not trying to be “helpful” by rearranging everything on the tree, he’s racing through the house in his slipperiest socks, invariably crashing to the ground and taking an ornament or two with him.
.

…on the couch, covered in blankets, surrounded by balled-up tissues. This number should probably be higher, but it’s difficult to keep track of all the summer/fall/winter colds we keep swapping back and forth.
.

We are a household of three males. Two of us are often found stumbling into the bathroom in a state of exhausted half-sleep for a middle-of-the-night pee. The other one of us is a 6-year-old.
.

The number of apps my clever offspring manages to download on my iPad… without my approval… every damn day.
.

That’s what our epically picky eater ate for Thanksgiving dinner (and will probably eat at Christmas dinner) instead of the turkey, dressing, ham, mac & cheese, mashed potatoes, pumpkin pie, cranberry sauce, rolls… Oh wait, no he did eat a roll. #ParentingWin!

He also eats his boogers, so here’s hoping there’s some nutritional value in that.
.

Kindergarten started a bit bumpy. And with it came a whole new range of emotions from our increasingly less-little boy — most of which got taken out on his Daddy and Papa. We’ve been threatened with all of the things our son will do when he grows up and gets to do whatever he wants, whenever he wants. We’ve been yelled and screamed and cried at. We’ve even been growled at on occasion. We’ve also been told we’re hated.

I can’t imagine something more heartbreaking and infuriating to hear from my child, yet I try to take it for what it is: my baby growing into a boy, stretching his mind, his heart, and every boundary. He’s making sure I’m still there to hear and feel his anger and frustration; to help him find his way, to let him run ahead sometimes; yet always knowing I’m around for a hug and a laugh.
.

The laughter and smiles, hugs and kisses from my child are what makes it all worth it. Sometimes they’re given freely, sometimes coerced by Papa or me in an attempt to pull our son out of a mope or a tantrum. Regardless, they are what make my days and nights, my weeks and years, and are the surest sign that I’m doing an okay job at this parenting thing.

*Sorry, I couldn’t think of anything clever that even slightly resembled a partridge or a pear tree.

As I mentioned at the start, same-sex parents appeared in national advertising campaigns several times this year. This signals not only that LGBT parents are becoming more “mainstream,” but also that real people — fair-minded, thoughtful people — run these companies. The decision-makers are deciding to be inclusive, critics be damned.

One such company is Plum Organics, who featured a pair of dads in an ad they created as part of their Parenting Unfiltered campaign. I also partnered with them on this post, and was excited to help get the word out about their #ParentingUnfiltered campaign. More than most companies, they understand that this whole child-rearing thing can be a complete and utter mess sometimes.

Please do me a solid and go check out Plum Organics’ nifty Parenting Unfiltered Holiday Newsletter Generator. It’s a quick and fun way to remember and share all of the laughter, tears, and epic fails of the last 12 months.

I was compensated by Plum Organics for my time creating this post, but all opinions (and unfiltered stories) are my own.

Go check out the Parenting Unfiltered Holiday Newsletter I created, by visiting (and Liking) Designer Daddy on Facebook!