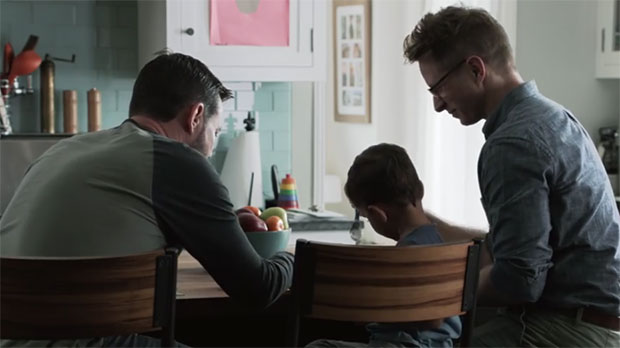 In the last couple of years — leading up to SCOTUS legalizing same-sex marriage — the appearance of gay dads and lesbian moms in national TV commercials and online ad campaigns has become more and more common. I’ve featured many of them on this site. And while I’ve always been excited to see families like mine celebrated this way (or exploited, depending on your level of cynicism), I’ll admit they no longer have the same impact on me as they once did. Until last night.

Take a look at this new Campbell’s Soup commercial I spotted (during Modern Family, natch), which stars real-life gay dads having a “Vader-Off” in an attempt to get their son to eat.

Actors David Monohan and Larry Sullivan — a married couple in real life — star alongside their young apprentice, Cooper, as part of Campbell’s Real, Real Life campaign, and to promote their line of Star Wars soups. The family also appears briefly at the end of a second ad in the series.

In addition to writing a lot about same-sex parents in the media and advertising, I also talk a lot about Star Wars. Before bed last night, I told my very soon-to-be 6-year-old our plans for a Star Wars-themed birthday party, complete with an “official” light saber training session. He literally knocked me over with his exuberant hug and excitedly mashed-up exclamation of “I LOVE YOU!” and “I LOVE STAR WARS!”

I’ve been educating him in the Lucasverse since he was a tiny padawan, with more than a few SuperLunchNotes devoted to its rich characters, a galaxy’s worth of toys, and of course repeated viewings of all six films and the trailers for The Force Awakens. We even made our own Star Wars commercial not too long ago, complete with a double “I am your father” joke…

(Sorry, I couldn’t help sharing that one more time.)

Kudos to Campbell’s. Not only for showing yet another example of the normalcy of LGBTQ parents and families, but that gay dads can be as equally nerdy as our hetero counterparts.