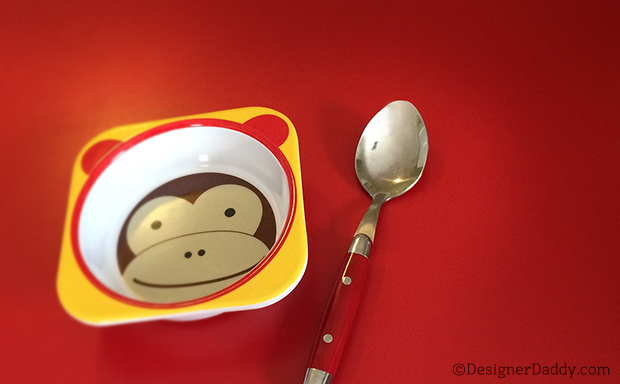 Last night I sat and watched as my son played out an allegory for his life at this moment in time. Having eaten his dinner, my five-and-three-quarters-year-old requested ice cream. I got one of his “baby bowls” from the cabinet, after a second or two of consideration as I skimmed through the options in my well-oiled (though oft -addled) dad-brain:

“Though he does fine with the plates, his clumsiness rules out a ceramic bowl. The plastic ones Papa and I use for ice cream are rather deep — he’s still a bit short to reach inside… Plus a smaller bowl would do better for a smaller portion. Baby bowl it is.”

I placed the ice cream in front of him at the table, then ever-so-carefully scattered out sprinkles until he’d declared there were enough. He then jumped up, scrambled to the cutlery drawer, and came back wielding a large, red-handled spoon. He explained he needed a grown-up spoon because “my mouth is so big.” Truer words.

As I finished my salad, we talked about school and who his new friends were and the song about elephants he learned in music class that day. And he ate his ice cream. Vanilla with rainbow sprinkles, in a too-small baby bowl, with a spoon too big for his talkative mouth. He would pick off the tiniest of bites with his giant spoon, careful to get a couple of sprinkles in each nibble, placing some atop the ice cream if the spoon failed to snatch some. Perhaps his micro-bites were an attempt to avoid brain freeze or him wanting it to last longer or trying to avoid catapulting the entire scoop out of his bowl.

Whatever the reason, I continued to soak in the image of my newly-minted kindergartner with his tiny bowl and huge spoon, reflecting on recent weeks and the growing pains it had brought us. His final morning with preschool classmates and teachers closely preceding the afternoon he met his kindergarten teacher; his first day of class a mere two days later. I worried it was too quick; too abrupt a transition, but he took it in stride. No tears, only excitement tinged with nervousness.

On that transition day, after seeing his classroom and chatting with his Mrs. Kelly, we roamed the halls of the new school as a family, dodging teachers and parents, kids of various sizes and speeds, exploring the cafeteria, the library, the gym. As we maneuvered these large, crowded, foreign halls, my in-between boy would absentmindedly reach up for my hand, feel it was there, then drop his back to his side. Never looking up, never taking hold, always moving forward. My hope, that it was with the knowledge I was by his side, had his back, and was ready to take hold when he needed it. And to let go when he needed that, too.

It was a bittersweet moment, and a portend of the weeks ahead, between then and the ice cream. Weeks that have seen a straining to grow more, to catch up, to chase after the big kids, to be his own person. And the fall-out from falling short or trying to go too far, too soon. Meltdowns and tantrums. Defiance and anger. But with moments of joy and triumph, laughter and maturity in-between.

Have you signed up to have Designer Daddy posts delivered to your in-box? Scroll up and enter your email address under the SUBSCRIBE button. Already subscribed? Share me with a friend! Word of mouth is the best form of social media.

3 responses to “The In-Between Boy”