Welcome to the Party: Gay Men Have Been Appreciating ‘Dad Bods’ for Years 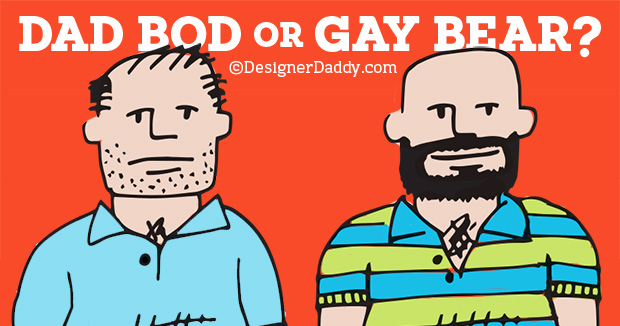 By now you’ve no doubt heard the term “Dad Bod,” and have subsequently seen a marked increase in the number of paunchy, fuzzy man-tummies in your strolls through the Internet.

The term was coined by a college student to describe her ideal guy: a less-ripped/more average fellow who she could cuddle up to and ultimately settle down with. This phenomenon has had beer-bellied men rejoicing, some women crying foul, and me wondering why this is news.

Dad Bods aren’t a new trend, at least not with the always-ahead-of-the-curve Gays. Gay men have been celebrating their stout brethren for decades, declaring definitively that Fat + Hairy ≠ Undateable. They’re called Bears, and as a card-carrying member of this cuddliest of gay subcultures, I want to officially welcome you to the party!

While not without their flaws and stereotypes, Bears pride themselves in being more accepting of the average-to-overweight man. Bears are the “real man’s” alternative to the cliché of a smooth, sculpted Adonis. And as a gay bear and a dad, I am undoubtedly the ultimate expert on what constitutes a “Dad Bod” …and how to make the most of it.

So to my hefty, hetero brothers, let me offer you some of my unsolicited expertise.

While I’m sure you’ve been enjoying this new-found admiration, it’s now time to get off your larger-than-average ass. Having a Dad Bod doesn’t mean you can be a fat, lazy slob and still hope to get a girlfriend/married/laid. Another reason the Dad Bod-loving author cited for her attraction was these men being less intimidating. Women may initially be attracted to you because you’re not as threatening as a muscle-bound gym rat; but that doesn’t mean you get to lay around in the recliner all day, waiting for her to serve you nachos and give you sex. So what’s a husky hunk to do?

I’ve provided a handy diagram and some valuable tips to help you harness your Dad Bod’s potential. Follow this guide, and you will assuredly attract the ladies, while continuing to wallow in the lifestyle* to which you are accustomed. 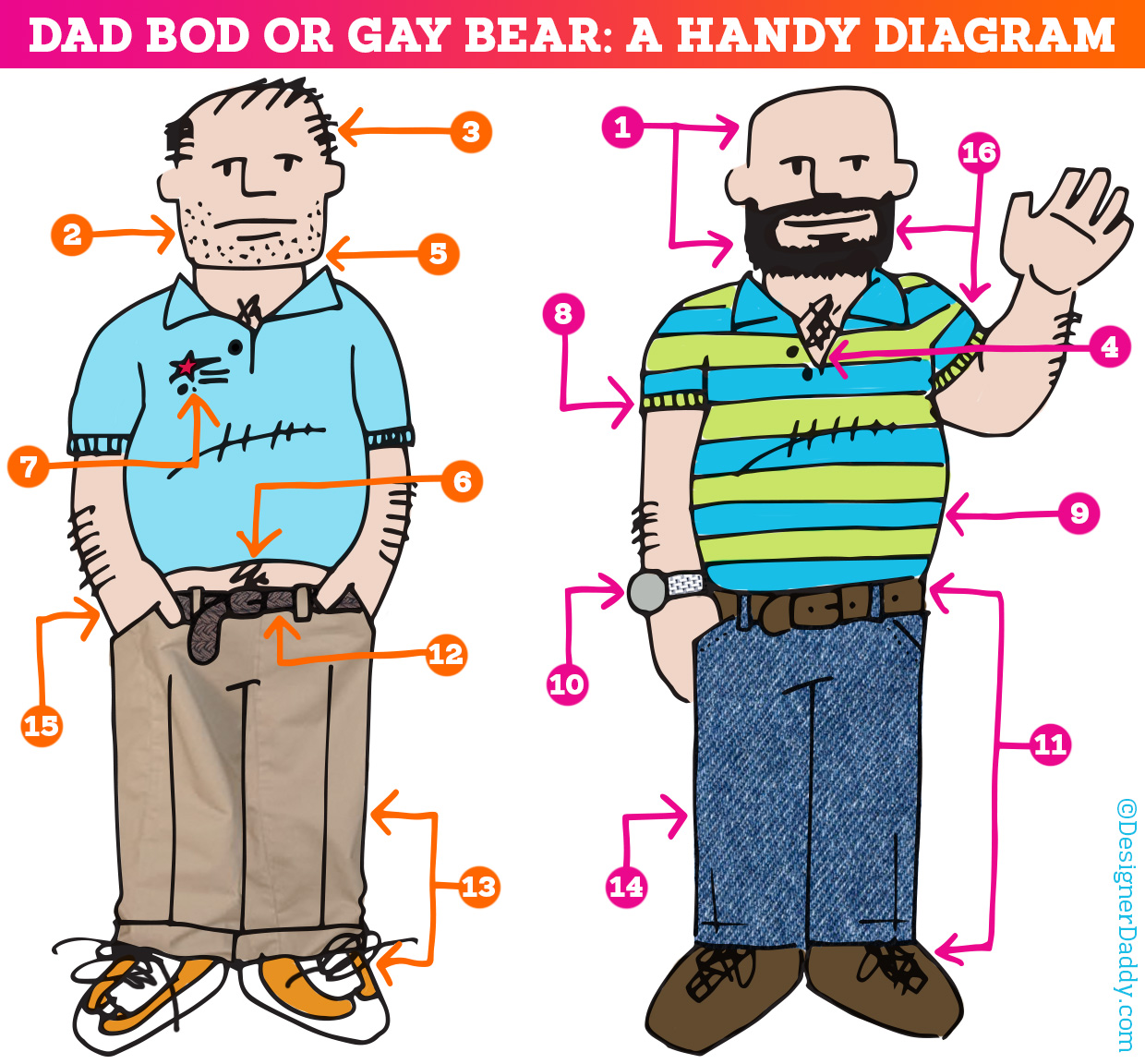 Manage your mane. Contrary to what many women (and gay men) proclaim, there are no magical hair products to fix all that ails or eludes you. It’s all about honesty and confidence.
1. Can you grow a beard? Do it with gusto, but keep it clean and trimmed. 2. If you can’t, don’t try. Uneven stubble makes you look like a serial killer.
3. Trying to rock a combover? Just stop. You’re not fooling anyone, least of all your scalp.
4. Hairy-chested? Never pass up an opportunity to unleash your inner gorilla — but only on your front side. 5. You’ve never heard of a woman lovingly running her fingers through her man’s back or neck hair, and for good reason. That shit is nasty.

Dress for impact. Fat can be fabulous. Fat slob? Not so much.
6. Dad Bod is wearing a faded, ill-fitting polo with 7. an embroidered company logo. Nobody cares where you work, unless it says “CEO of Apple”…and that guy’s gay.
8. Mr. Bear is wearing a shirt that’s long enough to tuck in, but with sleeves short enough to show off his fat arms massive guns.
9. Don’t fear horizontal stripes. Or color. Stripes show that our Bear is proud of his girth. Bold colors show he has a youthful streak without resorting to clothes that are meant for someone 10 years younger and 50 lbs lighter.

Detail your car? Detail your bod. It’s the little things that add up to make you a pudgy package worth unwrapping.
10. Gay Bear is wearing one accessory — a chunky, silver watch. Silver because it’s cool (and not too matchy); chunky because he’s chunky, and proud of it. 11. He’s also wearing a brown leather belt that matches his brown leather shoes. Because he’s an adult who can see.
12. Dad Bod is wearing the braided belt that came with his khakis. I think I just threw up in my mouth a little.

Get a leg up. Let’s get this pants party started.
13. Dad Bod is attempting to pull off khakis and sneakers. Please, pull them off and stop dressing like a 7-year-old. Those of you in sweats but not at the gym? You’re on your own.
14. Gay Bear is wearing jeans that fit — not too baggy, but with just enough snugness to show off his chunky strapping thighs and portly brawny backside.

Attitude is everything.
15. Dad Bod, get your damn hands out of your pockets and stand up straight.
16. Stick out your chest (this makes your man boobs look more like pecs), smile, and wave. They may have come for the Dad Bod, but they’ll stay for Mr. Personality!
.

Got more tips, questions, or case studies that need reviewing? Hit me up in the comments! This trend will subside long before your belly, so make sure you’re equipped to care for your Dad Bod — it’s the only one you’ve got!

*For some Dad Bod dieting tips, pay a visit to my friend and fellow Blogging Dad Bod, Zach from 8BitDad.

Pop on over to Designer Daddy’s Facebook page for tons more fun and fabulousness.

12 responses to “Welcome to the Party: Gay Men Have Been Appreciating ‘Dad Bods’ for Years”