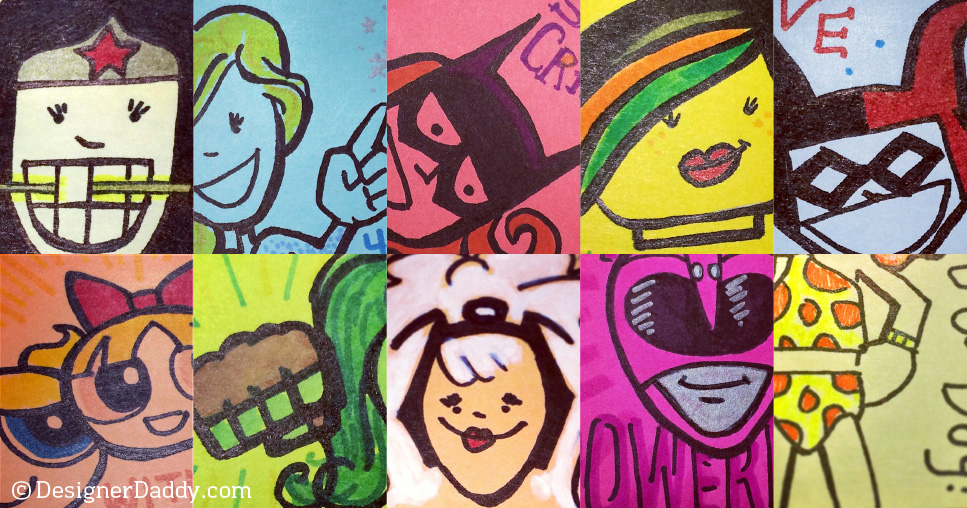 Sure, it’s a little corny — a bit too rom-commy for my tastes — but I’m pretty sure I’m not the key demographic. This is a superhero show for girls. And based on what I gleaned from the trailer, the show-runners see that as the compliment it is, not the insult it’s been for so long. Supergirl focuses on the struggles of a young woman trying to make her way in the world — not just as the alien cousin of Superman, but also as a female. A female infinitely more powerful than society allows her to demonstrate. That’s some nifty metaphor-ing right there, folks.

Yet it’s also a superhero show for boys. Impressionable, young boys that are bombarded from birth with the idea that girls have to be pink and princessy and constantly saved by a dude.

It’s been interesting to see Jon’s attitudes about girls develop in recent months. He declared his intent to marry a classmate (and on one occasion, her mom!) He picked Hello Kitty gummies at the store because, “Girls like Hello Kitty… and I want girls to like me!” He generally holds to the conventional opinion that there are girl toys and boy toys, with no room for deviation.

I’m sure there are ways Papa and I reinforce gender stereotypes — but more and more his influences are from elsewhere: classmates, TV, video games, retail stores. It’s our job as his fathers to exemplify the attitudes we want him to have towards females… though we have none in our family. This fact only underscores the importance of providing good examples of empowered girls (and empowering boys) in the toys and games we buy, and in the books and entertainment we experience together as a family.

One of the few times Jon has voiced a complaint about his lunch notes was when I did a week’s worth of girls a while back. That, combined with evolving understanding of all things boy v. girl, had me feeling a bit tentative each time I sent him to school with a girl in tow.

However, after slipping Wonder Woman into his lunch last Monday, I decided it was time to give “Girl Power Week” another try. When the Supergirl trailer debuted two days later, I took it as a sign Jon was ready!

I was excited and curious as I showed my son the trailer Thursday afternoon. He was a little bored during the initial bit of talking, but his eyes widened as the young heroine rescued a crashing plane; and visibly charged-up when it was revealed the show was about Supergirl.

Flying and exploding stuff aside, I’d like to think the speech delivered by Calista Flockhart’s character midway through wasn’t completely lost on my action-packed boy:

“What do you think is so bad about ‘girl?’ I’m a girl. And I’m your boss. And powerful. And rich. And hot. And smart. So if you perceive ‘Supergirl’ as anything less than excellent, isn’t the real problem you?”

Once we finished, Jon immediately requested a replay. We had just started when Papa walked in from work. Jon excitedly narrated to Papa as he ran up and back from the TV, throwing in a few spins and kicks to punctuate his points. As it ended and Jon flew off into the kitchen, Papa playfully teased, “Someone’s IN LOOOVE…”

Not privy to seeing Jon’s reaction to the initial viewing, I corrected Papa, “If he is, it’s because she can punch a semi truck in half!” Girl Power, indeed.

The trailer ended with a twist on Superman’s trademark intro:

In honor of Girl Power Week (and the Supergirl trailer) being a big hit, below are 10 of my and Jon’s favorite Girl Power SuperLunchNotes!

And be sure and scroll to the bottom for a bonus feature!
.

Even before Wonder Woman, Batgirl was my first favorite superheroine. I was always excited to see her motorcycle at the end of the Batman TV show opening animation, indicating she would be joining the boys for some crime-fighting action. She was smart, independent, and rocked the hell out of that sparkly purple costume!

Wyldstyle is the ultimate action star. As the female lead in The LEGO Movie, she snared Emmet with a mere flip of her multi-colored hair, saved his yellow hide multiple times, and showed him the ways of a Master Builder. “Come with me if you wanna not die!”

While I’ve been able to consistently introduce female superheroes to my son, finding heroines of color is much more difficult. Storm is the most well-known exception, having appeared in four X-Men movies (so far), and three animated series. She’s also been a lunch note three times, always on a rainy day.

Since becoming a dad, I’ve learned way more about Power Rangers than I ever dreamed (or wanted to). For example, did you know the Yellow Ranger has been played by a male a couple of times? Predictably, the Pink Ranger is always female. Yes, it’s a cliche, but it’s nice to know that at least one female team member can be found in all 22 (yes, twenty-two) seasons of the show.

Blossom! Bubbes! Buttercup! Three super-powered girls for the price of one lunch note! Jon has gotten a kick out of the few episodes we’ve seen, and I’m awaiting the 2016 reboot with a mix of skepticism and giddiness. Also, one of my favorite TV theme songs, ever.

As I mentioned, Jon became convinced by a classmate that Frozen was a boring, animated chick-flick. This lunch note was a gentle reminder not only to share, but that he in fact LOVED the film and soundtrack upon its debut. You can bet I will not let this one go…

She-Hulk is nearly as strong as her green-skinned cousin, plus she’s a high-powered attorney! Fun fact: she was created by Stan Lee to preempt the producers of The Incredible Hulk TV show from creating their own lady hulk, preventing Marvel from owning the rights to her.

I didn’t care much for Raven when she debuted in the Teen Titans comics in the 1980s. A little too morose and out-of-control — though she did carry a lot of baggage (dad’s a demon). But I’ve grown to love her on Teen Titans Go! She’s still gloomy, but it’s more of a snarky/sexy/goth, totally-over-it-all attitude that always makes me chuckle. Plus, she’s hella powerful.

I had quite a few Wonder Woman lunch notes to choose from, but I especially like this one because it demonstrates why the OG superheroine is so timelessly popular. She’s a princess and a warrior. A truth-teller and an ass-kicker. In Wonder Woman you find a super-powered being who’s also a loving, compassionate person.

I of course had to wrap up Girl Power Week with Supergirl. I’ll be back in November with my and Jon’s review of the first episode!

A bunch of my dad blogging pals have written great articles (with much more depth and insight than I) on how girls are misrepresented in pop culture, toys, clothes, etc. Check out their great work in the links below!

Adam Hall of Tenor Dad: Why My Daughter Can’t Have Superhero Underwear
Nick Downey of Dad with a Blog: So, You Say You Want a Revolution in the Pink Aisle
Roberto Santiago of Rantom Thoughts: Social Consciousness is a Moving Target
Jason Sperber from Daddy In A Strange Land: Seeing Pink
Aaron Yavelberg of Sleeping On the Edge: What Color is Gender?
Mike Adamick, author of Dad’s Book of Awesome Recipes: Come on. It’s Just a shirt.
Simon Ragoonanan of Man Vs. Pink: A Dispatch From The Gender Frontline.
Darrell Milton of Modern Father Online: Why Did They Need To Introduce A Girl Owl?
Christian Lee of Plaid Dad Blog: I Am Daughter, Hear Me Roar
Vincent Daly of Cute Monster: More than ever, the world needs Supergirl

Fly on over to SuperLunchNotes on Instagram and Designer Daddy’s Facebook page. I promise we’ll have a super-duper time!

4 responses to “Celebrating ‘Supergirl’ and Girl Power With SuperLunchNotes!”