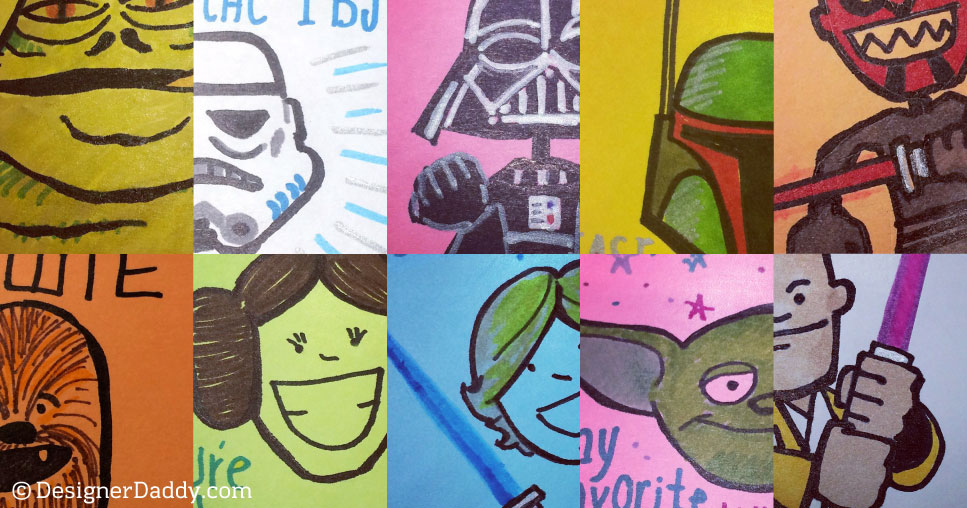 Star Wars Day could also be called Pre-Father’s Day. What other holiday says “Dad” more than one centered around the most awesome movie series of all time, gained popularity as an Internet meme, and is all based on a pun?

To celebrate Star Wars Day, (May the 4th be with you, in case you’ve been stranded in the deserts of Tatooine and didn’t get the joke) Jon helped me pick out 10 of our favorite lunch notes to share with you. I’ve done 25 Star Wars-related notes for Jon since he started preschool, and I can’t believe by this time next year, I’ll very likely have doodled several NEW characters for him!

Be sure and fire up the hyperdrive and jump over to my SuperLunchNotes Instagram account to check out today’s all-new, never-before-doodled Star Wars character that went into today’s lunch!

Vader makes an impassioned demand for his supper, reluctantly adding a “please” at the end. Much like my oft-demanding, begrudgingly-polite 5-year-old. Done for Pizza Day, natch.

Luke may have been whiny at times, but he was still the character I related to the most — and the one I rooted for the strongest. And you gotta love that blue lightsaber and 70s hair flip!

I saw myself in Luke, but my heart belongs to Chewie. He’s made four appearances in Jon’s lunch, this one being the first and most fun.

Done as part of a campaign for Oral-B, Jon still got a kick out of this funny joke Princess Leia is making while attending to her royal smile. As the only female Star Wars lunch note I’ve done (I can’t figure out how to make Amidala funny) I can’t wait to do one for Daisy Ridley’s character in Episode VII!

Kids love monsters. Kids love gross stuff. Ergo, kids love Jabba the Hutt. Throw in the ridiculous word “gogurt,” and this one cracks me up every time.

Jon is just now starting to grasp the idea that actors play the various characters he sees on TV and in movies. Prior to this, no one caused more confusion than Mr. Mace Windu / Nick Fury / voice of Frozone / dude from Jurassic Park / Captial One commercial guy himself, Samuel L. Jackson.

Sometimes my favorite part of doing these notes is when I come up with a really clever (at least in my mind) play on words. Again, cracking myself up with this one.

Another bonus of the lunch notes: new vocabulary words!

It’s always challenging to make the villains seem a little less menacing. Not that my son cares if they’re scary or not — it’s more about not wanting to frighten/worry/get me in trouble with Jon’s teachers.

Yoda is the best. Who else can be wise, adorable and kick-ass all at the same time?

Have you Liked Designer Daddy on Facebook yet? I sense The Force is strong with you, so you totally should. All the cool droids are doing it.