Iceman comes out (with the help of psychic pal Jean Grey) in All New X-Men #40.

Yesterday one of the original members of Marvel’s X-Men came out as gay; and despite the usual online cynics and haters, I’m pretty stoked. While Iceman (aka Bobby Drake) isn’t as well known as fellow mutants Wolverine, Cyclops or Storm, he’s been consistently well-represented in and out of comics since the team of super-powered outcasts debuted in 1963.

My 5yo knows Iceman from versions both animated and “real life.”

In animation, Iceman was one of the “friends” on Spider-Man and His Amazing Friends, and he makes appearances on Cartoon Network’s The Super Hero Squad Show. On the big screen, Iceman has been portrayed by actor Shawn Ashmore in four of the X-Men movies. He had the most screen time in X2, where his strained relationship with his parents after he reveals he’s a mutant is a not-so-subtle allegory of a teen coming out of the closet.

While Iceman isn’t the first gay comic book character, he’s arguably the first one known to the larger non-fanboy public. Rattle off names like Apollo, Midnighter, Northstar, Hulkling, Wiccan, Batwoman (not Batgirl), or Kevin Keller, and you’ll very likely get a blank stare. Even the Green Lantern that came out a couple of years ago wasn’t the one familiar to most.

So Iceman coming out is kind of a big deal. Most importantly (to me, at least), because he’s the first gay superhero my son knows.

It was with a mixture of curiosity and excitement that I shared the news with Jon on the way home from preschool yesterday:

“Hey buddy, you know how some kids have a mom and a dad, and you have two dads?”

“What would you think if a superhero were to be a daddy with another daddy?”

“I THINK THAT WOULD BE AWESOME!”

“Well, Iceman could marry another boy and be a dad with another dad. What do you think about that?”

“COOL!” (My kid is already a master punster. So proud.)

Of course there are naysayers saying all the nays about this being just a publicity stunt; and those poo-pooing it because it’s the younger Bobby Drake from the past who’s time traveled to the present (don’t ask). And I’m sure there are more than a few making homophobic quips (cold-cocked, perhaps?)

And who knows if Jon fully understood what I was saying. Or maybe he genuinely felt excited and validated. Or maybe he was just feeding off his dorky dad’s giddiness. In any case, I’m choosing to take the non-cynical approach, and join with my 5-year-old in celebrating Iceman in all his cool, gay awesomeness.

Oh yeah, and this is went in his lunch today… 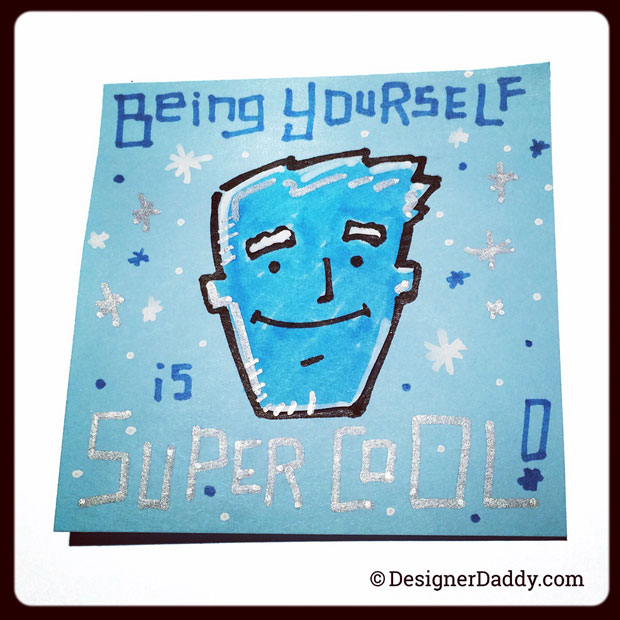 To get Designer Daddy posts delivered to your inbox, scroll up and enter the SUBSCRIBE thingie on the top right of this page!