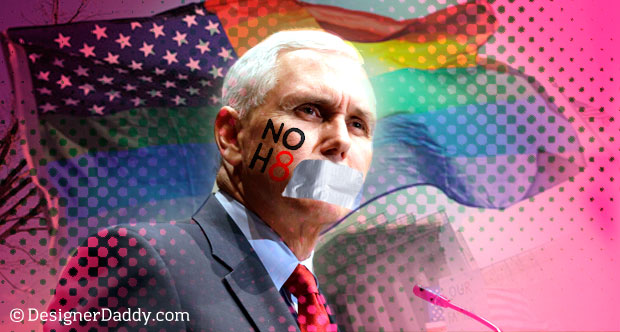 .
Less than six months after same-sex marriage became legal in Indiana, Governor Mike Pence passed the Religious Freedom Restoration Act — a law that many believe will allow businesses to use their faith as a reason to deny service. Now Arkansas has followed suit, an almost identical bill passing through the state legislature and needing only Governor Asa Hutchinson’s signature to become law. These men are clearly threatened by the strides LGBT rights have made in recent years, and are using taxpayer dollars to legislate the equivalent of “My mom made me invite you over, but you can’t play with any of my toys.”

Yet these RFRAs are anything but child’s play. And neither are they meant to protect or restore anyone’s freedom, religious or otherwise. They instead reward ignorance and legalize hatred in a way this country hasn’t seen since the 1950s.

Are they really that worrisome? Hasn’t there been a national RFRA in place since 1993? Yes, but Garrett Epps explains in an article for The Atlantic that these laws are different in two important ways: with the Indiana version giving businesses the same rights of refusal as non-profits, and barring any business for ever being sued for refusing. Epps reassures that the uproar over this bill is warranted:

“The statute shows every sign of having been carefully designed to put new obstacles in the path of equality; and it has been publicly sold with deceptive claims that it is ‘nothing new.'”

So why would the LGBT community (or anyone, really) need these awful pieces of legislation?

1. We need the RFRAs to keep us on our toes.

The Indiana law was birthed in a state where LGBT citizens can legally marry. It serves as a wake-up call from complacency, from the thinking that legalized marriage means we’ve won and guarantees us smooth passage to full equality.

And as the bill is poised to pass in Arkansas, a similar bill is gaining momentum in Georgia (both states where same-sex marriage has yet to be legalized), indicating perhaps less opposition to hate-fueled laws than in Indiana. The fight is hardly finished.
.

The immediate outcry against Indiana’s RFRA demonstrates to other states, politicians, and businesses that while it’s okay to have your religious beliefs, it’s not okay to use them to treat others as second-class citizens. Even still, the attempt to make discrimination legal has emboldened many of those fearful of change.

Hopefully they are all watching — seeing that if you attempt to discriminate against LGBT Americans — and by proxy their friends, family, supporters and allies — you can rest assured you too will be boycotted, publicly scolded, shut down and silenced.
.

3. We need the RFRAs to remind us we’re all in this together.

In the same way Fred Phelps’ hatred united disparate segments of society, these bills are drawing the criticism of a veritable rainbow of government officials, businesses and celebrities. In just the week since the Indiana bill was passed, it has been met with disapproval from the likes of the NCAA, Stephen King, Miley Cyrus, Angie’s List, Apple, the mayor of Seattle, the governor of Connecticut, and Pawnee’s own Ron Swanson.

For those of us not in Indiana or Arkansas, or in states where same-sex couples can’t yet marry or adopt children, or in neighborhoods where it’s unsafe to walk hand-in-hand with the person you love — we need to be reminded that these places still exist in our country, in abundance.

Much progress has been made, but too many of our sisters and brothers need our help; relying upon our voices to encourage them, our support to uphold them, and our votes to protect them.

What we need to do.

.
Raise our voices. Online and in person — show your appreciation to the companies and elected officials that have condemned these bills. Retweet, like, share, and comment on every platform. Here are a few to start: Apple CEO Tim Cook; CT governor Dan Malloy; GAP; Salesforce CEO Marc Benioff; Walmart. Or go here for a more exhaustive list.

Give our support. Or don’t. Similar legislation was struck down in Arizona when it was feared the NFL would pull Super Bowl XLIX out of Phoenix. Money talks, so give yours to Apple, Angie’s List, Gap, and Levi’s. Spend your vacations in Connecticut, Seattle, and San Francisco. Buy music by Wilco or Miley Cyrus.

Cast our votes. Put and keep in office those that legislate equality and fairness. Remove and keep out those coming to the defense of these backwards-looking laws. Among those siding with Pence: (no shockers here) Jeb Bush, Ted Cruz, and Rick Santorum.
.

The Arkansas law passed the state legislature while I was working on this piece, so some of the wording was changed to reflect that before publishing. On a personal note, both of my parents were born and raised in Arkansas, and the majority of my extended family have lived their entire lives there. I’m always ready to defend this beautiful state that gave me my roots, to reassure naysayers that there are fair-minded people in Arkansas and the rest of the South. I’m overdue for a visit, but am admittedly cautious to subject my family to even the possibility of discrimination. I’ll be watching…