There were several distinct differences between my first Dad 2.0 Summit and my second. I was a newbie before, now an old hand. After the previous conference, I left with heart and mind bursting at the seams with ideas and plans and inspiration; this year I was determined to come away with a more efficient focus on ways to be a better writer, a better father, a better man.

Yet the theme common to both — and to the times between and since — is community. Here are some highlights from this too-brief time communing in San Francisco with my Dad 2.0 family.
.

Michael Kimmel, the opening keynote, spoke at length about what makes a good man and a good father. As a professor of sociology and gender studies, and the author of over 20 books, this was right in his wheelhouse. He talked about privilege, referencing one of his own quotes: “Privilege is invisible to those who have it.” Kimmel was referring to men (particularly white men) and their inability to see their own advantage, when compared to women. In fact, the entirety of his talk revolved around men vs. women, and how the differences and comparisons determine how men are viewed (and view themselves) as fathers. Ironically, halfway through the keynote, I started to feel rather invisible. Not once did Kimmel mention gay men or gay dads. For me, being a dad has nothing to do with how I relate to women, but how I relate to my child. Afterwards I thought I might have been being overly-sensitive, yet over the course of that first day, half a dozen guys (one gay, the others straight) mentioned this same omission, wondering if I had noticed and how it had affected me. Admittedly, it threw me a bit. I was well aware the vast majority of the men at this conference were heterosexual; yet I didn’t expect to be reminded of that so prominently and so early in the conference.

The second keynote of the weekend was my favorite by far, as it featured a panel of Silicon Valley executives, talking about their respective company’s benefits, and the ways they support parents of any gender and families of any makeup. Particularly encouraging was the presence of Kevin McSpadden, the Director of Marketing at Facebook, and a fellow gay dad. Not only are these companies innovative in their technology, but in their appreciation of the balance between work and family life, regardless of what that family looks like.
.

As always, the best part of the weekend was being face-to-face with so many of the friends I’ve made through the www. One such interaction was a long-overdue heart-to-heart with Bill Peebles, who waxes deep and wistfully at ihopeiwinatoaster. And then to have Charlie Capen join our conversation was all kinds of wonderful and sweet. If all you knew were the blogs of these two men, you’d think they had next-to-nothing in common. Charlie (along with his cohort, Andy) compares babies to zombies, and examines the wacky sleep positions of newborns; he lives and breathes social media, and is versed in all things Hollywood. Bill gets sentimental about an old, green ball in his yard, and is content to live in the relative reclusiveness of the heartland. Yet they both love and feel and write from their souls about their boys (they each have 2). They both have epically manly beards. And they’re both actors! You can find Charlie on IMDB.com (as well as a few commercials), but did you know Bill was once a callback away from being the Marlboro Man?!

On top of that, they are two of the strongest influences on the way I write and how I present myself and my work to the public. I’m lucky to call both these gentle men my friends. 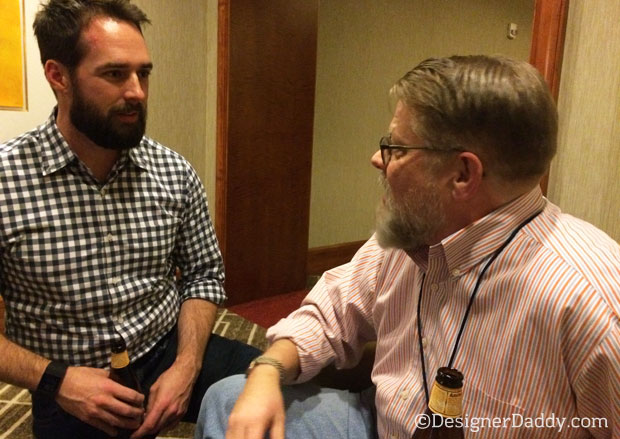 Meeting of the minds and hearts.

I had the pleasure of being on a panel with the aforementioned Charlie, as well as PR powerhouse Jim Lin, and the amazingly entrepreneurial Roo Ciambrello. Our packed-to-the-gills session was titled “Everything Is Negotiable… Until It Isn’t.” We shared our experiences on how to value yourself when working with brands, and how money isn’t the only factor. As was the theme for me throughout the conference, relationships and community trump pretty much everything. 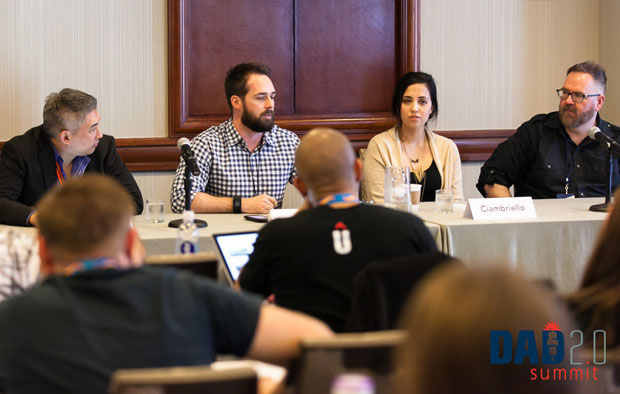 Charlie and Roo are saying something profound. Jim and I have had a couple of drinks, so we just watch.

And you may know Jason Kravitz from one of the bazillion roles he’s played on TV and in movies, but lately he’s been storming the web as part of Lords of the Playground. At Dad 2.0, he served as Interviewer Supreme, talking to a bunch of us attendees in the Esquire Live Lounge. Jason and I chatted for a bit (watch below), and in the off-camera banter discovered he hails from my hood in Montgomery County, MD. We know several of the same theater folk, and looked forward to connecting at next year’s conference.*
.

The best “off campus” activity by far was our tour of the LucasFilm offices, sponsored by LEGO. Yes, that’s right — STAR WARS. LEGO. PRIVATE TOUR. We oohed and aahed at memorabilia displayed throughout the offices (Han’s blaster. The chalice from The Last Crusade. R2-D2.), and were treated to a super secret screening of LEGO Star Wars: Droid Tales — an upcoming series on Disney XD; plus a few other goodies, both in visual and toy form. 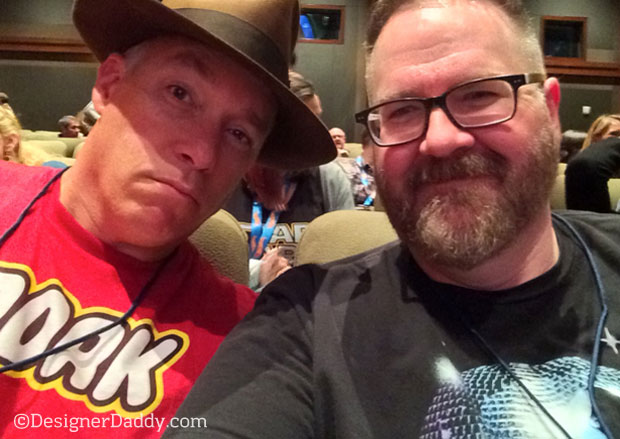 A few weeks before the conference, Dad 2.0 co-founder Doug French said he wanted to run something by me. Months earlier, I had shared some thoughts I had on ways to honor our friend Oren Miller, but they were contingent on him being there in person. When it was apparent Oren wasn’t well enough to travel, I was at a bit of a loss. Yet Doug, fellow co-founder John Paccini, and others had been brainstorming, and presented a brilliant plan to name the recently created Dad 2.0 Summit scholarship fund after Oren. The fund had been set up after last year’s Summit, and with contributions from just a handful of attendees, was enabling six dads to attend who otherwise couldn’t have afforded it. Oren’s vision for the Dad Bloggers Facebook group he started was about forming community and giving everyone an equal chance to be heard, so I could think of no better way to honor him.

I connected Doug with Oren’s wife, Beth, so they could coordinate a time between Oren’s chemo sessions to share with him about the scholarship. Oren was of course humbled and grateful — but his chemo had taken such a toll on his appearance, he didn’t want to record a video message to play at the conference. And as was more his style anyway, he wanted to write something. He asked me to read it in his absence.

The plan was to keep the announcement under wraps. Doug and John would reveal the naming of the scholarship Friday afternoon, then I would read Oren’s message. I was equal parts excited and nervous. Excited to experience everyone’s reaction, nervous to share these heartfelt words from my dying friend.

Below is a video of me reading Oren’s message, which I sent to him and Beth immediately after.

Watching this again, I’m still amazed at the hopefulness and encouragement in his voice. 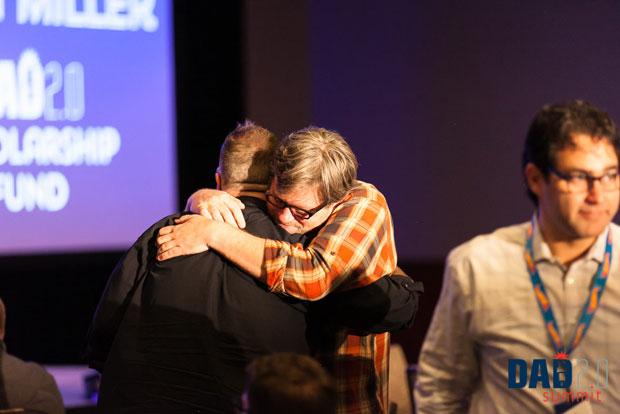 Two days after I returned home from San Francisco, Beth called to say Oren had taken a turn for the worse. Eight days after I read his message at the conference, Oren was gone.

It’s taken me exactly a month since reading Oren’s words to share my own about the conference. It seems like a lifetime ago — and in fact, it was. This conference, the men and women who attended, and the death of my friend, will be inexorably connected in my memory. As they should be. We all need to be, and stay, connected. A few more of Oren’s words, to wrap up.

PS: The sweetest part about going away was coming home, renewed and recommitted to being the best dad to this guy I can be. 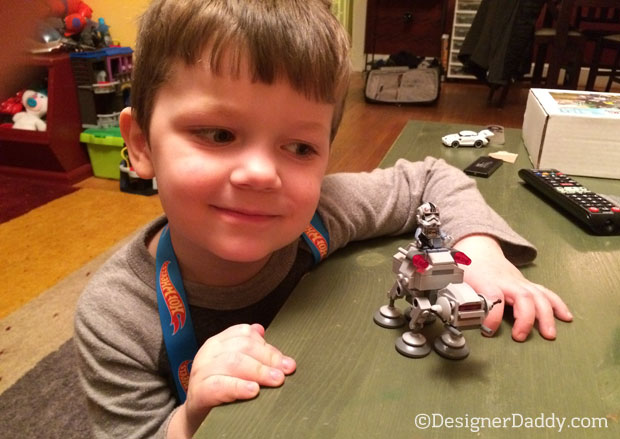