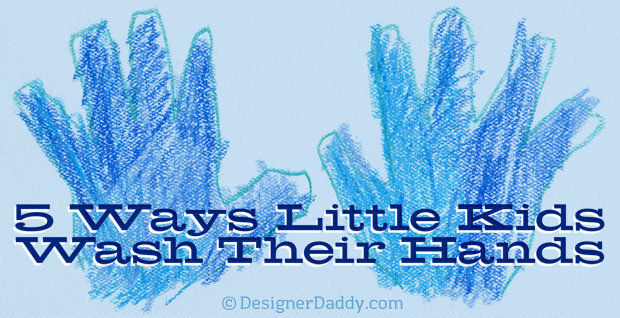 They don’t call this the dead of winter for nothing. Bitter cold. No sunshine. Cooped-up kids tearing the house apart as you slowly tear out your hair. No new episodes of The Walking Dead  for nearly a month.

And the sickness – the never ending cycle of sickness.

Mid-winter is always rough for families with kids, and this year has been particularly infectious. Aside from getting a flu shot, the most effective way to prevent illness is to wash your hands. Every doctor, childcare professional, teacher, parent, and educational Muppet has been drilling this into your kids’ heads since birth. And yet, based on personal experience of how regularly my child practices responsible (unassisted) hygiene, it’s a wonder we’re not in the midst of a full-blown toddler zombie apocalypse. Here are five reasons why…

Emergency stop at a gas station bathroom.
Washing Method:
Touches every surface he can reach during the toilet-using process. Plays with gum stuck to stall door. Picks up lollipop he set on the empty toilet paper dispenser while peeing, puts back in mouth. Removes lollipop, places on edge of sink while trying to wash hands. Can’t quite reach the faucet, so stands on his tiptoes, accidentally putting his mouth on sink. You pick him up to help him reach the faucet only to find out the water doesn’t work (or comes out non-water colored). This, after your child has already covered his hands with sticky, pink soap (which of course he could reach). Hand drier is broken. No paper towels or toilet paper anywhere. Only option is a cloth towel dispenser from the late 70s that looks like it was most recently used by a serial killer. Buy bottled water, pour it over his hands, air dry out the window as you haul ass out of there.
. . . . . . . . . . . . . . . . . . . . . . . . . . . . . . .

.
Are any of these scenarios familiar to you? If you’ve ever been a parent, they should be. If they’re not, you’re a lying zombie sympathizer. And if you’re planning on becoming a parent, you should probably start saving up for a HAZMAT suit.

Feel free to share your own hygiene horror stories in the comments. As the old saying goes, contamination loves company.

After you’ve thoroughly washed your hands with soap and water, stop by the Designer Daddy page on Facebook for even more tales of parental wit, wonder and woe.