Big Hero 6 Review: A Big Hit with the Whole Family

To cap off a truly epic 5th birthday weekend for our little (sorry, BIG) guy, we put down the LEGO sets and headed out to see Big Hero 6 as a family. This had been in place for several months — long before we’d planned the birthday party or bought presents or spent way too much time stuffing the hero-themed goody bags.

On a previous family movie outing, we’d seen the trailer for a new film we knew nothing about called Big Hero 6. Yet by the end of the preview we were all hooked. Disney + Marvel + superheroes + martial arts + huggable robots = DUH. And then it said it was coming out November 7 — OUR SON’S BIRTHDAY. We made plans then and there to be back opening day.

Since the characters and story were new to us, I had fun doing some “research” and then “educating” Jon in preparation for the birthday viewing. We had a blast on the film’s web site, which included character profiles, video clips and a couple of cool games. I even bought a picture book to read at bedtime. Disney — ever the marketing masters — already had quite a few books (for all ages) available prior to the movie’s release.

And it probably comes as no surprise that I made lunch notes of all the characters. But okay, enough set up — what did we think of the movie? 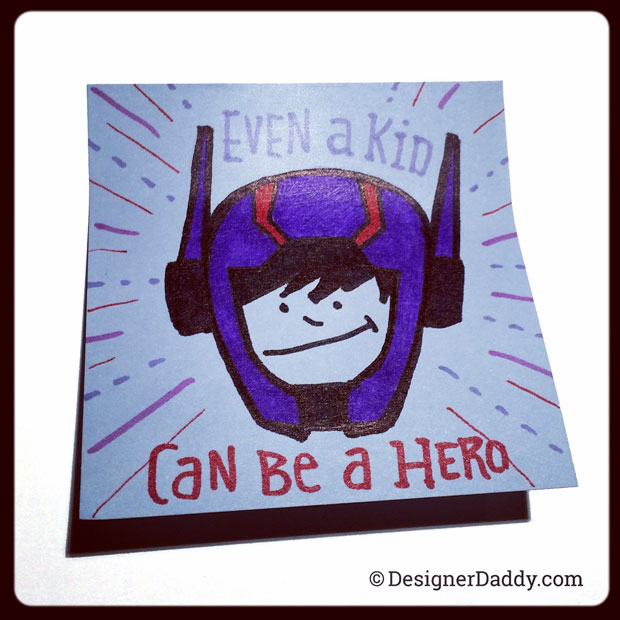 First off, there’s an animated short in between the trailers and the feature film. Feast had a lovely hand-drawn feel to its animation, and was a cute story — all sorts of sentimental. However, Papa and I discussed it afterwards and were both distracted by how much and what kinds of food the dog in the story was fed. Piles upon piles of table scraps should have given pause (paws!) to any conscientious dog owner. Those of you that saw it, what did you think?

HERE’S THE ACTUAL REVIEW…FINALLY
As the first collaboration between Disney Animation and Marvel Studios, there were very high expectations for Big Hero 6. Throw in the fact that these characters were unknown to the vast majority of the world, and that the last Disney Animation film was the highest-grossing of all time — there was a LOT to live up to.

Whether it’s the frozen past, under the sea or lost in space, Disney has always done a great job of transporting viewers into a brand new experience, while still remaining comfortingly familiar. Set in the futuristic mash-up city of San Fransokyo, BH6 quickly sets up the story and introduces us to all the players.

Hiro Hamada is our central protagonist, a 14-year-old underground robot fighter, living with his older brother and aunt (yes, the parents are “gone” — some Disney tropes will never go away). Big bro Tadashi introduces Hiro to his buddies at the science/tech lab where they all go to school, in hopes of inspiring Hiro to give up his trouble-making ways. Tadashi has also created a squeaky/sweet robot named Baymax to watch over his younger sibling — you’ve probably seen Baymax all over the trailers, and he’s probably already your kid’s favorite. 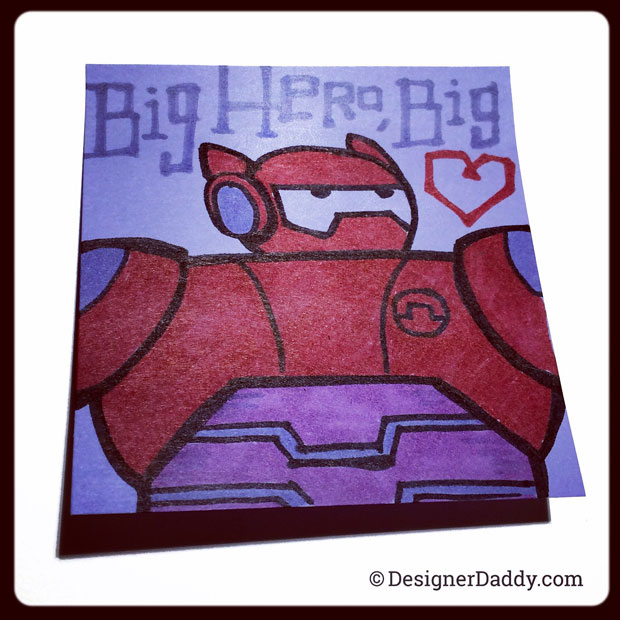 I won’t delve too far into the details of the story, but the broad strokes are that all of the science whiz-kids become superheroes and battle a super-baddie threatening their city, with millions of tiny robot minions at his bidding. The storytelling is top-notch, giving time to the scenes that need it, yet never falling into that dreaded “boring” zone that ensnares so many young viewers (like the one we brought).

The effects, the colors, the costumes and powers each team-member demonstrates — all incredible. And you can’t have a movie set in San Fran without an epic chase through its hilly streets and over the top of the Golden Gate Bridge! 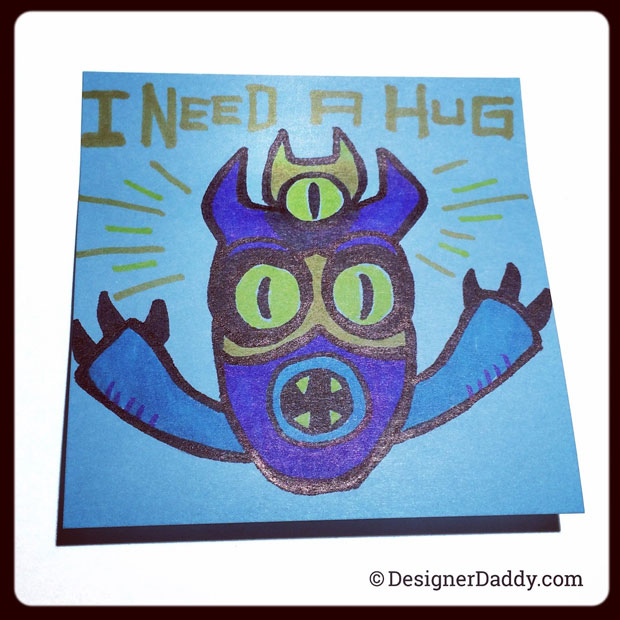 The film is rated PG, which is a bit puzzling to me. The official statement I found says, “Rated PG for action and peril, some rude humor, and thematic elements.” I didn’t find it any more rude than Olaf continuously talking about his butt. And action and peril are pretty much par for the course. In any event, our 5-year-old didn’t seem scared in the slightest, though he’s already watched quite a lot of Power Rangers oeuvre. But seriously, the villain in BH6 is similarly spooky to Ursula, Maleficent or Snow White’s witchy stepmom.

There is a key death in the story that sets off the creation of the super team, but if your child has weathered any other Disney movie ever, they should be okay. 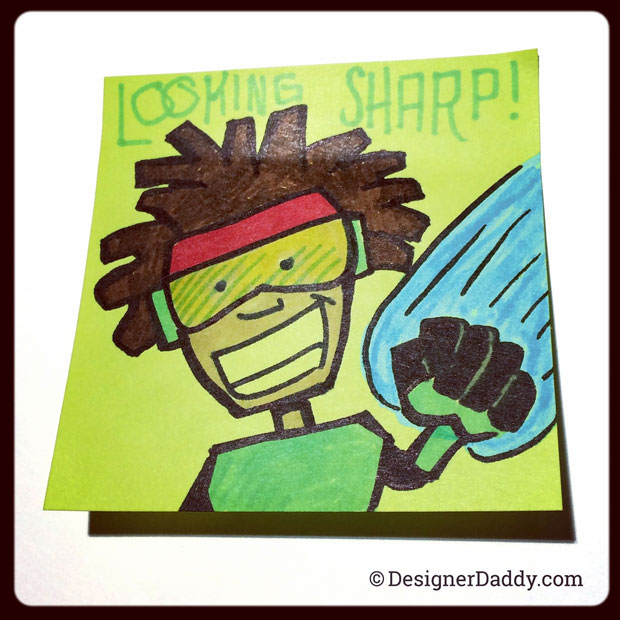 We waited around during the credits because a) Disney always has fun ending credit animation and B) Marvel always has a little teaser at the end. Our son, on the other hand, took the opportunity to run down to the front of the theater, between the front row of seats and the screen, and dance and run to the beat of the music. I thinking he liked it.

As we walked back to the car, Papa, Jon and I discovered we all had different favorite characters (Baymax, Wasabi and Go Go, respectively). The martial arts were also a huge hit — that added quite a bit of dazzle to the action, and was a nice change of pace from the constant THINGS BLOWING UP of recent live-action superhero films. The diversity amongst the team was also great. While the characters in the comics are all Asian, Wasabi (an expert in laser technology) is African-American for the film, voiced by Damon Wayans Jr. And the team sports TWO females — the tomboyish tech-whiz Go Go Tamago and the quirky Honey Lemon, a master of the elements who pulls super-powered concoctions from her purse. 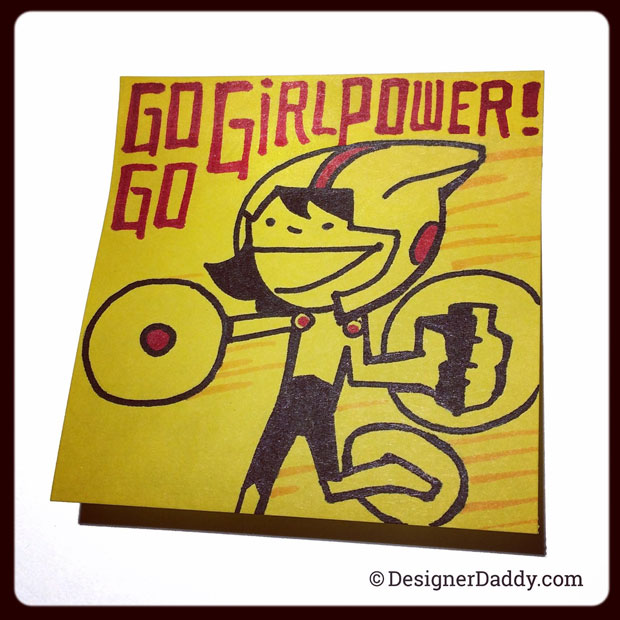 However, my favorite thing about the film is that it celebrates nerds. The team members attend a science school, and show such passion for each of their individual fields of study — all of which inform what powers they end up wielding to fight the bad guy. A big theme of the film was a celebration of learning and brain-power, which I found very inventive and refreshing. 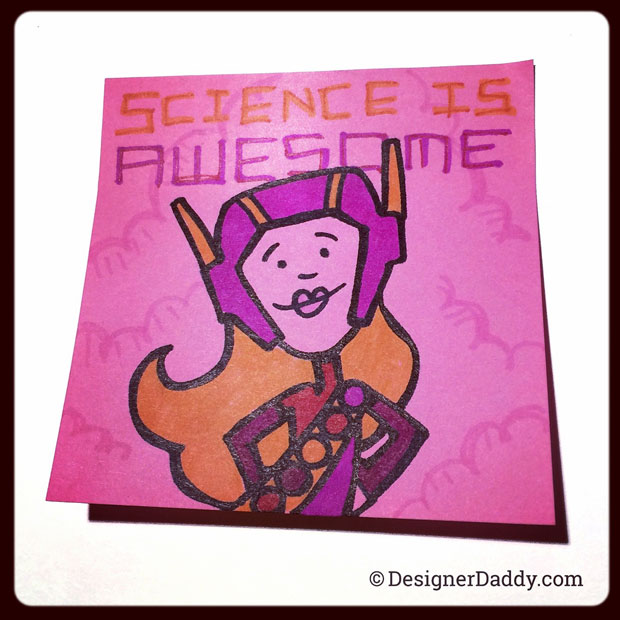 When I asked Jon what his favorite part was, he replied “When they put the bad guy in jail!” Yes, that was pretty much the end of the film — I’m sure his answer will change during the inevitable repeat viewings, or once his long-term memory develops a bit more.

But we all agreed that it was AWESOME… and that we can’t wait for the sequel. We give Big Hero 6 SIX BIG THUMBS UP.

I also wrote an article for Fandango about Big Hero 6, and about the lunch notes in general. Please go check it out!