I don’t know who first said it, but I heard my father weave it into countless sermons when I was growing up: “No one ever said on their deathbed, ‘I wish I’d worked more,'”

The same struggle often plagues me when I’m busy chronicling my parental journey on this site. That’s not to say there aren’t some positive things to be gained from all the e-yammering I do. From time-to-time I’ll hear from a reader that something I’ve written resonated with them. Or an experience I shared was sweet or hilarious or inspiring. Interactions like those are precious to me, and keep me keeping at it. Yet I also know our family is as struggling and imperfect as anyone else out there not publishing sweet, hilarious, inspiring stories about their kids.

I’ve also heard more than a few times, “Your son will really appreciate reading all of this when he’s older.”

Maybe. Or he might be embarrassed and pissed off. He’ll most definitely think it’s lame — at least for a couple of years between learning to read and adulthood.

As with many (all?) modern parents, I get too wrapped up in not only chronicling, but also planning, prioritizing, scheduling, worrying about and second-guessing any and everything related to being a parent. And as with many modern parents, I risk missing out on the most important: being present.

I’m not talking about being around. I can spend 10 times the amount of hours with Jon as my husband does, but when Papa takes a few minutes to let him help water the lawn, or shows him how to play a game on the iPad, or calls Nonna with him, it can have more impact than an entire afternoon or running around doing errands or birthday parties or play dates or clothes shopping.

I’m not sure why it is — perhaps the onset of cooler weather or the start of my fifth year as a dad — but I’ve been more conscious of taking time to actually be with my son. To watch what he’s watching, to play what he’s playing, to interact and not just oversee. Starting dinner or banging out a few sentences or sketching a logo can wait a few minutes more.

One recent weekend we’d taken Jon to the movies, and after being cooped up in the dark for several hours, he ran straight to the backyard get his ya-yas out. Papa had gone out with him initially, but then I heard son and dog romping and yelping and having a good time, so I got up from the computer to watch from the kitchen door. I laughed and smiled as they chased each other and barked and hollered.

And then I stopped watching, walked through the door and got down on the ground with them. My little boy was enjoying himself with abandon, rolling around on the grass, pretending to be shot or swimming in lava or something equally perilous. He rolled my way and I saw his bright green shirt set against the still green grass, and then the sparkle of his blue eyes set something off in my heart. I was momentarily stilled with astonishment at how breathtakingly beautiful my son was. So I did exactly what the moment called for — I tickled him. This set off his eyes and his smile and the green and the blue even more. I kept tickling until I could get my phone out and snap a quick photo to capture just a sliver of the joy of the moment. Then I went back to being present and tickling and watching his eyes and his smile, and his green and his blue spin my world around and around and around. 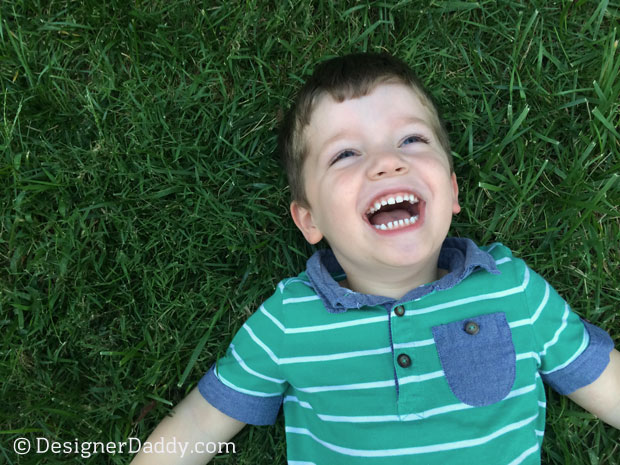 After you’ve spent some quality time with your kids, come hang out and like Designer Daddy’s Facebook page. No tickling, I promise!

2 responses to “Being Present”