I was coming off a four-day stint of flying solo while Papa was away at a conference, and not feeling too confident about my parenting skills. In fact, I was feeling downright shitty about them. Wallowing in self-doubt, self-pity, and other self-related things that suck, I walked by a drawing Jon had done earlier in the day.

The forecast for Saturday had been for a day full of rain, so we had a couple of preschool classmates and their dad over for the afternoon. Sometime in-between watching videos and the MMA match that signaled the end of the play date, the kids had pulled out the crayons and a Star Wars notepad I’d gotten Jon from the dollar bin at Target, and were cranking out quite a few masterpieces.

As I noticed the drawing again that evening, I added to the mental list of my shortcomings, “kid can’t draw.” I wasn’t upset with him or the quality of his artwork. Instead, I took it as evidence of an inability to transfer my skill set to my son. And I was jealous that the other boy that was here was a better artist, and that this was something Jon and I didn’t have that in common. All this landed atop the pile of misery I’d already put on my tired, beaten-down shoulders.

A couple of hours later I was taking a final pass through the kitchen — giving the dog her treat and shooing her upstairs, setting the timer on the dishwasher, grabbing a bottle of water from the fridge — I noticed the drawing one last time, but this time really saw it. And I realized what an asshole I was being.

Yes, Jon is just shy of 5 years old, and is a handful by anyone’s measure. He’s often defiant. Never sits in his chair at dinner. Likes to eat about only five things. He’s demanding. Cries at the drop of a hat when he doesn’t get his way. Always wants one more, one better, one bigger. And no, he’s not a great artist, and may never be.

But as I looked at his drawing, I heard him describing it (in his outside voice) to his friends earlier that day. “This is my Dad dressed as Aquaman. Aquaman is his favorite superhero!” 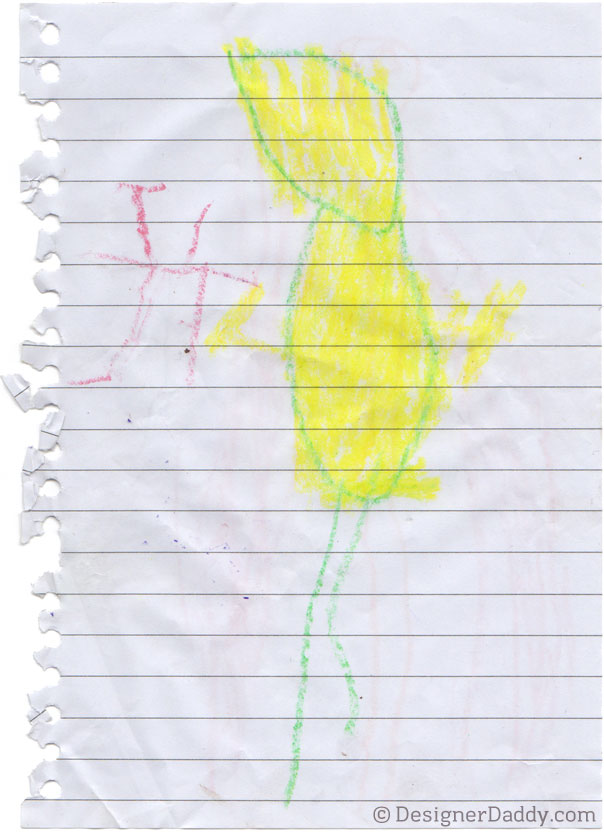 One thing I will never doubt is that I’ve successfully passed down my love of superheroes to my son. And he’s never hesitant to let everyone know Aquaman is his Daddy’s favorite hero, even though it isn’t his. And after several stormy days together, he chose to let the tumult slide, focused entirely on the fun of the moment (damn, kids are good at that, aren’t they?) and drew his fatally flawed Dad as a superhero. And not just any hero. Not his favorite hero. Mine.

Maybe it’s silly and insignificant and only accidentally thoughtful. Maybe it’s just an odd, throwaway doodle of an armless lemon man. Or maybe it’s the one thing keeping me from going to bed tonight feeling completely defeated. Maybe it’s a subconscious message from my son to me that he knows I’m trying my hardest. That I may not be the strongest or fastest or most popular superhero in the world, but to him I’m still a hero, and that he has hope in me… even when I don’t.

That’s how I’m taking it. It was a ray of hope glistening on a sea of frustration, and I’m soaking it up for all it’s worth. The drawing is now taped to my desk so I can see it every day. It’s there to remind me to be the best hero I can be. It’s there to remind me my son sees me and has hope for me. And that gives me a little more hope for myself.