Let’s see… we’ve covered miraculous growth spurts, accelerated maturity, and avoidance tactics. Now we come to the I WANT EVERYTHING portion of this series. 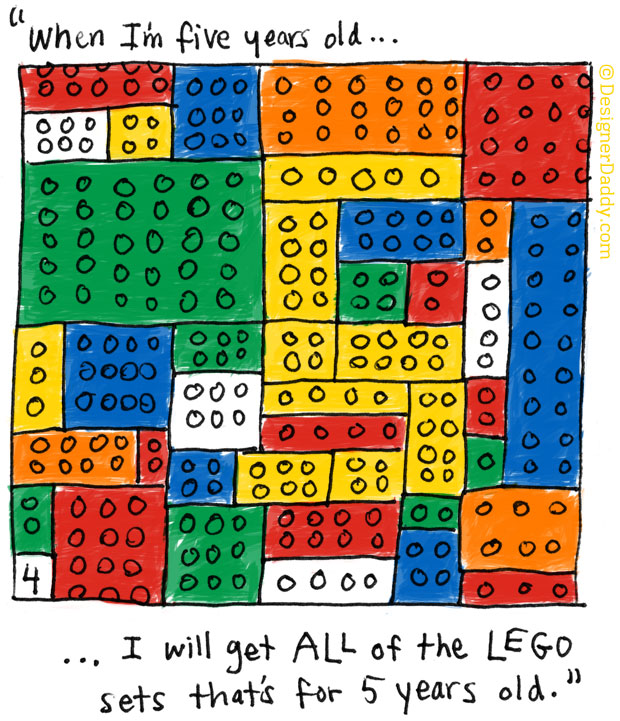 You’ve got to hand it to LEGO. They were a pretty popular toy when I was a kid, but nothing to lose your mind over. Yet somewhere along the way, they went from being huge piles of plastic bricks you made stuff from to elaborate kits with bazillions of teeny, tiny pieces branded to every pop culture property you can imagine. Okay, there were kits back in the olden days, too — but not like they have now. And my son (and nearly every other boy I know, and quite a few girls) are ravenous for them.

We’re at a point right now where Jon’s fingers and dexterity are still not quite developed enough to put together the bazillions of teeny, tiny pieces on his own. Combine that with my too-large fingers and too-old eyes, and building LEGO sets are not my favorite father/son activity.

And never mind how OCD I get thinking about all of these kits and their bazillions of teeny, tiny pieces being assembled once, played with a few times, falling apart piece-by-piece, and eventually ending up all mixed together in the same box… never to be re-assembled the same way again. AUGH! I’m all for free-form creativity, but if we’re gonna shell out the bucks for the kit, and go through the trouble to configure these things, can’t we just dip them in hot glue, throw them on a shelf and call it a day?

Alas, no. That isn’t the way it works. And by “it,” I mean the mind of an almost-5-year-old. Or perhaps the sinister machinations of the LEGO necromancers. Either way, I don’t stand a chance.
.

Check out all the other installments of “When I’m Five Years Old…” and share your own child’s aspirations in the comments.