It’s no secret that the struggle with our 4-year-old and food has been long, frustrating and fraught with many, many carbs. As with a lot of kids his age, tastes change as frequently as the Power Rangers’ uniforms. Sometimes it’s Banana Week, other times Apple Week. But it’s almost nearly never an Anything Green Week — which is surprising since green has been his favorite color since he could tell us so.

Yet as we near his fifth birthday, in addition to the personal goals, the promises are starting to pile on as well. Thanks to a book we recently read, Jon now knows that broccoli gives you gas, which elicited the expected glee (and gas). Seeing an opportunity to encourage some veggie digestion, I played up how fun it would be to eat broccoli and all the smelly farts he would have. Being my well-trained son, he of course took it to the next level, proclaiming… 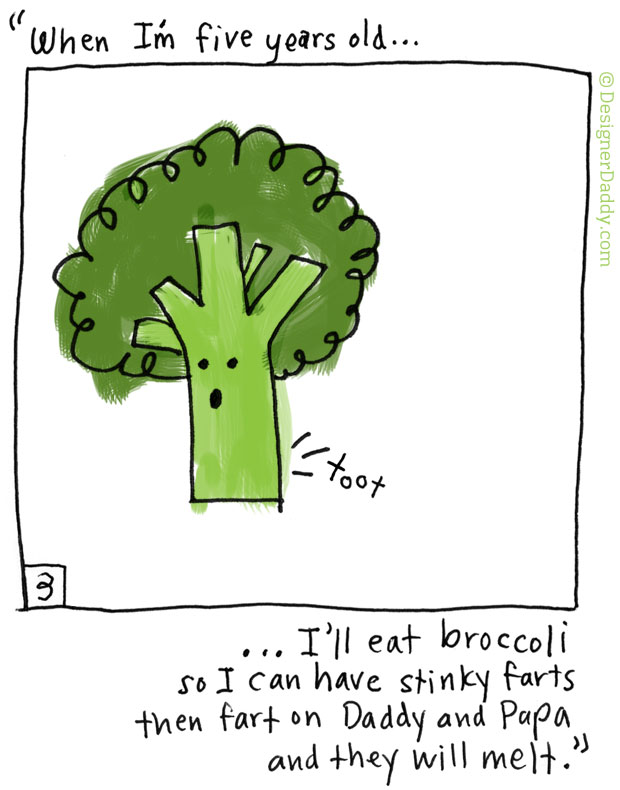 As long as he’s eating healthy, I suppose I can wear a gas mask during dinner. But I’m not holding my breath.

Check out all the other installments of “When I’m Five Years Old…” and share your own child’s aspirations in the comments!

For more delicious fun (and the occasional fart joke), trot over to Facebook and like the Designer Daddy page!