A viewing of The Incredibles (while wearing his Dash underwear, natch) — in addition to our 4 year-old’s default setting — put Speed Week into high gear.
. 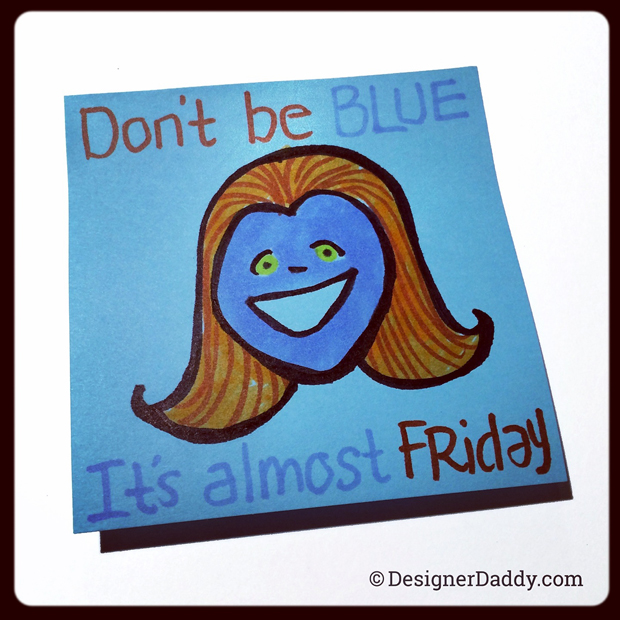 Lest you think I’m not portraying positive images of women for my son — as with many preschool-aged superhero fans, there’s nothing cooler than a great bad guy. Same goes for a powerful, smart (and okay, evil) bad GIRL.

Papa and I had just seen X-Men: Days of Future Past, where Mystique plays an integral part. Great movie, but am I the only one who prefers Rebecca Romijn’s badass/cool version to Jennifer Lawrence’s badass-whiny version of the character? Either way, Jon’s got a few years before he weighs in on this timeless debate.

Knowing these heroes should be part of the U.S. naturalization test. We had a super spectacular 4th, including lots of patriotic lessons at preschool and running into school friends a local park where we went to watch fireworks.
. 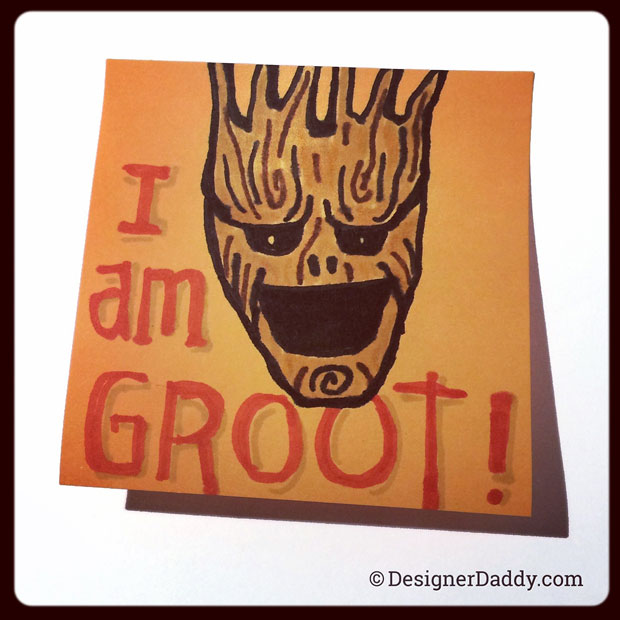 Another cool cartoon we’ve discovered is Avengers Assemble. In one episode the Avengers team up with The Guardians of the Galaxy to battle Galactus, Devourer of Worlds (and also pizza). Two giant birds killed with one stone.

The Guardians of the Galaxy film didn’t come out in theaters for a couple more weeks. But Groot is also making his debut here because I’d received some awesome swag from Hasbro that has been secreted away (for the most part) until Jon’s birthday and Christmas. 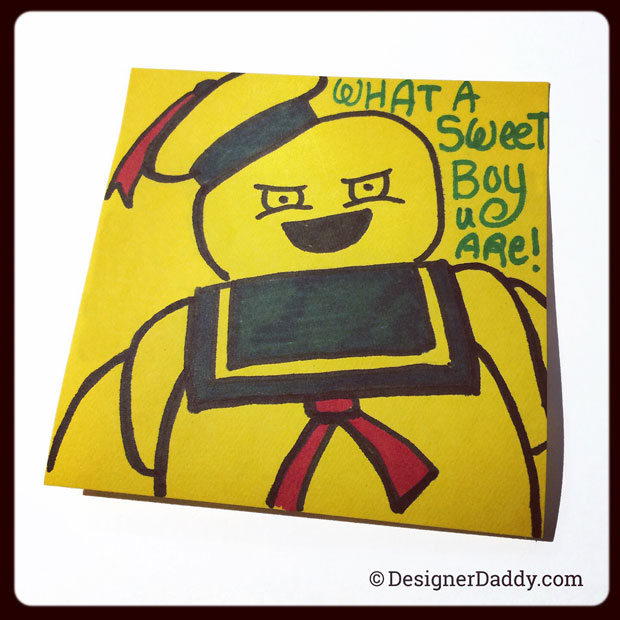 As the tone of the first and last notes indicates, the week started off rough and smoothed out a bit as we finished up. These are always a great way to get in a little subliminal parenting. 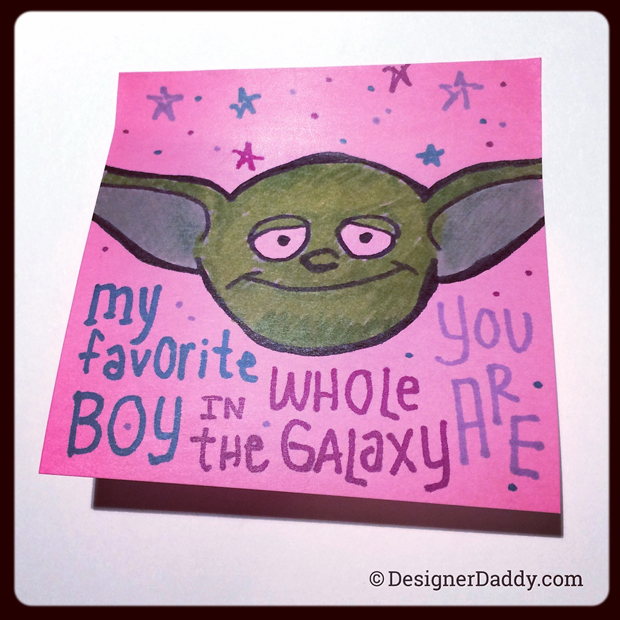 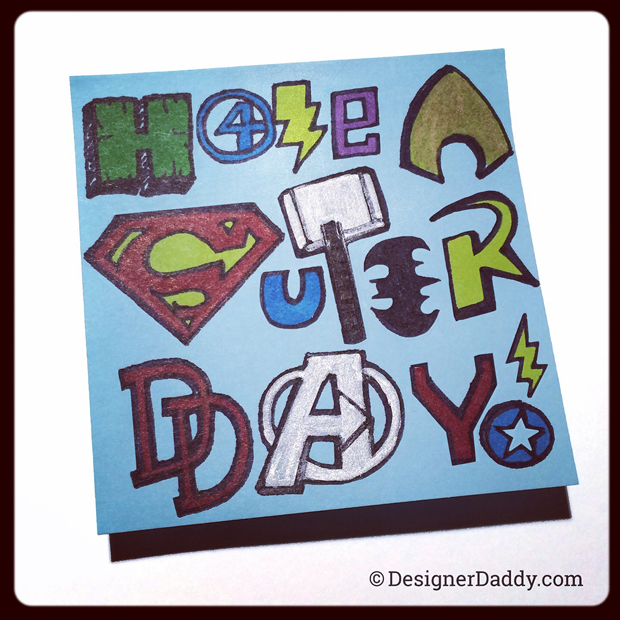 I used the advent of Superhero Day at preschool to do my first SuperLunchNotes contest. The person who guessed the most correct hero symbols got to request a future note. Right out of the gate, I got a lot of great guesses on both Instagram and Facebook. The one that stumped everyone was the “Y” from Young Justice. By the way, Jon got all but 3.
.

Jon’s favorite Ghostbuster (and top contender for Halloween costume); Jon’s favorite Muppet; the discovery of the Spy Kids movies on Netflix; one of my favorite SuperLunchNote puns… and admonition to my son to eat the banana I packed for his lunch. 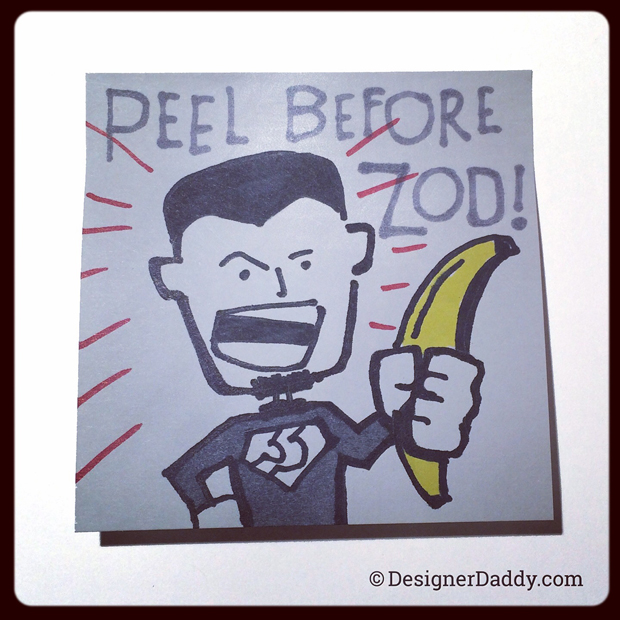 This was also the week Robin Williams died, so we watched Aladdin and I did an note in Williams’ honor. It got the most likes on Instagram than any other I’ve done — by far. His will be missed.
. 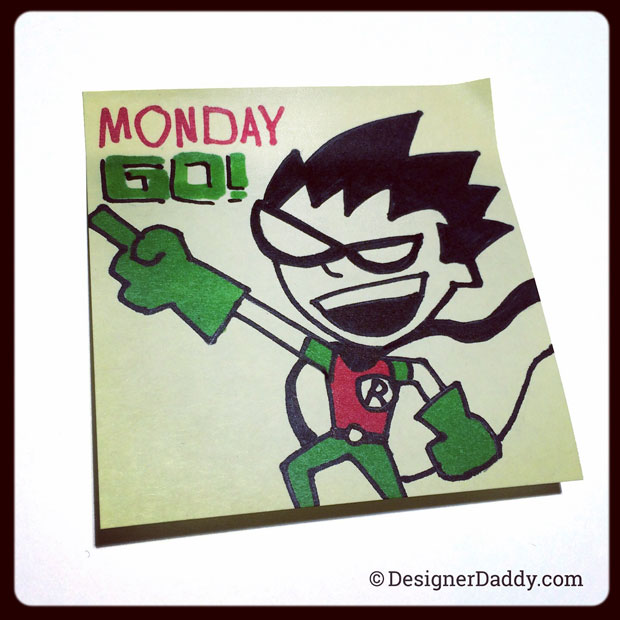 My first contest winner (photographer Matt Rose  — check out his professional site and Instagram) initially chose Black Bolt. A great character no doubt, but not one I could figure out how to introduce to Jon just yet. So Matt graciously gave me his 2nd choice, Robin. Specifically, the hyper-vigilant, anal-retentive version on Teen Titans Go! Congrats Matt!

Keep an eye out for more contests on Instagram in coming weeks and months!

Other highlights from this rare non-themed week included the cool-as-a-sea-cucumber Aqualad (also from Teen Titans Go!), Captain Hook’s hook in honor of Pirate Day at school, and Wolverine trying to nip a particularly whiny boy in the bud before heading to school.
.

I wrapped up the summer with a bunch of Jon’s favorite super pups. We had fun watching some Underdog cartoons on YouTube, but I had a heck of a time convincing Jon Goofy was a dog. It is confusing, in that he hangs out a lot with Pluto, a “real” dog. And if you’re not familiar with Chase, you clearly don’t have any young boys in your house.

I hope everyone had a great summer! Stick around for more SuperLunchNotes (including a joint post and giveaway with LunchboxDad!) as we leap into the new school year!

Hungry for more? Get your daily dose of superheroes by following SuperLunchNotes on Instagram!

One response to “SuperLunchNotes: I Know What You Doodled Last Summer”