This was today’s lunch note, in honor of Robin Williams’ passing. Jon hasn’t seen Aladdin yet, but he has an Aladdin book, so knows who the Genie is. We watched a clip of the song “You Ain’t Never Had A Friend Like Me” on YouTube this morning, and his one comment was, “He’s SO funny!” Truer words… 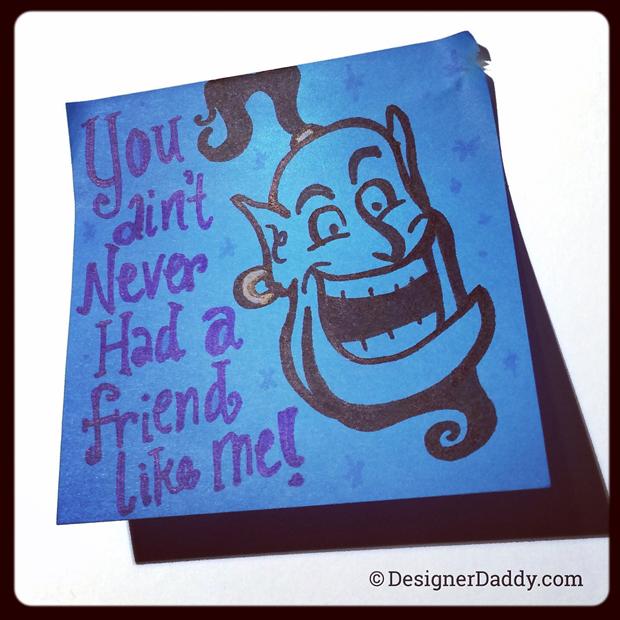 Robin Williams was known first (and most) for being a comedian — his rapid-fire delivery and over-the-top characterization knowing no bounds. Yet looking at his entire body of work, he found a way to come down from his seemingly endless zig-zag through space and make his roles relate to so many. Whether you were sailor or a fish-out-of-water; a soldier away from home or a homeless hero; an idealistic professor, a desperate divorcee or a frustrated therapist — he took us along for the ride and made us feel simultaneously at ease and on edge. Filling our hearts while never knowing what to expect next.

Not long after I came out of the closet, The Birdcage was released. Below is a clip of the most touching scene in the film:

At the time, I hadn’t yet met my husband, and gay marriage wasn’t even remotely an option yet. But as I watched (amidst a snickering audience), I knew this was what I wanted for my life. And that it was possible. Williams’ and Nathan Lane’s sweet, poignant exchange — smack in the middle of a hilariously madcap movie — felt real and meaningful, brave and hopeful. For that, and for many other laughs, tears and granted wishes, I say thank you.