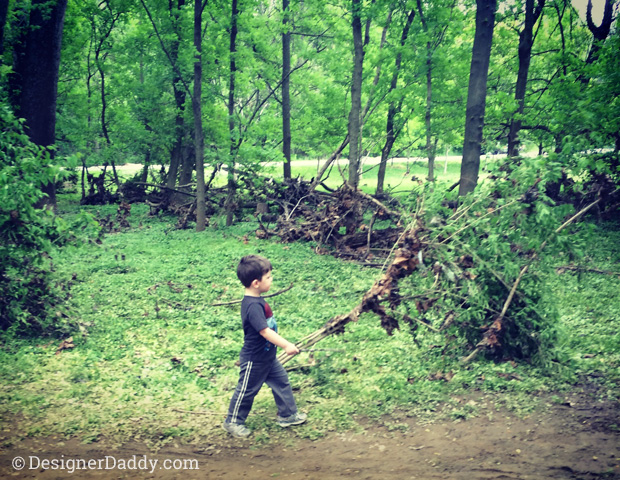 This particular food-related fit was a good reminder of what goes on inside his head — that he’s struggling against us setting boundaries, to make and find his own; to be in charge, if only for a moment. And it was a good reminder that logic doesn’t always usually play a part in his thought process.

The specifics of the meltdown are also not important… but it involved the continued smashing of a peanut butter sandwich, in case you were wondering. It also involved the smashed half sandwich being thrown away, leaving a perfectly intact half — one which my wailing child could not be convinced to eat. Because he wanted the mangled one in the garbage.

His teachers had told us that he was still struggling to grasp the concept of “if/then, as he was still deeply entrenched in the “all/now” way of thinking.

Certain he was exhausted and had no spark of energy left, I offered up a trip to the park, if only for a change of scenery and mood. I was sure I saw his eyes droop and head nod at one point during the winding drive through the woods to the park. But like a self-charging battery, he was rearing to go the minute we stepped out of the car.

After the requisite round on the merry-go, a quick trip up the rock-climbing wall and down every slide, we set off in search of our evildoer, armed only with a dirty stick and Jon’s steely resolve. We also had to find one for me.

Once we were both brandishing suitable wompers, we continued to walk — past a big, muddy puddle, pretending it was a swamp; across a dirt path covered in caterpillars; around several felled logs. I astounded my traveling companion by jumping up and catching a dried vine hanging from a tree. Breaking it in half, this enabling us both to have even longer, more whip-like wompers. While infinitely cooler than our previous weaponry, I soon had to make these shorter as they kept getting flung around and endangering the wheels of oncoming cyclists and my shins. 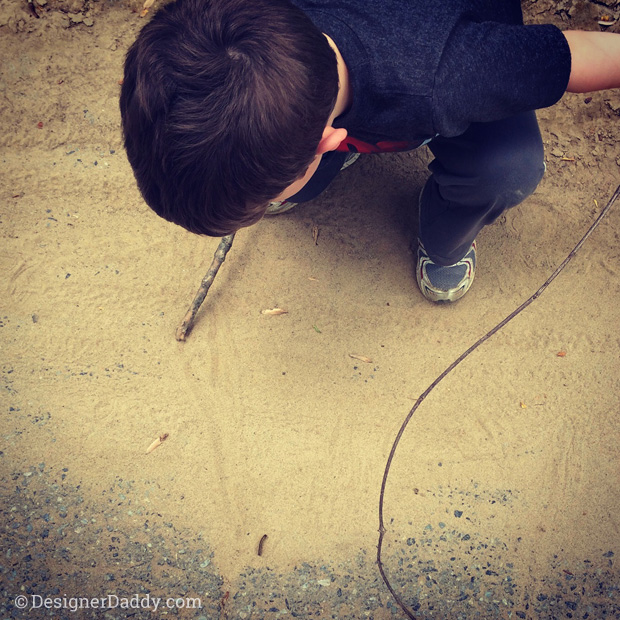 We stopped and looked up at the sky and marveled at how tall the trees were. We knelt and made a path for the caterpillars to cross through the dirt. We paused to search for a helicopter buzzing behind the forests’ canopy, which we concluded was a prehistoric mosquito.

I was thoroughly enjoying this adventure, dropping the tether altogether, willing to let it go as far as he wanted to go. As far as we could go.

But then, as we looked up ahead, and I wondered aloud if what’s-his-name was behind the bridge crossing over the creek, Jon stopped. Suddenly my heroic halfling sensed the scope of our trek, declared that we’d gone too far from the playground and that we needed to go back.

So I complied and we turned around to retrace our steps. We glanced at the worms still crossing their dirt path, threw our wompers into the woods as far as they could be flung, and trudged thru the big field of clover separating our journey from the playground. At his behest, we stopped for a few minutes to sit and dig some dandelions out of the earth, and so he could give me a flower before we raced the rest of the way to the car. 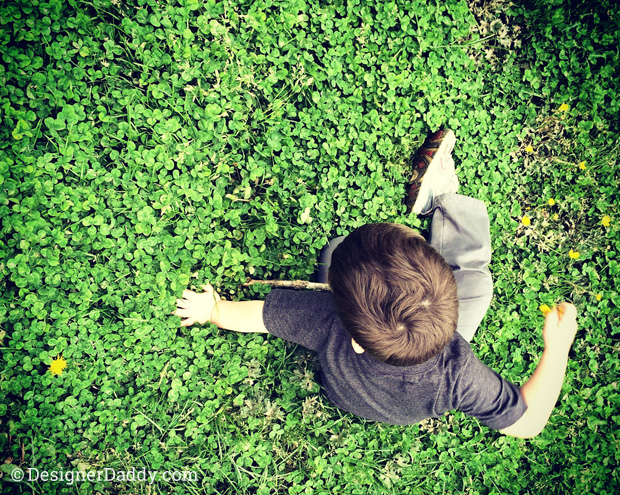 I had suggested this outing begrudgingly, hoping that it would be prevented by sleep, or fearing that it would end in tears. Instead it entailed a few minutes of freedom — freedom for my son from the rules and limitations of his very tall, strict world; and freedom for me from the stress of being so tall and so strict.

And though it’s not vital to this tale, we never did catch the bad guy. He’s still out there, lying in wait for a brave, wandering pair to discover him… in case you were wondering. 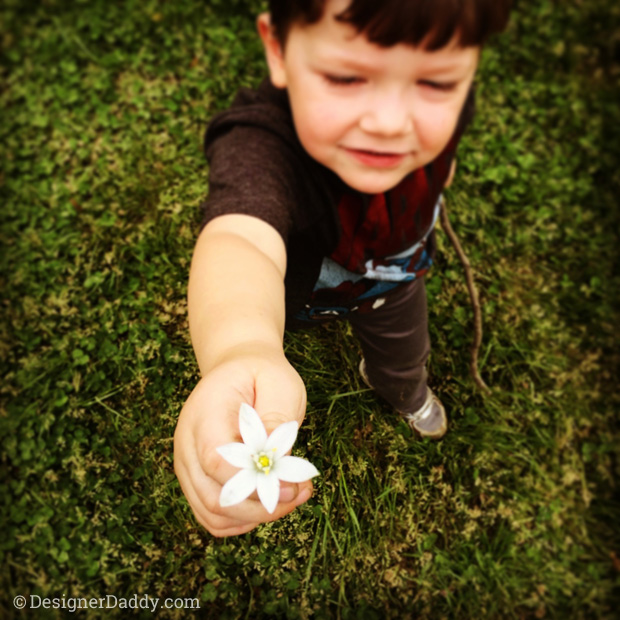 10 responses to “A Boy, A Stick & A Walk in the Woods: Setting Boundaries & Letting Them Go”