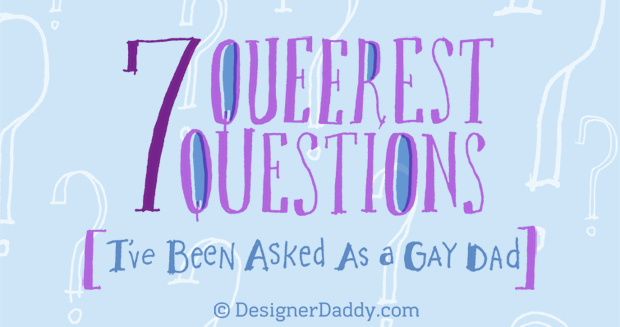 I always imagined myself as a father, but I never imagined being asked questions quite like these.

Perhaps you’re wondering why I went with queerest questions — other than the obvious alliteration and overall cleverness, that is. Because while some of the questions are offensive, some are annoying, and some are downright stupid, they’re not all offensive, annoying or stupid. But they are all queer — as in odd, strange, bizarre. Much like the entire experience of parenting.

Now, if we’re done questioning the queerness of my headline… on with the questions!

.
1. Are you breastfeeding him?

.
This was once asked in jest. And then multiple times out of curiosity as to whether we were feeding our infant breast milk or formula. For gay dads (and lactationally-challenged or adoptive moms) this involves the extra step of acquiring fresh (ish) breast milk on a regular basis. We kindly declined our birthmom’s offer. There was some concern she might bond more than she should, thus making the transition difficult. There was also trepidation about her medical history — questions without clear answers. We had a local friend volunteer to pump for us or put us in touch with a “milk share” group. And yes, we asked a pediatrician…a few of them. And they all said there weren’t significant health differences, but that we should pick one way and stick with it. So due to all of the above, and not being back in our home state with our son until he was 2 weeks old, and the overall convenience of it, we opted for formula. That’s the long answer.

The short answer? We tried, but he kept getting hair in his mouth.
.

2. Which one of you does he belong to?

.
Asked by a nosy, well-meaning cashier at our local Baby Box Store.

“Both of us!” I said cheerily.

The takeaway? We may not look related, but we are awesome. And also adorable.
.

.
I’ve been asked this question more than any other on the list. Though it’s usually couched in a more open-minded voice: “Does one of you take on more of the traditional ‘mothering’ role?” However you present it, what’s being asked is if we are able to reconfigure ourselves into a traditional family structure.

Included here are the numerous Internet trolls who’ve asked if I’m aware I deprive my child of the required male and female parents. Or the woman who asked which one of us provided the egg and which one carried the baby. Or the many who are bothered by a lack of female influence.

While the motivations may be different, the questions all make the same assumption – that every child needs a father and a mother in order to be healthy and happy.

No. Every child needs feeding and nurturing; to be taught how to read, sing and dance; to be caring towards animals and other people. Every child needs to be protected, fed and clothed; to be exposed to nature and adventure; shown how to be confident in who they are. While those attributes may fit neatly into gender boxes for those encumbered by history, same sex parents (and an increasing number of heterosexuals) enjoy a fluidity in their parental duties not limited to their anatomy.

Between the two of us, Papa and I manage to cover all the things I listed. Sure, I do some more than he, and vice versa — but it’s based on our talents and personalities. When there are no restrictions on who does what, you’re not left with an imbalanced and incomplete child, but one who’s (fingers crossed) well rounded, fully complete and open to all the opportunities life brings their way.
.

.
I get that this has way more to do with me having an ample midsection than it does my being gay. Yet it made the list because it was asked (by a child) with the knowledge that my son doesn’t have a mom. And since a baby’s gotta come from somebody’s tummy, our son must’ve come out of one of his dads’ bellies. And it wasn’t completely illogical to assume it was mine.

While I was able to laugh it off at the time, this kid shouldn’t be surprised if their invitation to Jon’s birthday party gets lost in the mail…
.

.
I can’t recall who asked this, because they are now dead to me.

Asking a gay dad if he’s the grandpa is akin to asking a woman if she’s pregnant. Unless she’s crowning — or he’s wearing an “I’m the grandpa” t-shirt (he won’t be) — don’t ask.

Based on a bit of informal research* (and a pretty fair societal assumption) gay men tend to have kids later in life than our hetero counterparts. So always err toward the younger role in the relation equation.
.

.
This has been asked with some regularity by the smaller subset of humanity. One particularly persistent young lady, after asking me the first question and receiving my standard “He has two dads” response, proceeded to hound me like TMZ on a Kardashian. “But he has to have a mom.” “Do you know his mom?” “Babies come from mommy tummies and you’re not a mommy.” “So where is his mom?!” “

Thankfully she was distracted by something more interesting/shiny, and I quickly made my escape.

As for the similar yet much more sinister-sounding second question, you can read more about that exchange (and my processing of it) here. Suffice it to say it was a learning experience.
.

.
We were considering a trip to Family Week in Provincetown, MA. I was describing to Jon how awesome it was going to be to meet lots of other kids who have two dads or two moms. He thought for a second, smiled, and then inquired, “Can I get a mom?” I smiled back, “Sorry buddy, those moms belong to other kids.”

This first time my son asked me if he could get a mom, it was kind of cute. It was part of a pleasant conversation and I was able to answer with the right amount of honesty and depth appropriate for his age and the situation. But good god if it didn’t tie my stomach in knots for a minute, dreading the next time he asked it. Maybe it wouldn’t be out of circumstantial curiosity, but from a place of deep longing, or feeling like an outsider, or resenting the parents he was dealt.

Yet based on my experience as a father thus far, I’m learning to not fear the questions — especially not the ones from my son. I’m confident I’ll be able to answer or discuss or research or whatever it takes to have a positive interaction with him, to tell him that I hear and understand him, and above all assure him that he’s loved.
.

.
When it comes down to it, I’d rather have all of these questions (and more) than none of them. Sometimes they’re hurtful, sometimes they’re really dumb, and on rare occasions they’re outright bigoted. But with every question, I get the opportunity to share the story of my family, and add one more person to the list of those that have met an actual, real-life, gay parent. Because knowledge, experience and personal interaction are how tolerance and lasting change come about.

That being said, if you ever want to ask a gay dad (or mom) about something that’s piqued your curiosity, keep in mind that like any parent, we’re sometimes usually in a hurry, stressed out and sleep-deprived, or have just been pooped on. If that’s the case, assume we’re like any other parent… and either hand us a wet wipe, or get out of the way and marvel at how awesome (and adorable) we are.

*My informal research: I polled a ton of dads from my various Facebook groups, got 500+ replies, then chose 100 samples each from my gay dads list and my straight parents list.

Share your queerest questions in the comments. Regardless of your parenting role, gender or orientation — if you’re a parent, I’m sure you’ve been asked something pretty damn queer.

Now I’ve got a question for YOU… Have you liked Designer Daddy on Facebook yet? If not, what’re you waiting for? (Oh crap, that was 2 questions — sorry!)