“He doesn’t have a mom… because she’s dead.” 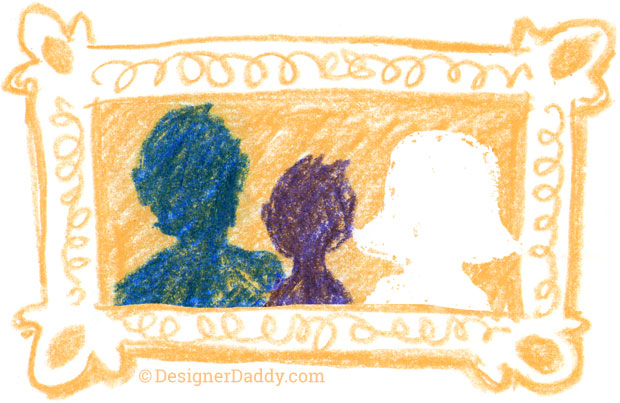 So here I was, my not-small frame perched on the teeniest of tiny wooden chairs, clad in a retina-searing-orange t-shirt emblazoned with my son’s preschool logo, waiting for the class to be corralled before we headed to the petting zoo for a field trip. All of these kids knew me as “Jon’s Daddy,” the one who picks up — as opposed to “Jon’s Papa,” the one who drops off. There are other quite noticeable differences, but I can imagine that from a 4-year old’s perspective, we’re both just gigantic, bespectacled, goateed man-parents.

Yet it still came as bit of a surprise when I overheard my son’s classmate say, “Jon, your Papa’s here!” As expected, my son quickly corrected his chum, and things seem to be right with the world.

There was a lot going on, kids hopping up and down, excited about the field trip, distracted by the several parents scattered and squatting around the room. But amidst the melee, I hear mention of “mommy” something. I turned back toward my son and his posse, and the same friend exclaimed to all who would listen, “Jon doesn’t have a mommy… because she’s dead.”

My hackles were immediately raised and my inner Daddy Bear started to growl, yet I only managed a semi-audible “No… that’s not true.”

Semi-audible because at the same moment the teacher began the pre-field trip bathroom break process, which sent the kids into an even louder buzz of activity and noise.

Jon didn’t seem to notice the remark, and I quickly got swept into the fun and responsibility of the day, so it slipped to the back of my mind. Only later, as we were riding the bus home after a long, exhausting day of animal petting did I remember the “dead mommy” comment. I wondered if my son had heard it, and how it made him feel. I wondered how many other times he’d heard this or other things from this or other kids. And I wondered what I could do to fix it. To protect him. To keep him from the feeling of “otherness” I’d worried about since before he was born.
.

WHAT I WANTED TO DO

My initial reaction was to talk to the parents. Not to scold them, but to make them aware, teach them the correct things to say and hope it trickled down. Papa was on board with that, so I figured I’d call this boy’s Mom the next afternoon.

The next morning, I presented the situation to a group of gay dads I chat with online. I did it more as a topic of conversation, out of curiosity of shared experiences — certainly not to have my mind changed. The responses were quite varied — more so than I had expected — and taking them in as a whole, I pondered a different approach.
.

WHAT I DID DO

I decided to talk to my son’s teacher. I relayed what I’d overheard (and that I didn’t think Jon seemed bothered by it), and that if it should happen again to remind the class that Jon just doesn’t have a Mommy. He has a Daddy and a Papa. Jon knows he came from another woman’s belly, but for the sake of preschool conversations and understanding, I figured simpler is better. The teacher was wonderfully accommodating, reminding me she had used the books I lent her when they talked about family earlier in the year, and that she reminds the children whenever it comes up that every family is different. She in fact was raised by just her mother, and she tells the children so.

And I decided to talk to Jon. On the ride home, I asked him what he tells kids when they ask why he doesn’t have a mom. “I have a daddy and a papa,” was his reply. I asked him if he felt okay about that, considering most of his friends have a mom and a dad. “A daddy and a papa are better than a mom!” was his fervent response. I started to correct him, but I just smiled and let it go for now. If that’s what he needs in order to feel empowered, that’s his story and I’m sticking to it.
.

My instinct was to defend and protect my cub, to nip the lies in the bud and reinforce them with truth. However, I realized that I’d been granted a rare glimpse into my child’s daily life — and that 99% of these situations will take place when I’m not around. Which TOTALLY sucks. I envision standing over this kid and booming in my best Beanstalk Giant voice “SHUT IT, BOY! I’M THE DADDY! THERE’S THE PAPA! THERE IS NO MOMMY AND THAT’S EQUALLY AS AWESOME (IF NOT MORE) THAN YOUR BORING FAMILY!” (Or maybe something more rhyme-y.)

But I’d probably get in trouble for that. Instead, I want to teach my son to defend himself. To reinforce and retell his story so he can hold it close, find comfort from it, and share it with others when it’s warranted.

I know this little boy’s comments weren’t malicious. He wasn’t teasing Jon. He was merely filling in a blank that he found confusing with something he likely saw on a superhero cartoon or in a Disney movie. Yet I know the malicious comments and teasing will come. And very likely when Daddy and Papa Bear aren’t around to bare their claws at the offenders. Until then, I’ll continue to tell our Baby Big Boy Bear his story, doing my part to ensure him a confident, secure and happily ever after.
.

WHAT WOULD YOU HAVE DONE?

Share your thoughts, reactions and your own stories in the comments. You never know who may benefit from you sharing your story.

Come join the conversation at Designer Daddy on Facebook, give us a Like and choose “Get Notifications” in the drop-down menu to ensure you don’t miss a fun and fabulous thing!