Riffing off SuperLunchNotes, and inspired by requests from friends and readers of “Will you make MY lunch?!?” this summer I’m doodling a series of notes featuring some of my favorite dad bloggers… re-imagined as superheroes. Why? Because it’s fun. And because you should be reading these guys. And because I’ve gotten so much support from my community of blogging dad pals, I wanted to toss some good karma their way. 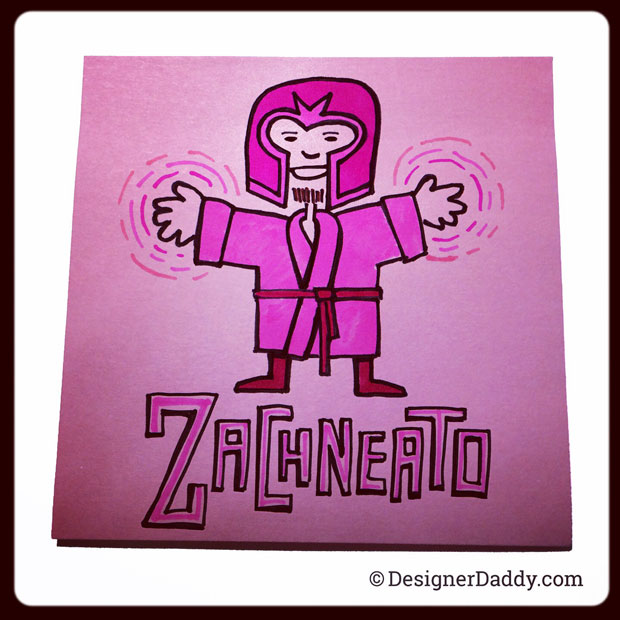 About ZACHNEATO:
Origin: When a bottle of Coke and a packet of Pop Rocks spilled onto a Ms. Pac-Man machine, ZACHNEATO emerged fully-formed, robed in pink, and ready to rule to world!
Powers: The ability to manipulate bits, bytes & blogs into anything he chooses. His hot pink robe and helmet make him impervious to Internet trolls and Twitter crashes.
Weaknesses: Without his fluffy pink armor, ZACHNEATO is susceptible to attack from his arch-nemesis, MR. A!

About ZACH ROSENBERG:
ZACH is the more vocal (and more pink) half of the blog 8BitDad. He and co-founder Bryan Ferguson have been making the blogosphere crackle with smarts and silliness since 2011(ish). They’ve got the comics/sci-fi/gamer beat covered, and do their fair share of reporting on all things fatherhood — particularly how it’s portrayed in the media. He is also a father and husband, and his favorite superhero really is Magneto. Or maybe Batman.

8BitDad 101:
• The Ugly Truths Behind Caillou, Curious George and Max & Ruby
• 25 Reasons Kids Should Be Left Alone With Their Dads (I’m at #17. This list inspired my own)
• Observations On Dad-Bias In 140 Commercials From 2013
BONUS: Their archive of hilarious video podcasts