With everything going on, I haven’t had the chance to post any SuperLunchNotes in a long while (uh, five weeks it seems). I’ve also been pondering ways to better incorporate them into the blog without boring you/me to tears. What say you, readers? Would you like a daily dose of SLNs? Or are you fine just seeing them every couple of weeks? Other ideas?

While you ponder that, let’s catch up a bit, shall we?
.

I was growing weary of the theme weeks, so I just did a week’s worth that were top of mind. Bane was on an episode of a Batman cartoon we were watching — plus he’s one of the few Imaginext figures not to have been featured on a SuperLunchNote yet. Cap and Natasha were in the commercials for Captain America: The Winter Soldier (which Jon saw several times), and also in the movie — which Papa and I saw on a too rare date night. And the Minions popped up repeatedly on the DVD of Despicable Me 2, on heavy rotation in our house.

But what about this Daniel Tiger dude? If you don’t recognize him, you probably aren’t the parent of a preschooler. He’s is the star of Daniel Tiger’s Neighborhood, an animated spin-off of Mister Rogers’ Neighborhood. I’m not going to tell you too much right now, but there will be a lot more about Daniel in an upcoming post or two… In the meantime, listen to the theme song (especially at the end of the episode) for some nostalgia-induced goosebumps. 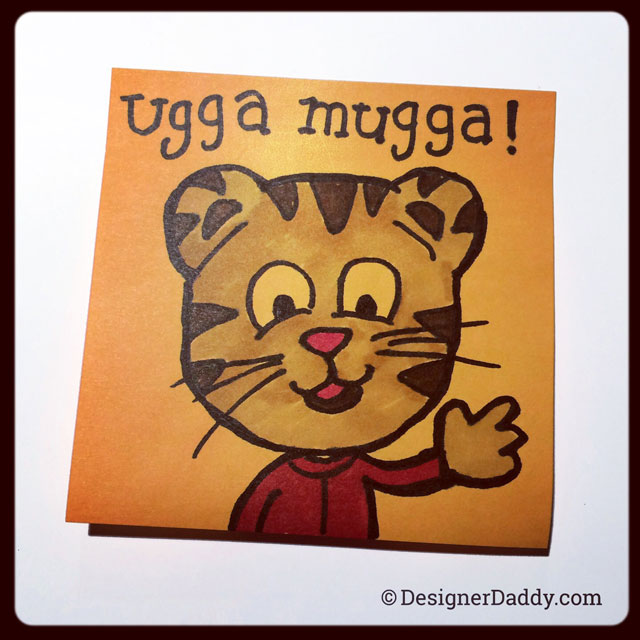 This was a short week, but I was able to fit in some fun notes. We had watched part of the original Batman movie so I was inspired to doodle Bats doing the Bat-Dance (which is actually called The Batusi) — and of course show the episode to Jon. And somehow my son had gotten on a huge Ghostbusters kick and began requesting it for a lunch note. I’ll get around to the actual busters eventually, but how could I resist doing Slimer for pizza day? And yes, that’s Killer Croc, not Godzilla or just a random alligator. I know there’s not much distinctive about him, but at least he’s practicing good oral hygiene.
. 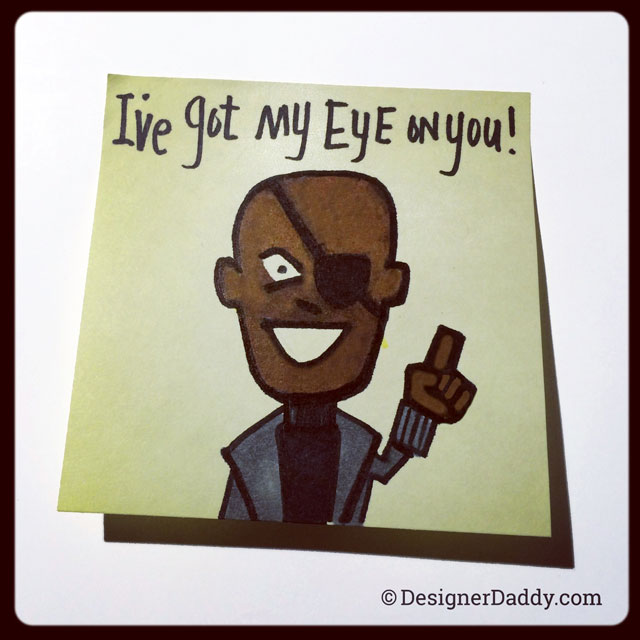 Can’t you just hear Sam Jackson’s voice when you read this? Director Fury also showed up in The Winter Soldier, as well as Marvel’s Agents of S.H.I.E.L.D., whose bandwagon I jumped back on when I heard it was finally getting good. I won’t spoil anything, other than to say Plot Twists Out the Ying-Yang.

While Mr. Stormtrooper here isn’t the most creative doodle I’ve done, I was pretty pleased with myself for its overall cleverness. Of course Jon doesn’t get how clever his dear old Dad is… but he will someday. 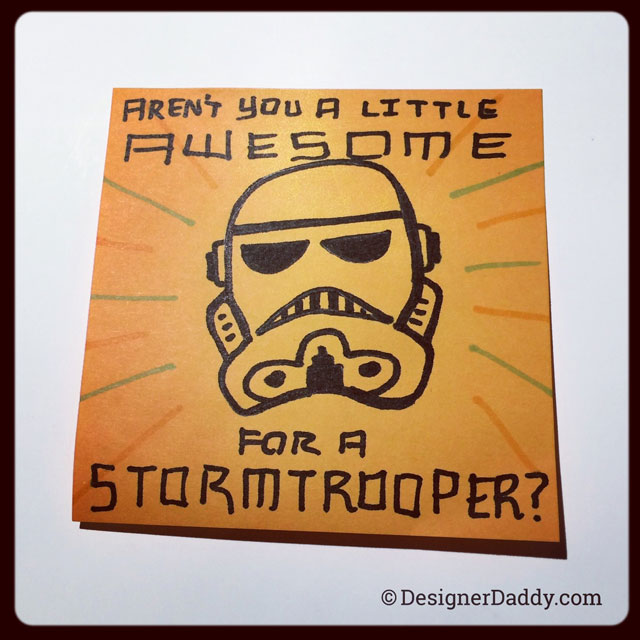 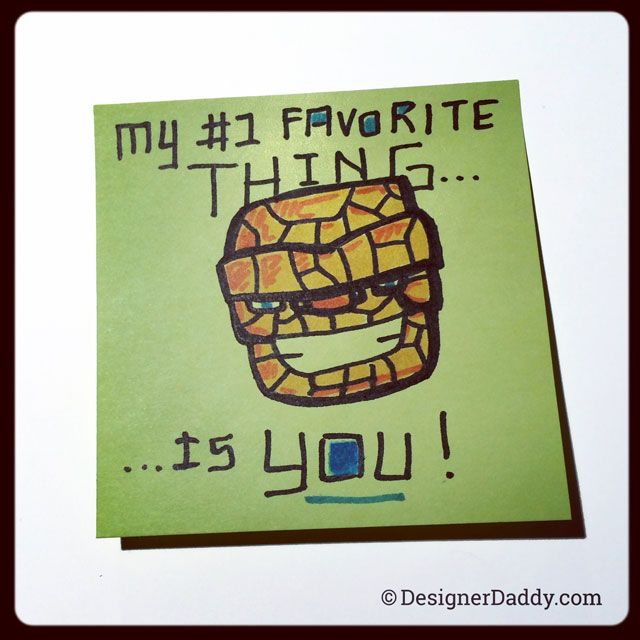 This is The Thing’s third (or 4th?) appearance on SuperLunchNotes. He’s especially special to me because he was featured as the main graphic in an interview I did with my pal Zach Rosenberg from 8BitDad, and then just this week Old Blue Eyes was part of a very cool post (also by Zach) titled “25 Reasons Kids SHOULD Be Left Alone With Their Dads.” I was #17! 🙂 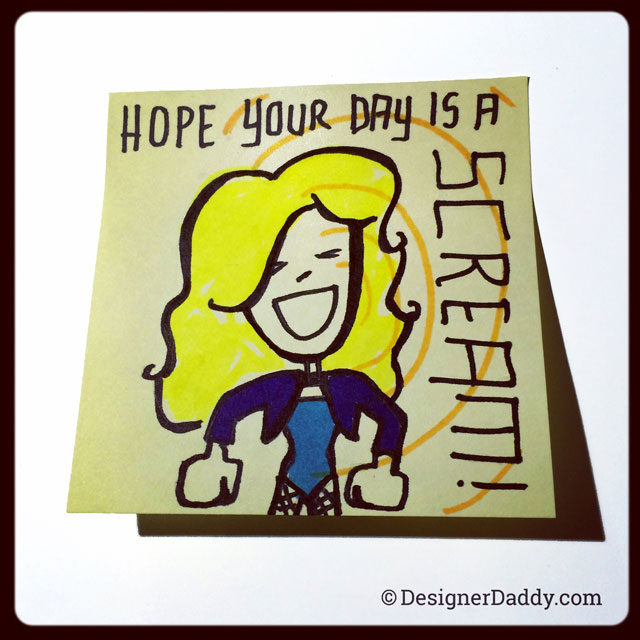 Black Canary was my first lunch note flop. I had decided to revisit theme weeks with a second flock of BIRD WEEK. On the drive home from preschool, as part of our ritual I asked Jon about his day, if he got play outside, etc.

Also part of our regular patter, I asked, “Did you like your lunch note today?” Silence. I cautiously inquired, “Do you know who it was?” Another long pause… then, “LADY GAGA?!?” 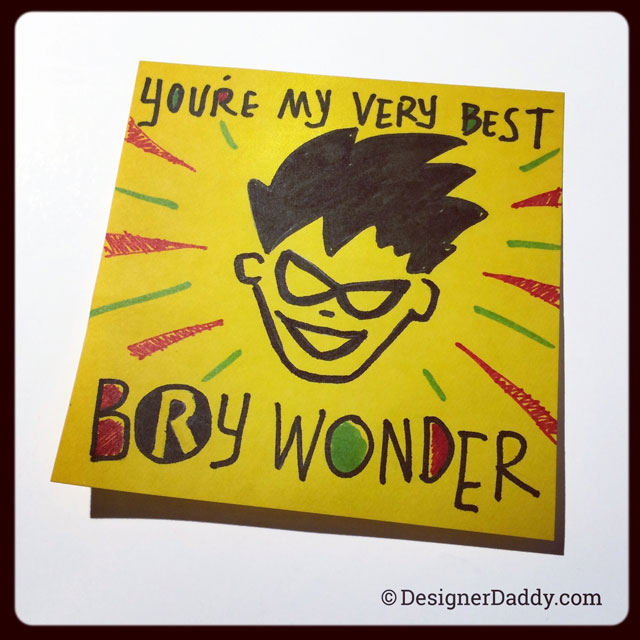 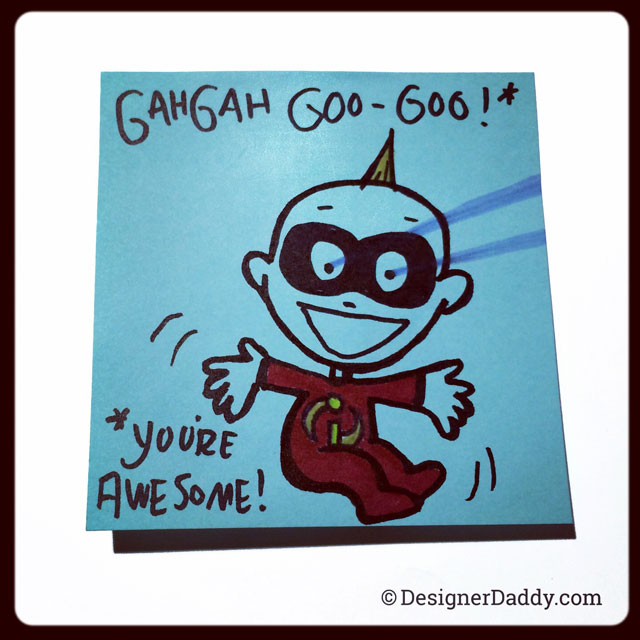 I’d done a couple of Disney characters already, but only superhero types (Mr. Incredible, Buzz Lightyear). But after Jon declared Peter Pan was a superhero (“Because he can fly and fight pirates!”), I thought I’d devote a whole week to Walt’s wonderful world.

However I quickly ran out of superhero ideas, so just did some of my favorites. But seriously, I could probably get a whole year out of Disney characters alone. Sponsored post, anyone? (I know you’re listening…) 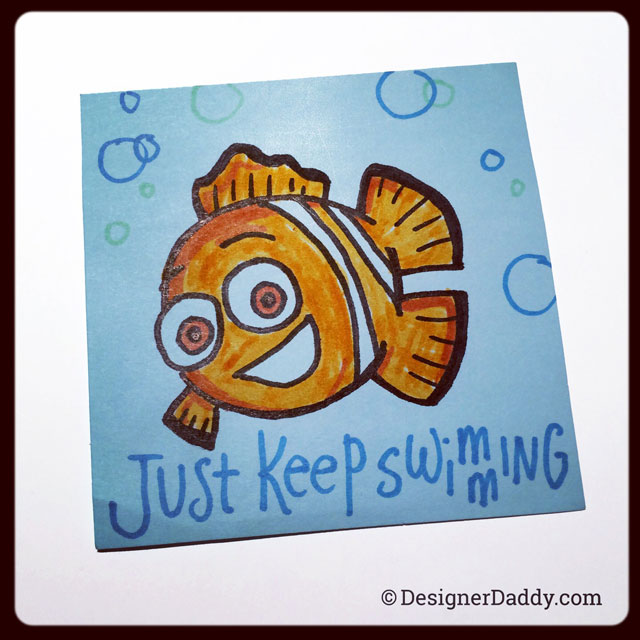 Yes, I KNOW. I’ve already been told (by my 4-year old son) that DORY says “Just keep swimming,” not Nemo. 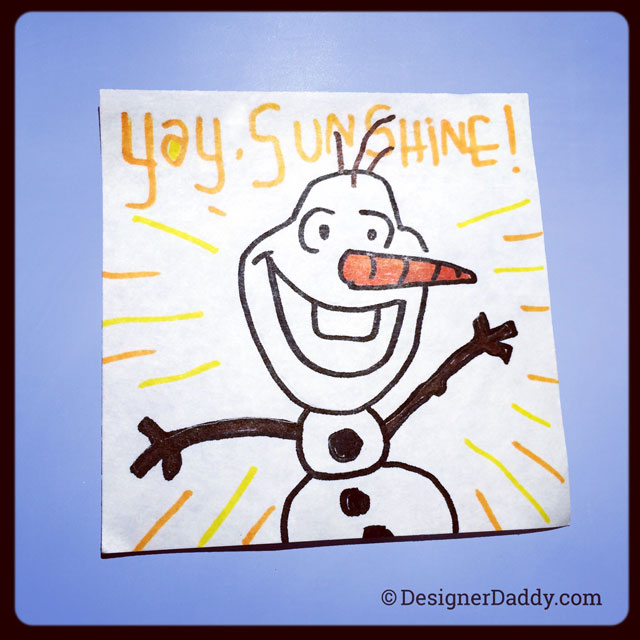 And we end with Olaf, the “star” of Frozen. This guy seriously needs to have his own movie. Which I’m sure has already been in the works for several months years already.
.

Which from these batches are your favorites? Let me know in the comments!

For a daily dose of lunch-time fun, follow @SuperLunchNotes on Instagram. And as always — if you haven’t yet, please come visit Designer Daddy on Facebook, give the page a Like, and join in the conversation!