I rarely use the word “perfect,” but our wedding day — long in the planning and exponentially longer in the legalizing — was about as near perfection as it gets. And since I’ve been yammering on and on about it for so long, I wanted to share some (more*) of the highlights of this truly blessed event. 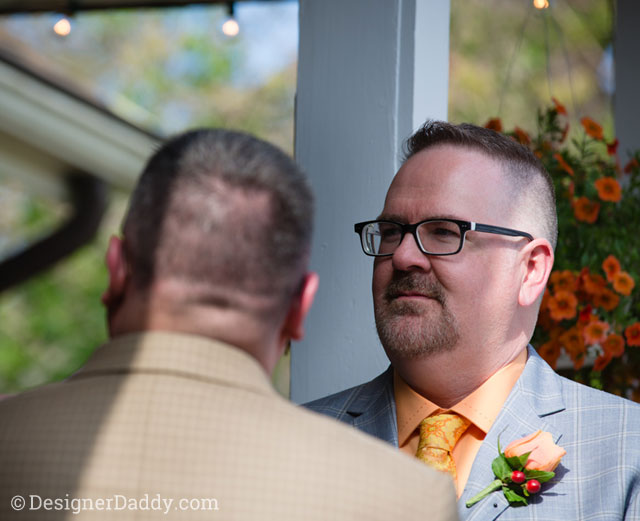 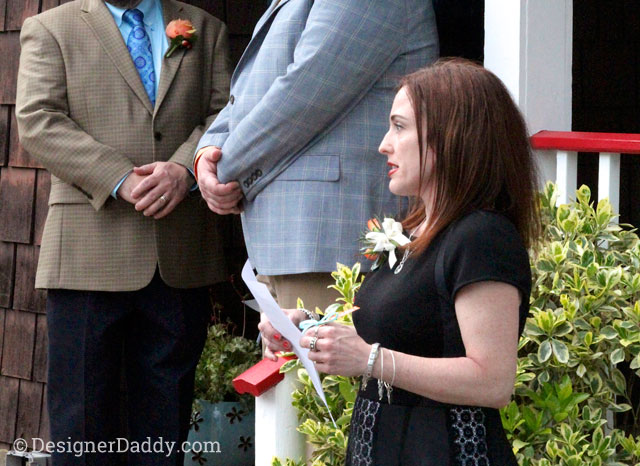 Nick’s sister Rosella read from I Corinthians about love and all it entails, the same passage his other sister Dana had read at our commitment ceremony.. 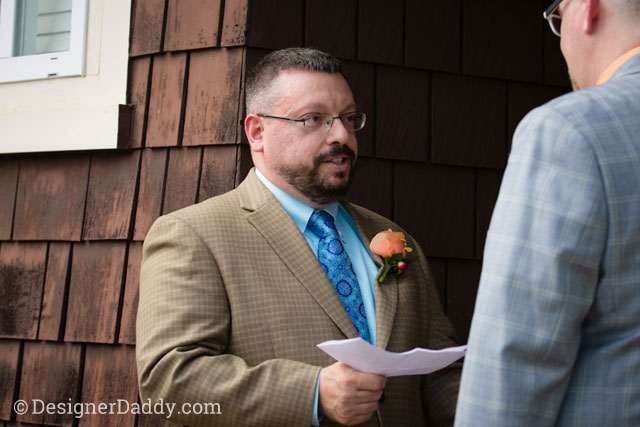 WE DO. The ceremony itself was short and very, very sweet, standing on the steps of our back porch. Nick and I made the same vows to each other as at our commitment ceremony 10 years earlier, but with some father-related additions. 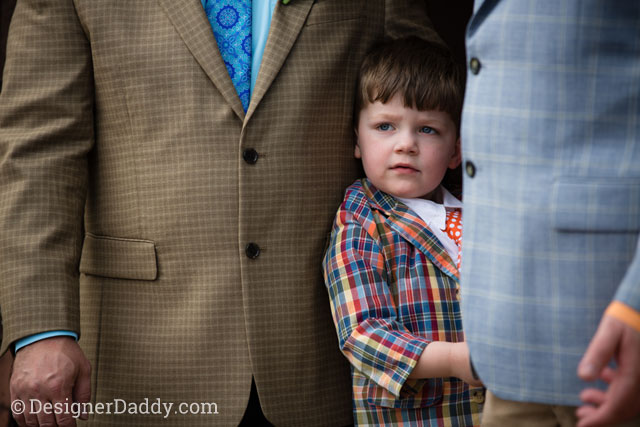 This is everything. Jon’s so often daring and adventurous, but he still needs his daddies to have his back. I love this boy more than I ever thought I could love anything or anyone, and am so grateful to have shared this day with him. 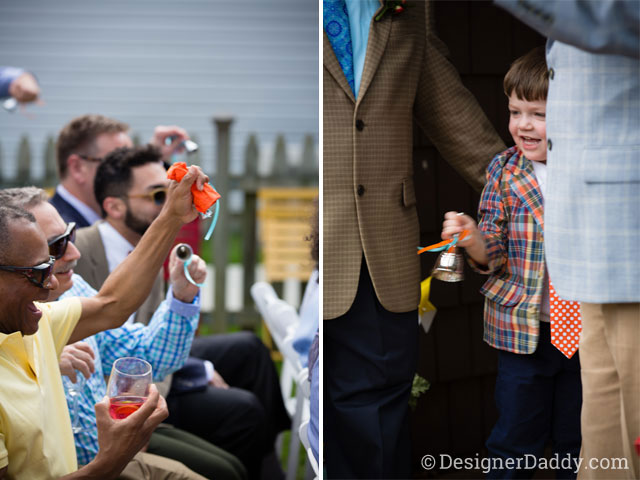 WEDDING BELLS. We’d already exchanged rings during our commitment ceremony, so instead of being the ring bearer, Jon was the “bell ringer.” After the service was finished, and we were declared “Husbands, and companions for life,” I called Jon up to ring a big silver bell, which was then echoed by all of the guests and the small bells they received beforehand. You can read the origin of this idea (which was his, by the way) in this post about the day same-sex marriage was legalized in our home state of Maryland. 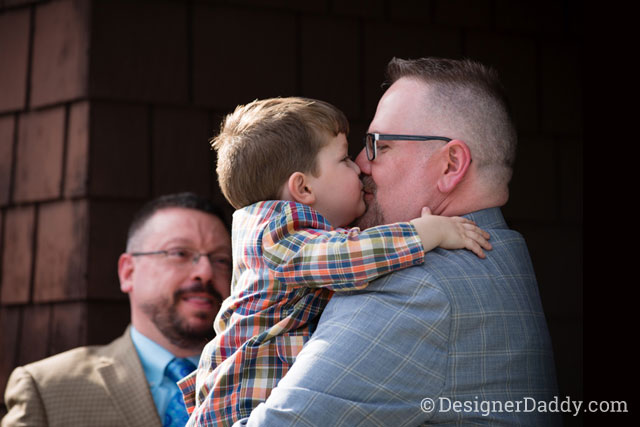 You can bet Daddy and Papa got a smooch in first, but I sure do love this picture of me and my effusively affectionate son. They never outgrow that, right? 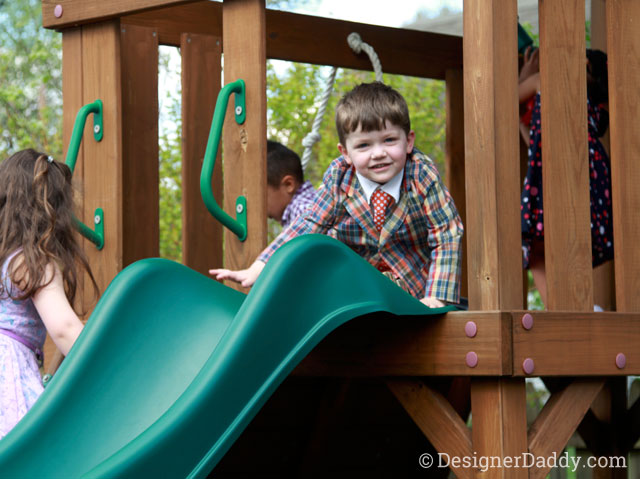 PARTY TIME! As soon as the formalities were finished, the adults hit the bar and the kids hit the swing set. 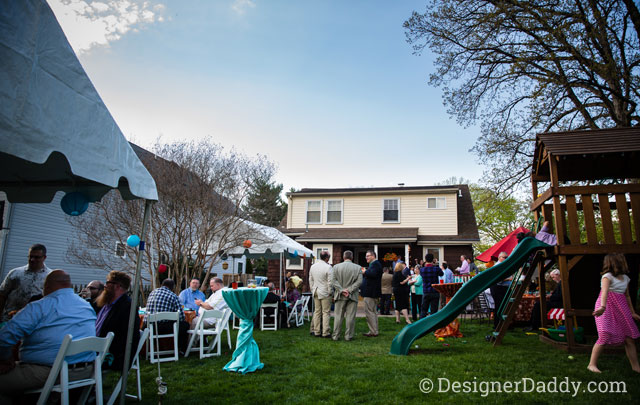 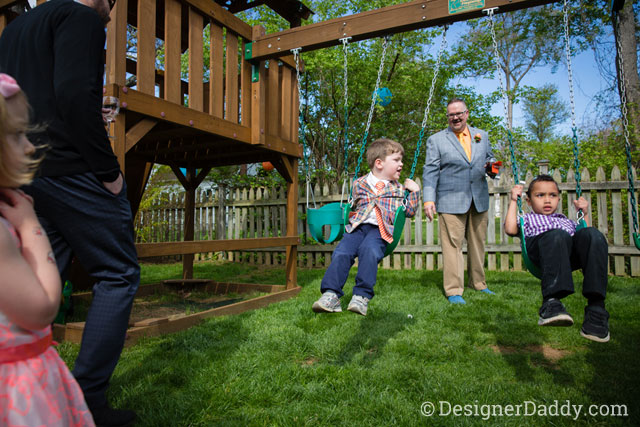 I’m attempting to multitask (drinking and pushing) but Jon can tell I’m not using both hands, and is not having it. 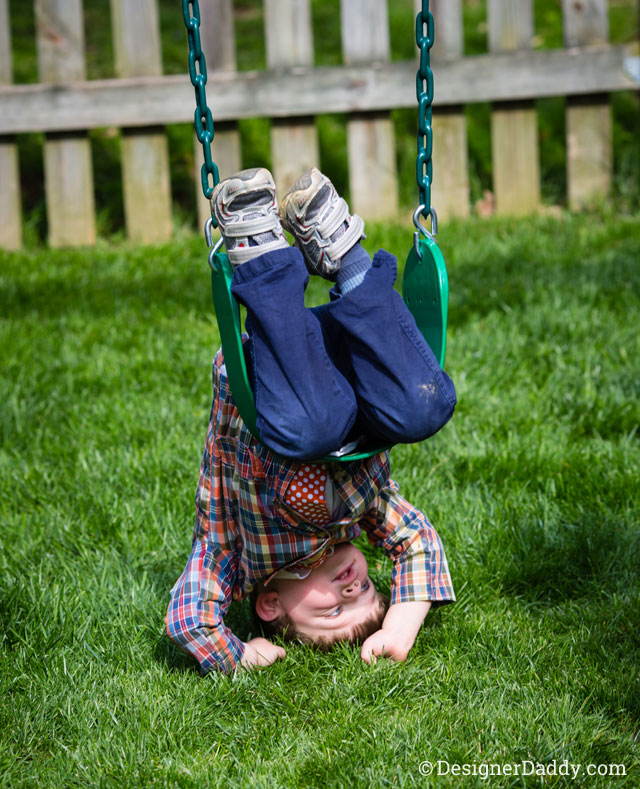 All weddings should be this fun, no? 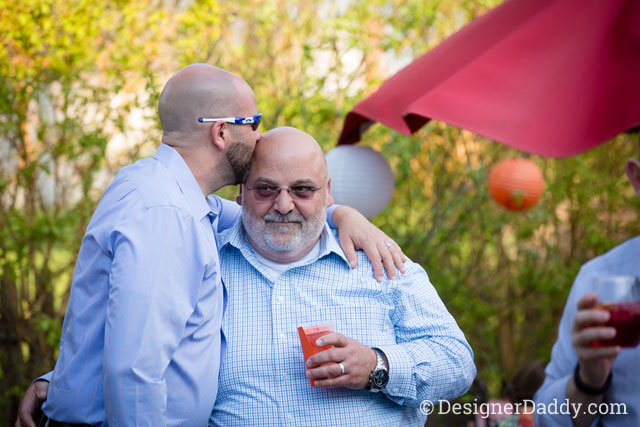 CHEERS! After more drinking and some dinner, toasts were given by two of our dearest friends. Frank (seen here being smooched by his husband, Mike) has been one of our best friends for over 15 years. Andrew (below) was one of the first good friends I made as a member of the Gay Men’s Chorus of Washington, and he and my other chorus brothers have become a part of our extended family, bringing the number of gay uncles Jon has to near world record status. 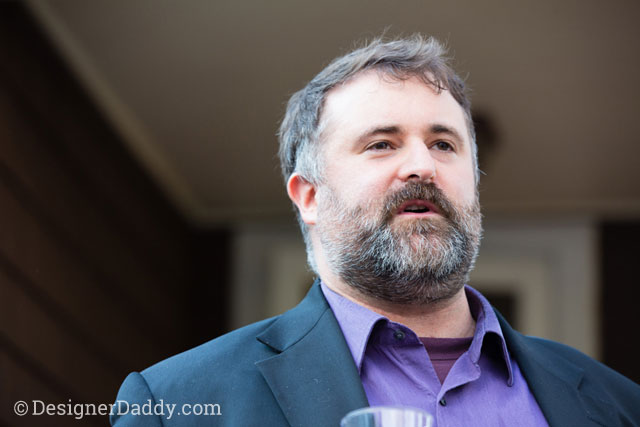 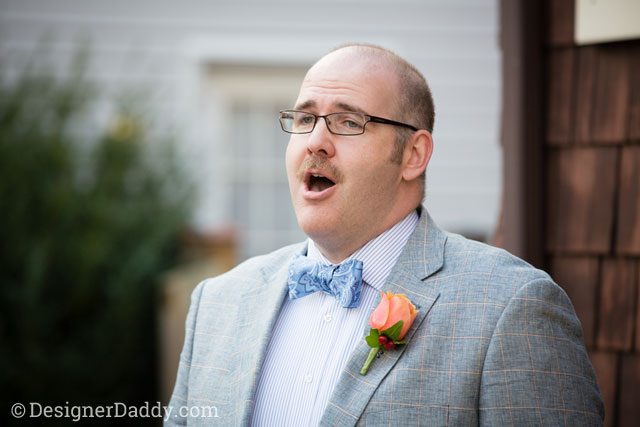 BROTHERLY LOVE. Speaking of uncles… Uncle Bryan and his partner Jon (AKA “Big Jon”) made the trip from Salt Lake City so that he could sing at our wedding. Bryan was going through his own identity crisis at the time of our commitment ceremony, and chose not to attend. While it was disappointing for sure, as soon as he came out and our relationship improved, I couldn’t wait until the day I got legally married and his lovely voice (and spirit) could be part of that celebration. He’s always been my goofy younger brother, but when Bryan opens his mouth to sing it melts my heart and stirs my soul. 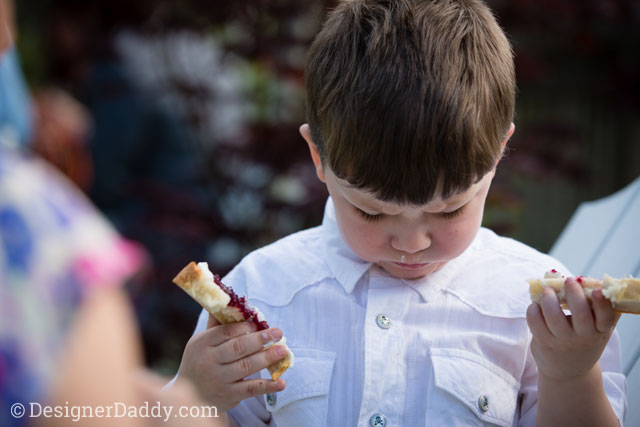 At one point I looked over and not only were Jon’s coat, tie and shoes missing, his white shirt was covered with what looked like an exploded bird. Turns out it was a combination of pasta sauce and a whole lot of grape jelly. Serves me right for putting a 4-year old in white. 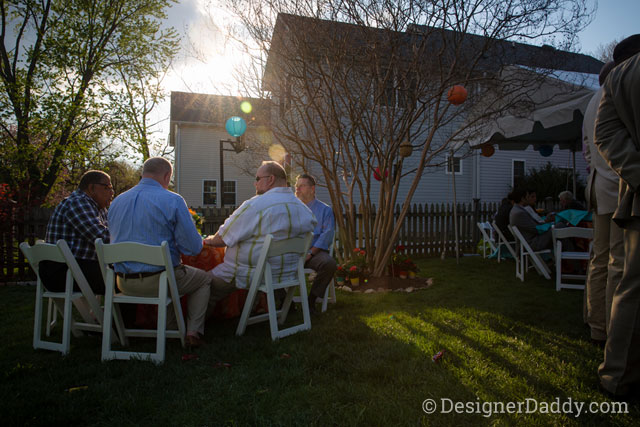 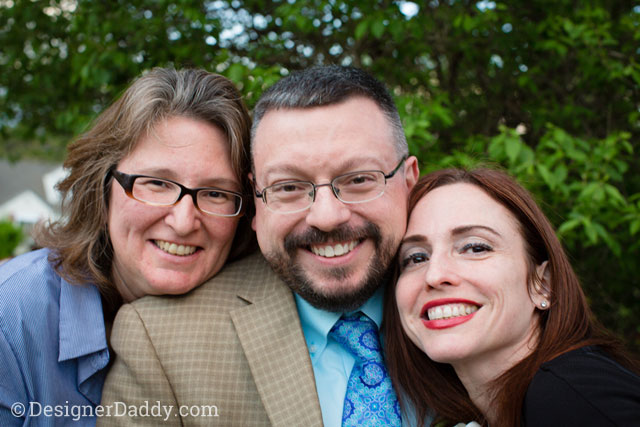 FAMILY PHOTOS. One of the first things that attracted me to Papa was his smile. Here he is with his our sisters, Dana and Rosella, who share the same great family trait. 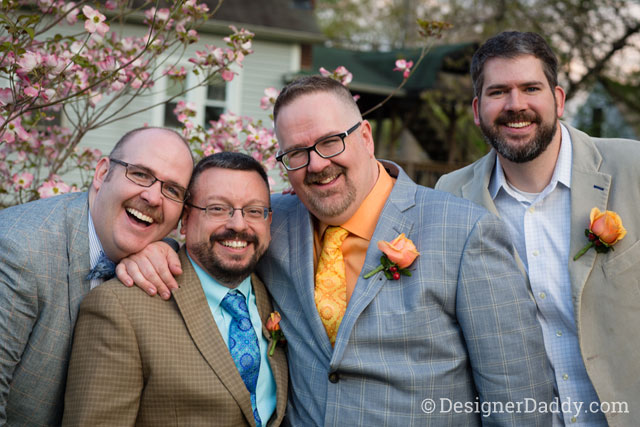 I inherited my first sisters, Nick got three brothers out of the deal. Cheesing it up with two of those, Bryan and Brandon. 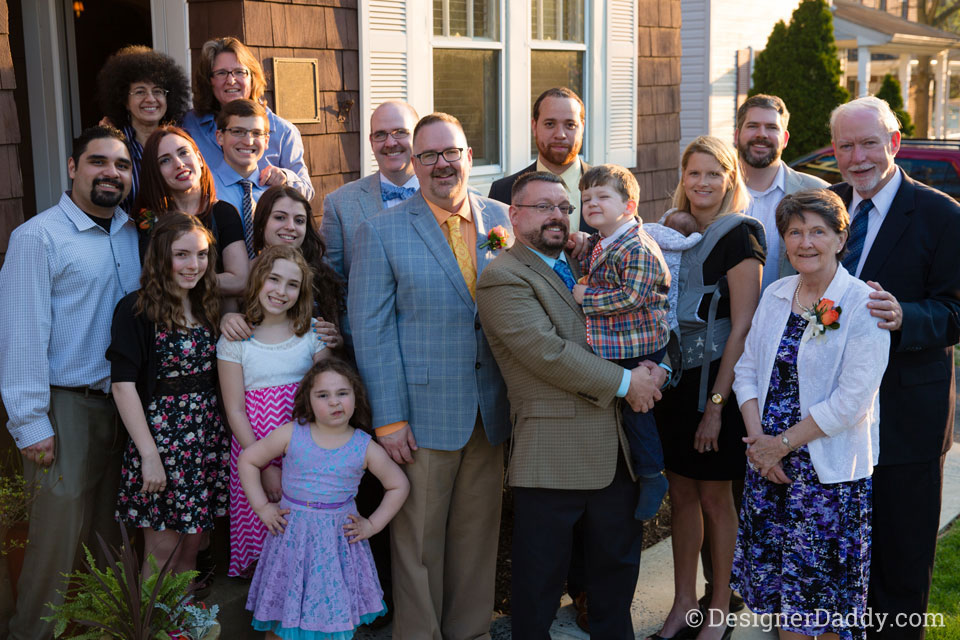 In addition to our marriage becoming legal and being able to involve Jon in the ceremony, the other big reason for wanting to have a ceremony (as opposed to just a trip to the courthouse) was so more of our family could be included. When we had our ceremony in 2003, only six family members were able to make it. Ten years later, and through a few changes of heart and several births, that number increased to 16. Note Jon and his sassy cousin Maya making silly faces… and the teeny-tiny one behind Jon is his 3-week old cousin Addie. I love this picture so big. 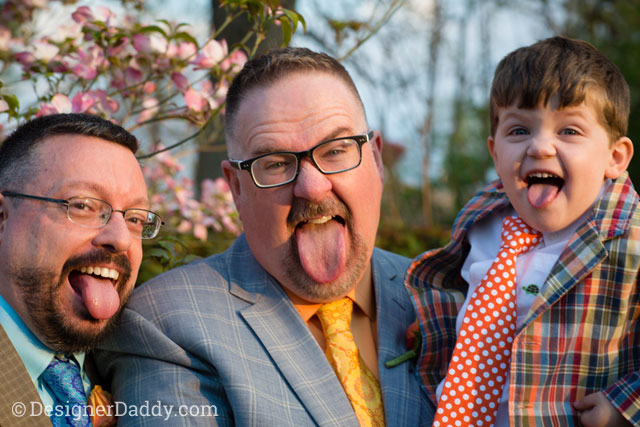 We can’t always get Jon to smile, eat, or really do much of what we ask on command. But we can always manage to get this pose to happen. (Note the second white shirt I had on hand for the family photos. No bird guts or grape jelly!) 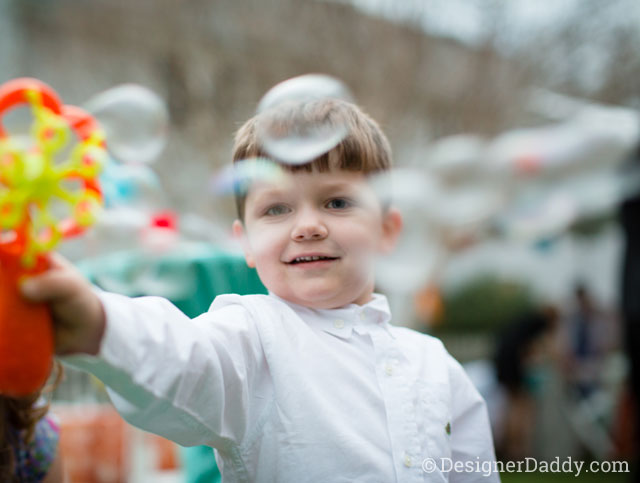 Okay, family photos are done — coat, tie and shoes are off again. There are bubbles to be made! 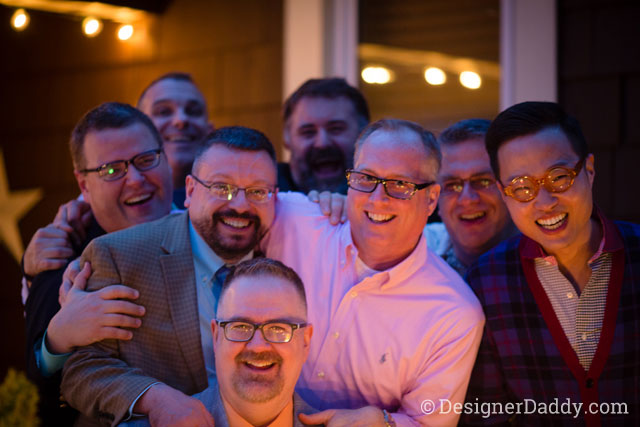 Did I mention the weather was ABSOLUTELY perfect? The forecast had called for a 30% chance of rain for the entire span of the wedding, but we didn’t get a drop. Nothing but sunshine and breeze. A small drizzle did start around 8:30, which was right after we got this fun shot in with a gaggle of my chorus brothers and Jonathan (in pink), our good friend and miracle-working wedding planner. 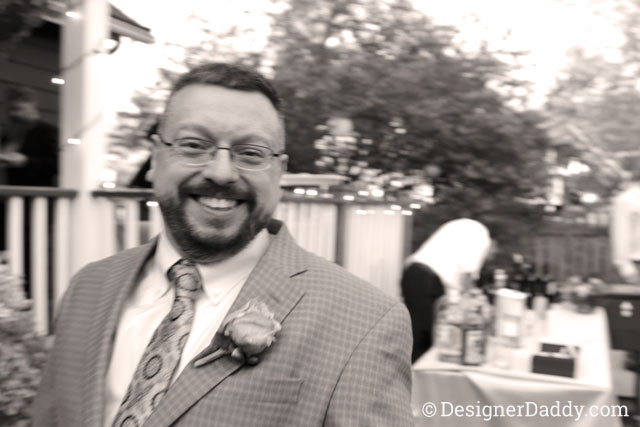 A quick shot of Papa captured by my friend Soo. Am I the luckiest husband ever, or what? 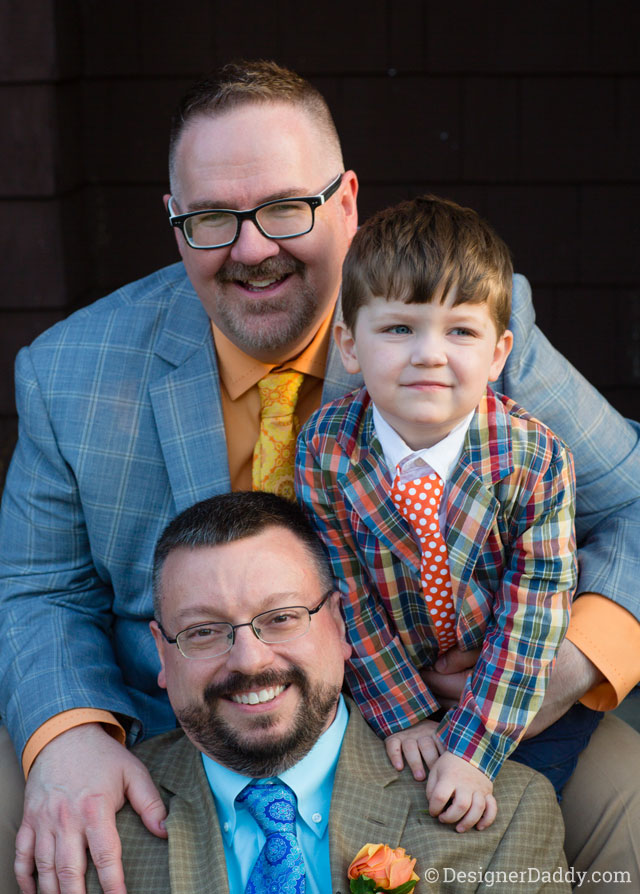 FINAL WORD. Like I said at the start of this post — I almost never use the word “perfect.” Maybe it’s because I’m too cynical or superstitious. Or because it’s too important of a word to use lightly. But between the weather, food, ceremony, music, friends and family — and with my incredible husband and son by my side — I can confidently say, I had the perfect wedding day.

*Check out my other post of wedding highlights, with lots of cool designery stuff, Part 1: The Designer Album.

Unless noted otherwise, all photos were shot by the fabulous Piper Watson. Please consider her for your next big life event — she’s a wonderful photographer and person!

12 responses to “My Big Gay Wedding, Part 2: The Daddy Album”