Barilla Wants to Share the Table, Even with Same-Sex Parents

This is a sponsored post written by me on behalf of Barilla, but opinions are my own.

In September of last year, the chairman of Barilla made the following statements in a radio interview:

“I would never do (a commercial) with a homosexual family, not for lack of respect
but because we don’t agree with them. Ours is a classic family where the woman plays
a fundamental role. … If [gays] don’t like it, they can go eat another brand.” 1

“I have no respect for adoption by gay families because this concerns a person who
is not able to choose.” 2

Like many others, I found Guido Barilla’s comments ignorant, insulting and infuriating. Our family is made up of two gay dads (one of whom is Italian) and an adopted son, all of us consumers of large amounts of pasta. I’m not sure there were any ways left to offend us. So like many others, our family made a conscious decision not to buy their products again.

While I’d heard of efforts on the part of Barilla to make amends, I paid them little mind. I was skeptical they could do anything to salvage a relationship with the LGBT community and our allies.

But then I was asked to take part in Barilla’s Share the Table campaign. And I was approached specifically because I’m a gay father. I learned they’d also enlisted other LGBT bloggers, including fellow parents Polly Pagenhart and Vikki Reich.

According to the materials I was given and my own research, Barilla has been making changes ever since the interview and subsequent boycott. They met with and received counsel from GLAAD; established a Diversity & Inclusion Board and appointed a Chief Diversity Officer; participated in HRC’s Corporate Equality Index; and as evidenced by this post, they want to partner with influencers in the LGBT community as part of Share the Table, to ensure families of all kinds are included.

We’ve all heard plenty of corporate apologies, yet this invitation resonated because it was made directly to me. And as I read more about Barilla’s inclusiveness in regards to the importance of family meal time, I was immediately reminded of our trip to Italy two years ago. 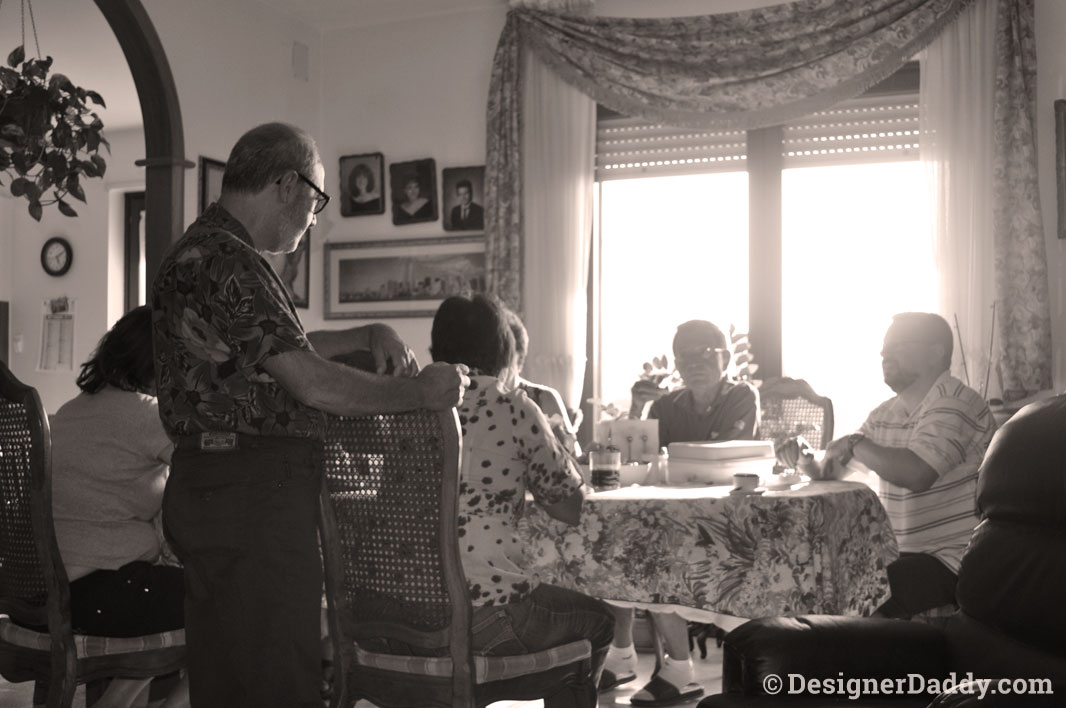 One of many long and wonderful meals around Nonna’s table

Papa’s parents moved back to their hometown in the Puglia region of Italy about 15 years ago. JJ had only met his Nonna once on a brief visit to the US, and he had never met Papa’s father. As Nonno had greatly reduced his long-distance traveling, we decided to make the transatlantic journey with our 2-1/2 year old in tow.

In addition to the stress of traveling with a toddler, I was also nervous about being on my in-laws’ home turf for almost two weeks. As you can imagine, Papa’s and my relationship hasn’t always been met with open arms in his traditional Italian Catholic family. Yet we continued to stay as involved as we could, making our presence (and presents) known on holidays, christenings, birthdays and first communions… and of course at mealtime. But I’d be lying if I said my old school Italian mother-in-law didn’t intimidate me more than a little. And Nonno and I had spoken maybe 10 words to each other in as many years.

However, the trip proved to be truly transformative for us all. JJ got lots of Nonna time and finally got to meet his Nonno (as well as 30+ other relatives who live in the area); Papa reconnected with his extended family, many of whom he hadn’t seen since he was a little boy; and I experienced a new found sense of belonging in my husband’s family. The warmth and acceptance by in-laws, aunts and uncles, cousins and neighbors was overwhelming and wonderful. Naturally, much of this happened around the dinner table.

Whether it was JJ eating a mountain of Nonna’s spaghetti (to the rapturous applause of the whole family) after spending his first few days eating only pretzels and Nutella, or watching Papa’s eyes light up as his mother made his all-time favorite dish — homemade cavatelli and broccoli rabe; or getting to sample some of the best and/or most peculiar foods I’d ever eaten: roasted rabbit, octopus, squash flowers stuffed with ricotta, prickly pear, panzarotti, pizza rustica, chitarra pasta with stracciatella cheese, fresh pomegranates and figs, and MAMMA MIA! — the best gelato in the history of humankind.

So why am I sharing this story and very likely making you hungry? Because while we haven’t always seen eye-to-eye with our families, Papa and I have continued to be involved, stay engaged, argue from time-to-time, and give second, third and fourth chances as we see our relatives grow in their understanding and appreciation of our relationship and our family. And we’ve all been the richer (and fuller) for it.

If Barilla is sincere in their efforts to not just be diverse for the sake of diversity, but to truly “share their table” with any and all kinds of families, then I’m willing to hear them out and even help spread the message of communication, togetherness and family.
.

How to participate:
1. Take a photo or video of your family at the dinner table.
2. Share your photo/video on Facebook, Instagram or Twitter using the hashtag #ShareTheTable.
3. Put away your phones and enjoy your meal together!

For every post between now and April 30th, Barilla will help provide the monetary equivalent of ten meals ($1.11) to Feeding America (a nationwide nonprofit organization that helps feed communities across the US), up to one million meals. For more info and mealtime inspiration visit ShareTheTable.com.

You’ve probably seen me write about what a picky eater JJ is, so this little dinner montage is a pretty big deal.

This is a sponsored post written by me on behalf of Barilla. For every post using #ShareTheTable from now until 4/30/14, Barilla will donate a monetary equivalent of ten meals ($1.11) to Feeding America®, up to 1 million meals. Barilla will donate a maximum of $110,000. One dollar helps provide 9 meals secured by Feeding America® on behalf of local member food banks.

15 responses to “Barilla Wants to Share the Table, Even with Same-Sex Parents”