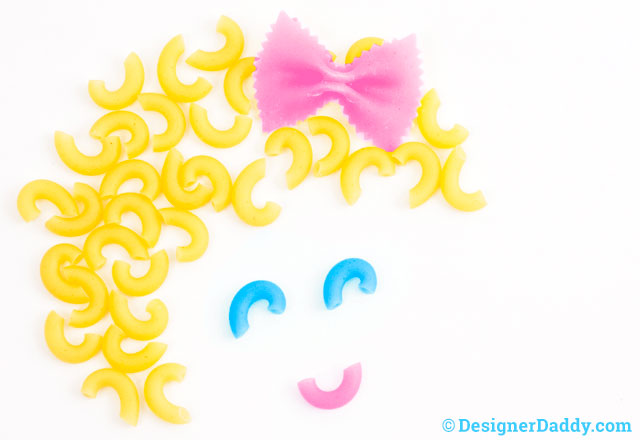 Being a caring and nurturing parent, my immediate response was to lovingly ask, “Are you [censored for the faint of heart] kidding me?”

She pointed to her nose again and I felt a spot just above her nostril where there was clearly something lodged and after trying and failing to look inside to see if I could at least tell how far up there it was, there was only one option left. So to the hospital we went.

Now, on a scale of one to “holy crap, we’re calling CPS, you monster” the ER was pretty chill with the whole situation, probably rating it a soft three. Kids put things in their noses often, apparently. Why? Same reason a person climbs a mountain, because it’s there. So after waiting around at good old Suburban Hospital in Bethesda, Maryland, the doctors came to us to try a few things to get the errant piece of pasta from Ana’s nose. Naturally, they asked what happened and I had to explain that they were making percussion shakers in music class at daycare with paper plates and uncooked pasta and somewhere along the way, my daughter decided, “Hey, look elbow macaroni. I bet that would feel great making its way towards my brain,” and so here we were.

After a few unsuccessful attempts to get it free, they informed me that there was one more thing we could try or else they’d likely have to sedate her to move to the more invasive side of things, but they needed my help to pull it off. Looking at my little girl, clearly in some pain, how could I refuse? “What do I do?” I asked, “Whatever it is, I’m down.” Now, here’s a little tip I can share with all of you for the day your child does the same thing because, again, kids do some really weird stuff. Because they’re curious. And weird. Actually, come to think of it, they’re a lot like drunk college students—they stumble around bumping into things, just lie down and fall asleep wherever and whenever the mood strikes them, act irrationally over the most trivial of things, mangle the English language, and make alarmingly poor decisions. Really, the only difference is age.

Anyway, they held Ana down and wanted me to completely cover her mouth with my own and give her a quick burst of air, the theory being that the force should be enough to dislodge the object far enough for them to reach it with a pair of tweezers. Of course, Ana was freaking out by this point because three nurses and doctors were holding her down like it’s a scene from One Flew Over the Cuckoo’s Nest, and all the kid wants to do is watch the World Series, but I’m trying my best to calm her down while the doctor is going, “No, no, honey, it’s ok. Daddy’s just going to give you a special kiss.”

Really, lady? Really?! That wasn’t helping. At all. At best, it sounded like something in the prelude to a Lifetime movie where the now teenaged girl is having flashbacks to some nightmare of a childhood spent in some cult. But, disturbing as it was, I did what I had to do and in one short puff, out came a semi-soggy piece of elbow macaroni in all its glory.

Not really embarrassed in the least, Ana walked around, shaking the now excised pasta in the little specimen jar they gave her, while I completed the discharge process. To anyone who looked her way, she was sure to tell them, “We don’t put these in our noses, only in our mouths,” as if it was some secret wisdom she’d gleaned from an ancient Tibetan monk. Later, on the way home, stuck in the doldrums of rush hour traffic, I turned to her, specimen jar in hand, and casually asked, “Ana, at what point did it seem like a good idea to put this up your nose, and then not tell anyone?” Her response, “I don’t want to talk about it, Daddy.” Fair enough.

Thank you Charles for sharing your story, and let’s get the kids together soon and film an ‘Lil Avengers movie. I’ve got a pretty good idea who can play Hulk…