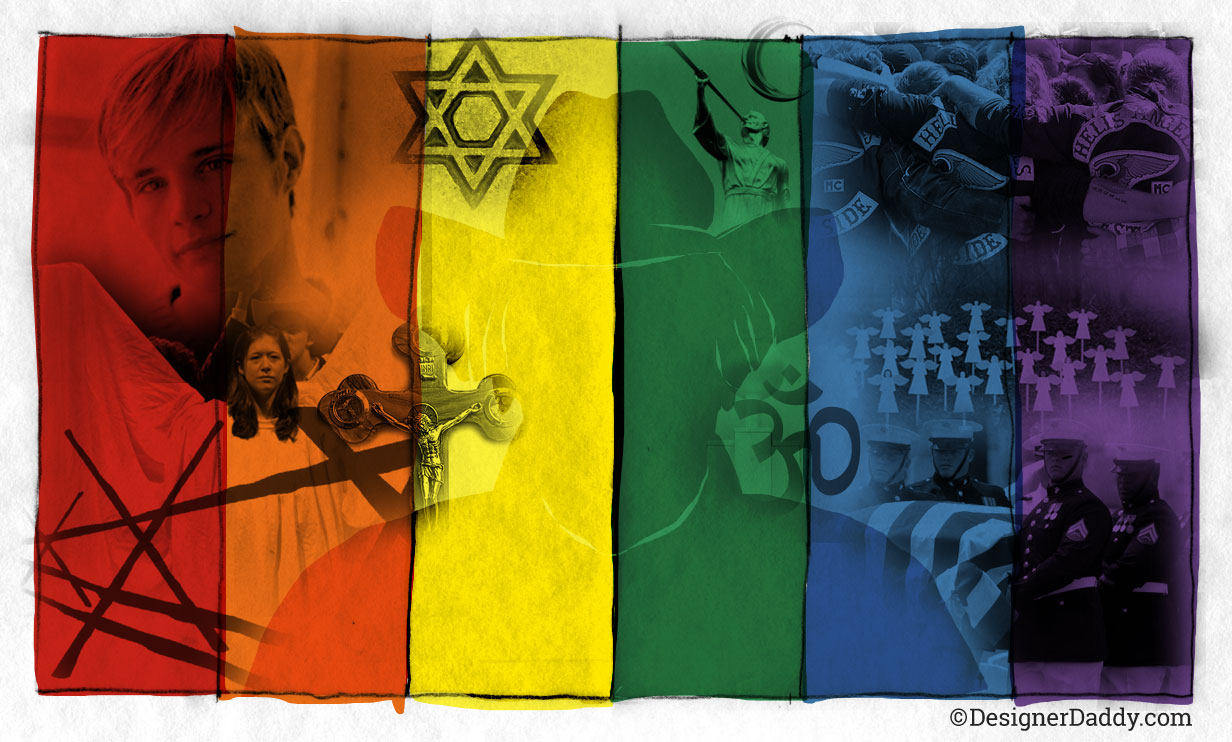 My original idea for this illustration included a rough line drawing of an oft-seen photo of Fred Phelps. The intent was to depict the sheer evil of the man in pen and ink, superimposed over a collage of the disparate groups of people his hatred targeted. I scanned my drawing and began layering in images on the computer: Matthew Shepard and the iconic fence he was tied to; a scene from a production of The Laramie Project; the casket of an Iraq War veteran, draped in the American flag; paper angels representing the victims of the Sandy Hook Elementary School shooting and the interlocked bikers that protected their funerals; symbols representing Jews, Muslims, Hindus, Mormons and Catholics.

As I fine-tuned the design, I hid the layer that included Phelps’ face. I looked at all of these otherwise unconnected people and realized I’d been going about this all wrong.

Phelps is gone…and what is left behind?

A young man murdered for being gay, whose death was a touch point for the modern gay rights movement. A fence that became a line never to be crossed again. A play telling the story of this boy’s life, productions of which have been performed in high schools, universities, churches and community theaters all across the country and around the world.

A community bombarded — and then bolstered — by countless images of “GOD HATES FAGS,” into a place of ever-increasing acceptance — in the work place, the military, in politics, at the marriage altar and with the families they choose to create.

A nation divided over foreign wars, yet united in support for those killed in battle to be laid to rest with dignity and in peace.

A nation mourning the slaughter of innocents, heartened by neighbors from every walk of life uniting to support the loved ones left behind.

People of faith distancing themselves from extremists, examining their own prejudices, reconsidering centuries of discrimination.

And still, children and grandchildren raised on hatred — abandoning their patriarch, yet continuing to bear his standards of homophobia, bigotry and ignorance.

So for all save the last, I say thank you to Fred Phelps. Thank you for enraging us, empowering us and uniting us. Thank you for bringing together LGBT and civil rights activists, veterans and pacifists, bikers and schoolteachers, Republicans and Democrats, atheists and believers. And thank you for not being someone my son has to grow up knowing about.

I won’t go so far as to revel in his demise, but I do wish I could have been there when Phelps finally met his maker and was informed that it is not in fact Fags that God hates, but hatred itself that He despises above all else.

22 responses to “A Gay Man’s Tribute to Fred Phelps”