Our nuptials are swiftly approaching. In fact, the invitation has become something of an epic endeavor (this should come as a shock to no one who knows me well) so I probably shouldn’t even be talking to you until it’s done. However, I did happen to squeeze out a save the date…
. 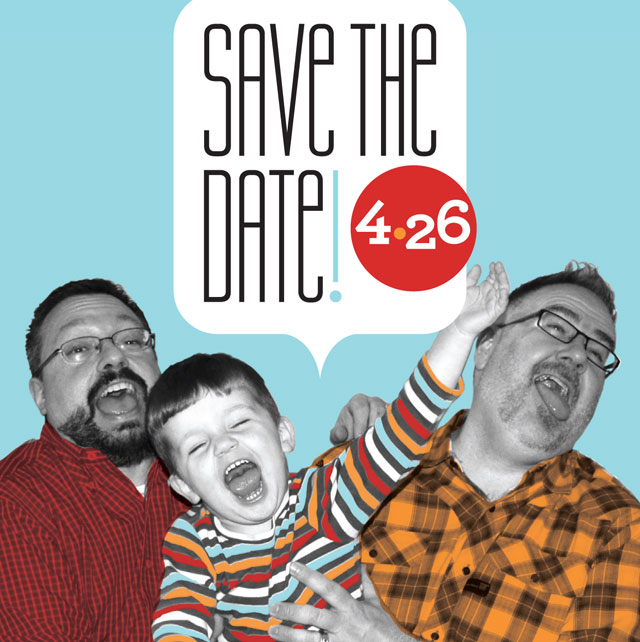 The photo is from a failed attempt at a family Christmas photo, but was just too wackadoo not to use. Plus this is how we actually look most of the time.

So about the “engaged again” bit.

The first time was just a few weeks after 9/11. Papa (who was just Nick then) and I had already been together for several years, and had talked about having a ceremony of some kind down the road. As with many of us at that time, my priorities were put into clearer focus, loved ones held closer, and an urgency to experience life swept over me. It was the 5th anniversary of our first date, and we went to a new Italian restaurant in Cleveland Park. After we got our drinks and were waiting on our meal, I pulled a velvet pouch out of my pocket and gave Nick my late Grandfather’s wedding band and asked him to marry me. No time like the present was the gist of my proposal.

He said yes, and we had a lovely, memorable, once-in-a-lifetime commitment ceremony at a small Unitarian church nestled in some woods. Over 100 of our friends and family celebrated, danced, ate and drank with us on that very special autumn night. We registered and got a very impressive haul. We honeymooned on the Amalfi Coast — which still takes my breath away when I think about it — and were visited by family Nick hadn’t seen in over 15 years.

Fast-forward a decade, a first home, a dog, a son and quite a few gray hairs.

The second time was moments after the Supreme Court overturned Prop8 and DOMA. I had been in DC for most of the day, having sung the National Anthem in front of SCOTUS with my chorus brothers. Afterwards I stopped by Papa’s office downtown with a celebratory cupcake and a smooch. We talked a little about some of the finer details of the pieces of legislation in question, which of course made my head swim, already dizzy from the insane June DC heat. When I returned home, Papa — ever the thorough attorney — had sent me an email with a long description of what had transpired in the Court that morning, with the impact on same sex couples highlighted for me. And a proposal to marry him, legally.

Two proposals, equally as meaningful, both attached to external events that impacted us personally. The first nearer the start, from a place of wanting to draw closer; an emotional reaction; a fear of missing a moment and a man I’d waited my whole life for. The second well into our deeply woven lives, after both our state and our country granted us equality, legality and security; a sigh of relief after a generation of striving; a promise to have, hold, cherish and all the other things we’d already been doing for nearly two decades.

I have wondered sometimes if Papa and I are too different. Occasionally I’ll envy the couple that works together or were high school sweethearts or that have the same name. But then I look at our two proposals and how divergent they are, yet how they paint a complete picture of half a lifetime of companionship, comfort, support and love. I celebrate our differences, our varying motivations and approaches. I celebrate that we’ve gotten to propose to one another, each in our own unique way. And I look forward to once again celebrating in ceremony, standing by his side and saying “I do.”