I still remember the first time I got flowers. It was my first serious relationship, and they were delivered to the graphic design studio where I was working—my first job in DC. It was an open air setup (with glass walls, cubicles and such) so everyone could see when they arrived. It was Valentine’s Day, and my boyfriend had sent me a huge arrangement in a vase, which sat on the shelf in my cube for about a week, attracting non-stop Oohs and Awws from my female co-workers and comments like “You must have really put out” from the men. I was a wee bit embarrassed for being on the spot, but mostly loved the attention, and especially the thoughtfulness of my guy.

Just after this past Valentine’s Day, I asked a bunch of guys if they’d ever received flowers—if they liked it or not, if it made them feel embarrassed or emasculated, etc. Here are some of my favorite answers—which of course all support my philosophy that Real Men Stop and Smell the Roses.

“Good flowers, the ones that live longer than a mayfly, are great to give and greater to get. The closest thing I have to a spouse right now is John, who sent me a vaseful when I was in the hospital last fall. It was perfect.”
Doug, former WWE wrestler, stunt double for John Cena*

“I am totally secure in who I am and I don’t find it the least bit embarrassing. The one thing I insist though is that he not get them for me on Valentine’s Day. While I may be comfortable accepting flowers, I’m still a cheapskate!”
Joey, lumberjack, cheapskate*

“The day of the first show that I directed, my wife sent me a bunch of flowers. Yes, I felt just as manly and twice as appreciated as I walked down the hallway with the arrangement. It was a good day.”
Creed, Broadway director, Batman*

“Received. Cool. Why would it not be cool?”
Dave, Olympic snowboarder, cool guy*

“The first year together, it was every month. Then it was every year, plus Valentine’s and my birthday. I loved it! The only down side was that all the ladies in the office were jealous, because their men never did squat!”
Lee, bon vivant, sky diver, hated by all women*

“I’ve gotten flowers before. I liked it. Unless they made me sneeze.”
Aaron, super spy, allergic to tacky flowers*

“A few years ago I started a new job at the beginning of February. My husband had flowers delivered at the office on Valentine’s Day. I was surprised both because he never sent me flowers before and because I had not gotten around to coming out to my co-workers yet. Nothing says ‘I Love You’ more than forcing your husband out of the closet his second week at a new job!”
H.F., first openly gay CEO of a Fortune 500 company, black belt in everything*

“I love it! Not saying that it is a bunch of them or anything—just a few to say that he is thinking of me. I do the same in return, except I always put in a little poem or note.”
Steve, cave-jumper, Pulitzer prize-winning poet*

“I never have but think it would be cool. It’s outside the norm and I like that. Plus it would be showing my wife was giving a thoughtful gift, not just a standard ‘guy gift.’ “
Joel, bronco-buster, ass-kicker, rule-breaker*

“My wife sent me roses at work once. All the women in my office joked that I must have done something magical in bed the night before. I laughed and told them no, but they were right.“
Al, construction worker, bends steel with his bare hands*

*All names and quotes are real. I may have embellished their occupations a bit. Regardless, they’re all real Real Men.

So why all the flower talk?

.
A very cool company called The Bouqs (sounds like “The Dukes”) sent me some flowers and asked me to write a review. I was already a fan of flowers and of snarky marketing campaigns, so this was a no-brainer. I ordered my flowers right after Valentine’s Day, and there was a huge snowstorm (you remember the one — or two, or three we’ve had this winter) so they told me up front it would take a day or so longer.

They got here in some very cool packaging. I’m a sucker for great packaging and attention to detail. Like the “open here” note — instructions are a must, y’all. Yes, it was a little banged up, but the flowers were well protected and in perfect shape, even after an extra day floating around in a snowstorm. 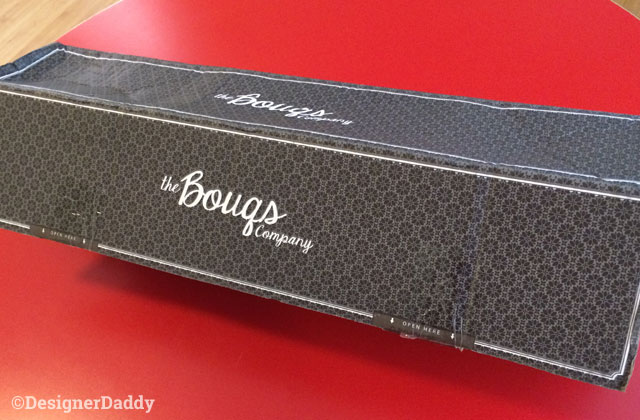 The box also included a handy infographic on how to care for your flowers and get the longest bloom out of them. And pretty much everything about the packaging was recyclable. 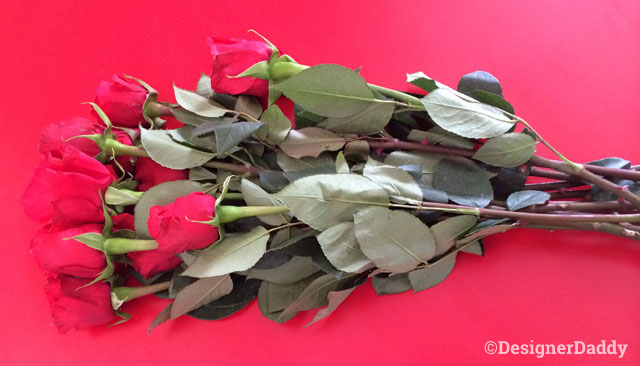 I initially put the flowers in a tall green vase. Snappy, yes? Can you tell I’ve got a thing for red? 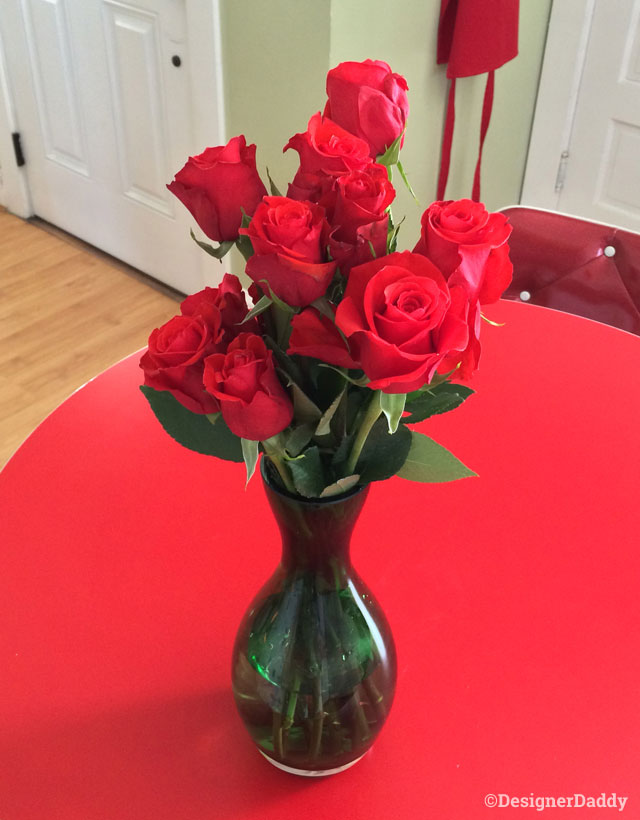 A couple of days later, I trimmed them down and put them in a short cobalt vase. Still looking good! 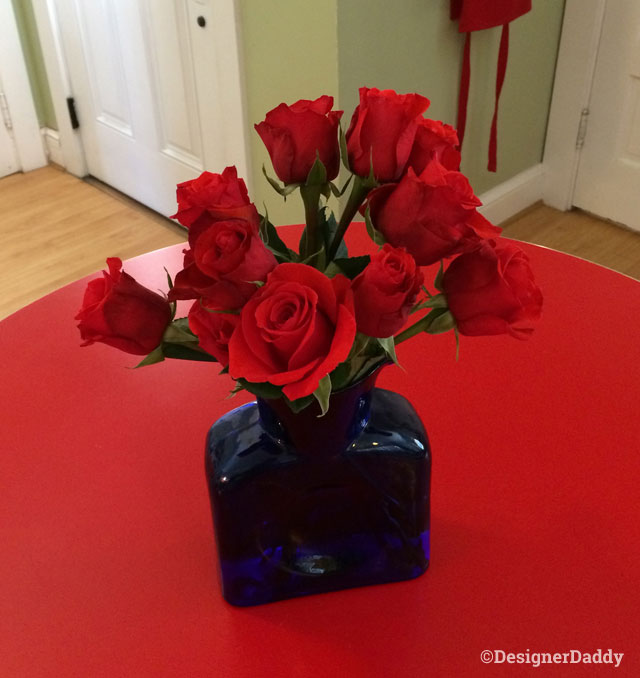 My experience with The Bouqs was all-around awesome. And I will definitely be using them again. And not just because of their cool name/tagline (The Bouqs: Bouquets, Simplified. LOVE that.) and witty sales pitch or cool shipping box. But because they have a nice (not overwhelming) amount of options, all good quality, all affordable. Their main gig is a bouquet for $40 shipped from their secret volcano lair in Ecuador (for reals…but NO shipping costs). And they just added a batch of arrangements from California for $50 for those more urgent “HOLY CRAP I FORGOT HIS/HER BIRTHDAY!” flower needs.

The Bouqs also has nifty features like Concierge Service, pre-orders for specific events (anniversaries, Valentine’s Day, etc), and larger bouquet options for all their collections. And if you don’t know squat about flowers, you can even pick them out based on color. Not sure it could get any easier than that.

One final plug before I remove my pitchman hat… If you click the ad in the side column up on the right, or on this little cute one below (yep, there) and order a bouquet, I get a little kick-back. Which means I can feed my child tonight. Or help send him to college. Or buy some flowers for Papa. How sweet would that be? 🙂

A FINAL NOTE ABOUT MEN & FLOWERS
Speaking of Papa, I’ve been with my current “boyfriend” for 16+ years, and there have been too many flowers exchanged between us to count. Some to our respective places of employment, most nowadays at home. When we lived in the city, we’d pick them up from the flower market on the walk home; now in the ‘burbs, at the supermarket. Nothing beats a big bunch of flowers to make the house smell, look and feel warm and beautiful. And after all these years, it never gets old to be shown you’re loved.

[Disclaimer: I received a free bouquet in exchange for this blog post/review. Regardless, I only recommend products or services I have personally used and believe will be good for my readers. All opinions are mine and/or JJ’s.]

4 responses to “Real Men Stop and Smell the Roses”