Hide-and-Seek with Mr. Moon, or How I Broke My Son’s Heart on Valentine’s Day 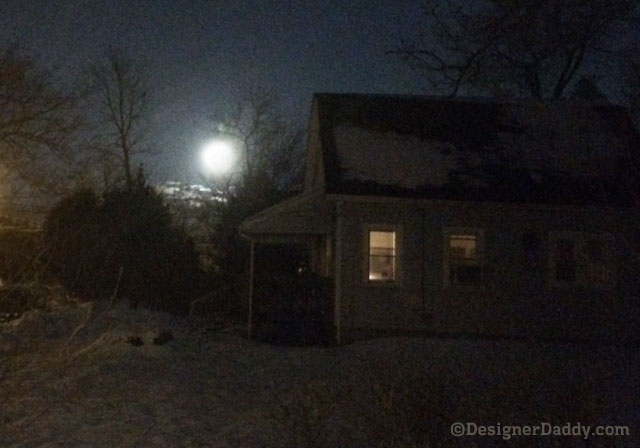 During the two weeks leading up to Valentine’s Day, Papa and I had both been away at conferences, overlapping by only a few hours at home, tagging in to take the next multi-day shift of solo parenting. A few days later Papa had to leave again for a business trip, during which time yet another snow storm dumped all over the East Coast, leaving him stranded in Chicago and me and JJ stranded indoors at home. Luckily we never lost power, though the snow was certainly deep enough and the wind windy enough. We did our best to entertain ourselves with movies, dinosaur puzzles, epic Ninja Turtle battles and cupcake-making. Yet a couple of times I felt cabin fever taking hold—so when the all clear came for the boy to go back to school, there was great rejoicing and sighing with relief.

The first day back was also Valentine’s Day, which also meant the class party. When I had originally signed up to bring cheese & crackers, I had also planned to attend. Having the schedule I do and being close by, I try to make it to as many parent-inclusive activities as possible. But I’d been so consumed with keeping my 4 year old busy and us from throttling each other, that I’d forgotten not just about the party, but the cheese & crackers, and also putting together the Valentine cards for JJ’s classmates. So we spent that morning signing, folding and stickering a couple dozen cards; then I quickly threw together the snacks and we headed to school—late, but just in time for lunch.

I’m sure I’d mentioned at some point that I was going to be at the party, yet I hadn’t reminded him, nor had JJ asked. Between the snow days and Papa being-away days, I was very behind on work and personal hygiene, so I decided to skip the party. Just a few days before, I’d attended the school sing-along — and while my son was initially excited to see me, after his class’ renditions of “Take Me Out to the Ballgame” and “Skinamarinkadink,” he quickly transitioned into full-on fussy mode, getting up constantly, whining for my phone and generally causing a ruckus while other classes were singing. Feeling I’d been a distraction, I gave him a quick kiss goodbye at the end and let him fall in line with his classmates as they headed back to finish the day.

So that was my rationale for missing the Valentine’s Day party: the kid likely wouldn’t miss me, and my absence might keep him from getting distracted or not listening to his teachers. Sounds plausible, right?

After showering and a few hours of work, I went to pick up JJ at the regular time. I hate being the last parent to pick up, however today I was. My son was sitting at a table with his teacher, going through an activity book. He looked up to acknowledge me when I walked in, yet I could tell he was engrossed, so I let him finish the page he was on before I initiated the “time to go” process. As he turned toward me, I swore I saw dark, heart-shaped bags under his eyes and a sugary pink hue to his pupils. My child was in a steep descent from a sugar high of epic proportions.

He ran over to show me the Valentine’s he’d gotten, stuffed to overflowing in his cubby drawer. As they spilled out of their construction paper heart basket, I scrambled to pick them up, at which point JJ started asking for a lollipop. Knowing “not before dinner” would be met with resistance—and knowing dinner was probably already a lost cause—I told him he could pick one and carry it out to the car. I explained that I didn’t want him to drop it in the snow or dirt, and that it would be difficult to get into his car seat while holding a sticky piece of candy. But all his sucrose-soaked brain heard was that I was going to never let him have any candy ever again and was in fact going to destroy all the candy in the world.

Needless to say, the short trip from Classroom 15 to the car was fraught with hollering and cajoling and eventual carrying the remainder of the way, to combat the dreaded limp body drop. We got to the car and I carefully avoiding jostling the lollipop (already open and sticky), made sure the car seat straps weren’t too tight over his puffy snow coat, and generally tread lightly so as not to upset the balance of my chemically-enhanced preschooler.

As I turned to close his door and climb into the driver’s seat, the now calm JJ spoke. As soon as he started to talk, I knew in my gut where this was going…

“Daddy… The party today was a FAMILY party.”

“All of the families where there…and you didn’t come… WHY DIDN’T YOU COME?!?”

What followed was the most soul-crushing, heartbreaking cry I’d ever heard my son make. Sure his emotions were heightened by the lack of a nap and an abundance of sweets, but this was a new sound I was hearing. The woeful cries of disappointment.

Instead of getting in the car to drive, in hopes the trip home would calm or distract him, I turned back and knelt down and held him and told him how sorry I was that I hadn’t come to his party. I was tempted to lie and say I didn’t know it was a family party—yet even if he’d understood it wouldn’t have mattered. He was exhausted and inconsolable and beyond reasoning with. I just let him cry and I held him as both our hearts broke a little.

I pulled back and promised him I wouldn’t miss any more parties. And as I got into the car and we started to drive, I reminded him of all the events I had been to, including the one just a few days earlier. Not to convince him that I wasn’t a big loser, but to remind him that he hadn’t been abandoned and that he could count on me in the future. To make him feel safe and wanted.

I retold an abbreviated version of this story to a friend with several older kids. And while she acknowledged the difficulty of the situation, she qualified it with “He’s got to learn disappointment sometime.” I don’t think she was trying to be callous, and I agree with her statement on principle. JJ’s certainly experienced disappointment many times from either Papa or myself, usually related to toys or TV or some other form of limit-setting. But this was different. He wasn’t angry. He wasn’t throwing a fit because he hadn’t gotten his way. He was sad. Because of me.

We continued to talk as we drove, his demeanor now starting to calm. Out of the corner of my eye I noticed the enormous moon and tried to point it out to him, but it slipped behind some houses as we drove on. I tried a couple more times, but because of the angle of his car seat or a house or a grove of trees, it was always just out of sight. At one point I considered continuing to drive, to just let him chill out, maybe even fall asleep early, as I had done many times when he was little. I decided against it, yet as we pulled into the driveway, JJ asked from the backseat if we could keep driving.

I backed out and headed towards our favorite sleepy-making route. I opened the cover of the sunroof and we continued to play hide-and-seek with the Moon, along winding roads and through some woods, even taking new turns in hopes of catching a glimpse of elusive Mr. Moon. We’d played this game before, so I reminded JJ that Mr. Moon might be waiting for us when we get home. To which he then indicated he was ready to return.

As we arrived home a second time, I felt much better about our moods. Our little adventure through the winter night had felt magical and left us both lighthearted and peaceful.

I helped my now-tranquil child out of the car and held his hand as we walked up the slippery, snow-dusted driveway. I cautioned JJ gently about not getting in the snow. In the tumult of leaving school, I’d forgotten to put on his snow boots and he was still in his sneakers. And of course he’d pulled off his gloves because he’s a four year old.

As we got to the top of the driveway I looked up and saw the Moon at the end of the block, hanging low in the sky in all his gigantic, blue-white glory. Excitedly I told JJ to look up and we thrilled that Mr. Moon had indeed followed us home. I stopped to pull out my phone to take a quick photo, dropping my son’s hand for merely an instant. In that instant, he lunged forward towards the Moon, stepping thigh-deep into the mound of snow that had been shoveled off the sidewalk in front of the house.

“HELP! HELP! HELP!” came screaming from his little lungs, echoing throughout the block, bouncing off every house within earshot. This was immediately followed by even louder cries of “OW!! OW!!! OW!! COLD!!! COLD!!! COLD!!!” as he fell hands-first and gloveless into the freezing snow.

I quickly snatched my once-again distraught child, scurried up the steps and plopped him down on our tiny porch while I simultaneously held onto his backpack, lunch bag and Valentines, struggled to remove my gloves, pull out my key, and tried convincing my son to put his icy hands between my knees so the cold (and the screaming) would stop.

We got inside and I swiftly stripped him of his cold and wet sneakers, socks, jeans, coat and hoodie, hurried him onto the couch in only his Batman shirt and Finding Nemo undies, wrapped him in a big orange blanket and gave him my iPad. Peace was once again restored.

Upon pondering this particular 40 minutes of fatherhood, I was initially reminded of how many emotions a four year old can pack into such a short amount of time. And while I was crushed by my son’s disappointment, I was cautiously proud of my ability to maneuver right along with his moods—comforting, guiding or distracting as the situation dictated. However this experience also showed me that while my son is still young enough to forget seconds later why he was upset or sad, he’s now old enough to notice when I don’t keep a promise. Lesson learned, my boy. Lesson learned.

Like a game of hide-and-seek with the Moon, navigating childhood can be simultaneously disappointing and joyous, heartbreaking and magical. And I treasure every chance I get to play along.

15 responses to “Hide-and-Seek with Mr. Moon, or How I Broke My Son’s Heart on Valentine’s Day”